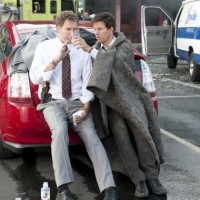 On the back of the DVD case for The Other Guys, esteemed film critic George Roush (of Latinoreview.com, but you didn’t need me to tell you that) lauds the film for being – and I pull quote – “The Funniest Will Ferrell movie since Anchorman.” Yes, the word ‘funniest’ was capitalized. I absolutely agree with that sentiment, and the fact that this is such a strong outing for both Ferrell and writer/director McKay is a major accomplishment after the shameful Step Brothers.

What makes this movie work so well is its commitment to being gleefully absurd, but with a straight face. That, and the fact that the movie is brimming over with jokes so that if one misses, there’s sure to be a winner soon to follow. But a lot of films dip into ridiculousness but don’t manage to come away as thoroughly enjoyable as this one – so what is the defining characteristic that sets this film apart?

I wish I could tell you. I watched the movie twice in a three-day period, hoping the second time to get a better idea of what worked for me when it obviously didn’t work for many of my peers. There are certainly some low points in the humor, I’ll admit. My friend Chris Meier pinpoints a few of these moments, such as a moment when a character makes fun of Ferrell’s red Prius: “See, it’s funny because he said ‘dental dam’.” Again, those faults are there but not nearly as often as they could have been. It’s interesting to note that the extended scenes in the unrated version of the film do not add lamely improvised moments, but are actually quite funny but push a running joke too far. Therefore, where some saw excess, I see restraint. Further, a great number of the jokes in the movie are much more clever than they had to be. Take, for instance, a moment where it is revealed that Hoitz (Wahlberg) is extremely talented in ballet. This revelation could be funny in itself, for it seemingly comes from nowhere. When he then claims that he learned ballet in order to make fun of a gay kid who lived on his block, the joke is extended. But the real high point comes in Gamble (Ferrell) looking quizzically at his partner: “You learned to dance like that sarcastically?”

I feel like this review could easily turn into a simple recounting of each of the funniest bits in the film and I don’t want to do that. Rather, I just want to express this idea that The Other Guys feels like a resounding success because of those several perfectly executed jokes (oh, to hell with it: the tuna story, the “Hero” jump, the song Gamble’s wife sings, Gamble’s appreciation of his cucumber water, the BB&B speech, the OTT opening sequence, the quiet fight, etc.) – which, in my opinion, far outnumber the misses. Especially when you think about the certainly all-improv atrocity that was Step Brothers, this movie feels like a masterwork of restraint and precision.

Also, I’ve noticed several critics trying to compare this film to Edgar Wright’s Hot Fuzz, which I think is a little bit of an unfair comparison. Although both films’ core objective is to satirize the action film genre, it still feels a bit like trying to compare Ghostbusters to Ghost. Perhaps that’s not the best analogy, but what I mean is that although the movies seem similar on a surface level, the way they approach their subject is vastly different. One leans heavily on references and stylized filmmaking, while the other aims more for unbridled eccentricity. Not that it’s wrong to compare the two movies, but thinking of it in terms of having to choose between one or the other leaves me uneasy. Both films are good at what they do. Both are very enjoyable.

One Response to “The Other Guys”