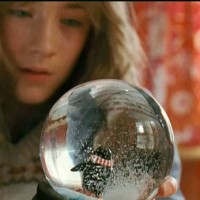 I have never read the novel by Alice Sebold which Peter Jackson’s film version of The Lovely Bones is based off of, so I cannot make comparisons between the two versions of the story and I cannot say with any certainty what Sebold intended to convey with the story. It is the story of a girl who is raped and murdered (only murdered in the film version), yet watches over her family and murderer from a sort of What Dreams May Come style Limbo. The mistake that the critical community has made when responding to the film is in thinking that the point is to put the clues together in order to solve the crime, like this is a pre-teen version of Ghost, or else likening the girl’s eventual acceptance of her position as an implied gratefulness for murder. Instead, working through grief (“obsession”) from both sides of the veil, the way that the girl’s family reacts to her demise and the way that she herself copes with the change.

Which is not to say that the film doesn’t deserve the derision it’s received. I found myself mostly enjoying the experience of watching the film, but it doesn’t make up for the fact that the vast majority of the plot is handled very poorly. We meet the murdered girl, Susie Salmon (Saoirse Ronan, Atonement), before she meets her unfortunate fate. She’s a normal teenage girl, except that she has a strange infatuation with a weird British kid in her class whose skin sparkles and who talks like an adult in a romance novel. I suppose the argument could be made that we’re seeing him from her perspective, all dreamy and unreal, but there hasn’t been any other indication that the images on-screen have been colored by Susie’s perception of them until this point, so it seems a difficult argument to defend. Her grandmother is played by Susan Sarandon, in a needlessly wacky performance that distracts from the more somber moments to come. There’s even a musical montage of her being a bad housekeeper, although I know not what purpose this serves.

Later in the film, Susie’s father (Mark Wahlberg) and her sister Lindsey begin to suspect that their neighbor may be responsible for Susie’s murder. There is nothing to drive this suspicion other than intuition, which makes their furrowed-brow glances at his home seem entirely unreasonable. Mr. Salmon, in particular, helps the neighbor build a duck blind in his back yard and somehow that alone gives him all of the proof he needs to kick in the man’s back door, clamoring to wrap his hands around the neck of his daughter’s killer. Perhaps it was just serendipity that this man actually was the killer, but Mr. Salmon’s acts were simply those of a man who needed someone to blame and were not truly motivated by any real knowledge. It’s a real stretch to interpret the film in that manner, as there’s nothing to suggest that this is the case. All we get is a memory of Susie taking photographs, which in turn leads Mr. Salmon to conclude that he knows the culprit. Similarly, Lindsey only knows that the man is creepy yet feels that this is justification enough to break a window in his house and search through it for proof that he is the murderer. When the man arrives home suddenly, he immediately stops and listens intently upon making it inside the house, trying to pick up the slightest noise from upstairs. Does everybody in this movie have ESP?

On the other hand, the film is gorgeous. Though it doesn’t match What Dreams May Come in terms of visual spectacle, Susie’s version of Limbo does is nevertheless a breathtaking special effects extravaganza. When the two worlds collide are among the most fascinating – for instance when Susie, immediately after her death, stumbles through city streets which flicker in and out of the colorful world of the living and the gray world of the dead. Or, more disturbing, when she walks into a brightly lit bathroom and sees blood and carving implements all around while a man lies, face covered in dirty water. I don’t fault the film for not showing the murder taking place because this sort of imagery still packs a punch (and reminds me slightly of similar eery dream sequences in The Cell). There’s a great moment where Susie stands in a gazebo in the middle of a cornfield, crying her father’s name while he brushes by searching for his daughter’s killer. So the mechanics of how he knows the the killer’s identity are off, but the tension of the chase coupled with fantastic set design make it a marvel nonetheless.

And at the center of it all is Saoirse Ronan. No matter how silly the story gets, her calm whispers and shocked expressions carry the emotion of the scene. My favorite scene from her has a group of children urging her to go towards the light, to cast off her obsession with the physical world and move into the next plane. In close-up, her eyelids tremble slightly and she confidently states, “Not yet.” But even more than Ronan, the element that really sells the film as more than computer-generated theatrics, is Stanley Tucci as George Harvey, the Salmons’ neighbor and their daughter’s killer. My respect for Tucci has grown enormously since I first became aware of the man’s powerful presence (when I saw Julie & Julia for Round I of ‘The Letter Game’). Here, he plays a man totally unlike his typical persona, with a garbled voice and charming smile that hides a monstrous underside. You might be forgiven for thinking that he’s truly the main character, as Tucci brings so much charisma to his role that he’s infinitely more enjoyable to watch on-screen than Susie’s parents, with whom we should really be commiserating.

But it also comes back to the fact that Susie discusses the man in a matter-of-fact nature. She does grow toward rage later on, when her father seems close to cracking the case, but in narration she speaks about him with the calm wisdom of one who is unaffected by him. It’s interesting to note that it was by test audience suggestion that Harvey’s story was given a conclusion that feels like an appropriate justice was served. Before this, the finale was open-ended, and I think it’s precisely because catching the killer wasn’t really important for Susie. What was important was taking the time to grieve for her loss and move forward. I think that’s an intriguing concept, the dead coping with their loss before moving forward. The movie doesn’t always handle this well, but there’s such beauty in those moments when she has the opportunity to address her killer’s crimes head-on, but chooses instead to soak up the moments of bliss that she can still manage. It doesn’t mean that Harvey shouldn’t be punished for his deeds, of course; just that there’s nothing that finding the evidence can do now, a fact which Susie grows to acknowledge gracefully.

There’s a lot that The Lovely Bones does wrong, I admit, some of which is easy to laugh at for its awkward cluelessness. But those moments when things seem to come together beautifully – when the acting is extraordinary or the tension is tightest, when the themes develop into more than surface-level symbolism or when the special effects really do rival other dream/death-state pictures – that’s when I find myself enjoying the film despite its flaws. It’s a messy movie, sure, but it’s got a heart that won’t stop beating.