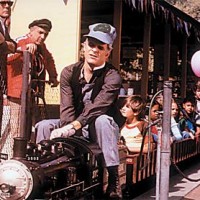 When I first saw Carl Reiner’s classic comedy The Jerk, I compared it to “Weird Al” Yankovic’s opus “Albuquerque”. The song tells a long, convoluted story of a man who, among other things, survives a plane wreck. He crawls out of the wreckage, for three full days, carrying with him, “My big leather suitcase and my garment bag and my tenor saxophone and my twelve-pound bowling ball and my lucky, lucky autographed snorkel.” This tendency toward the absurd is apparent in Reiner’s film, and it often pushes on further than one might expect.

Although, to be honest, I feel like it will be difficult to discuss the movie much more without simply relating the many, many hilarious scenes throughout. It’s a bizarre trip full of marvelous one-liners. Okay, maybe I can give you a taste. The movie relates the story of Navin Johnson (Steve Martin), who we meet as a homeless man living on the streets. It may seem like he’s lost everything, but he still has his friends and his thermos. Navin begins to tell his sorry tale, of how he grew up a poor black child and then set out for adventure when he found that he could really get into the beat of the easy listening station broadcast out of St. Louis. From there, it’s a wacky stream-of-conscious type trip that leads Navin all over the country, leaving one area with as much ease as he arrives. He finds himself in a new locale and seamlessly begins his life anew there each time.

And all the while, we have Navin at the center of it, a total buffoon who nonetheless makes it through the world by latching onto people who are similar to him, or else need something else out of him enough that they can look past his handicap. And what is his handicap? Being a living, breathing cartoon character. When his employer offers him a place to sleep, the room is located behind a gas station’s bathroom. Upon entering the bathroom, Navin lights up with amazement, detailing how he can fix the place up and put in bookcases and turn the bathroom into a great living area. This boundless optimism and cheerfulness makes the character likable even when he does things that would otherwise be repellent.

Roger Ebert’s review of the film criticizes it for relying on what Ebert terms Funny Hats vs. Funny Logic (unfortunately, this delineation never really caught on with the masses), wherein the movie allegedly thinks it’s funnier to have characters wearing a hilarious get-up than it is to detail some extensive backstory which will make the joke more integral to the scene. The line is not simply drawn at prop comedy, though, as he claims less enthusiasm for any movie that finds humor in the “what” rather than the “how” of any given situation. I can understand that sentiment to some degree, and I point to the endless stream of Friedberg-Seltzer videos (Epic Movie, Disaster Movie, Date Movie, Meet the Spartans…) as a reason why. These movies simply acknowledge that some pop culture item exists and expect that to stand in for a joke. I think that what Ebert misses is a third category of humor, let’s brand it Discord Comedy.

Okay, so part of the joke is that Steve Martin lives with a black family. He’s white, they’re not, ha-ha. But the joke is pushed further and works better because it doesn’t stop at that superficial level. Navin is a true part of the family, and despite his pale skin is not treated any differently than anybody else in the family would be. The other characters in the family begin as an easy joke, loud black stereotypes singing songs on their front porch, but quickly become their own individual characters – something that one would probably not expect. Another example: when Navin has a girl over to his place, she comments on the artwork, as he has an advertisement for a weird food product (Cup o’ Pizza) hanging on the wall. That’s a joke in and of itself, but then the camera pans out to reveal that the two are actually eating Cups o’ Pizza and Navin explains how the previous Cup o’ Pizza guy was driven out of business by the current retailer. It defies your expectations for that extra zing, which is extraordinary.

Now I don’t mean to imply that there are only 3 types of comedy in all of existence. My critique has shifted its focus onto Ebert’s false dichotomy. What I’m trying to show here is my belief that The Jerk is a great film that works in a multitude of differing ways to provide an insane character who is on a mental journey. And despite the fact that the movie seems most interested in jokes over story, the film moves the entire time toward its abstract goal – that is, Navin’s need to find a beat he can dance to. It’s easy to see the character as stupid or out-of-touch, and he is, but a lot of his problem is that he simply cannot function in the same way that the rest of us can. His quest, then, is not just one of exploration in order to get out and see the world, but is also to find and be comfortable with himself. The final scene not only provides a bookend to the film, but it’s cathartic in the way that the character of Navin has literally found the beat and feels at home once again.

But all of this is needless over-scrutinization. I like The Jerk because it makes me laugh. A lot. It’s a super odd, funny, funny movie. That’s all I really have to say.

One Response to “The Jerk”