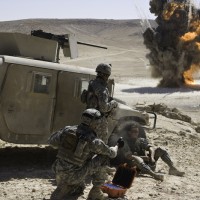 It was certainly interesting to have watched Quentin Tarantino’s Inglourious Basterds the night before watching Kathryn Bigelow’s The Hurt Locker, as the two films can be put in easy comparison for their strong use of tension in creating powerful scenes. The difference between the two, though, is that Bigelow’s scenes of tension are all build-up with no release – unless you count as release the fact that the protagonists didn’t die… this time.

It’s all about Staff Sargeant William James, a man who knows how to handle bombs. He’s defused some 800 bombs in his career and with any luck will defuse another 800 before all is said and done. When a bomb squad loses their leader to technical difficulties, James steps in to take the lead and finds himself at odds with another member of his team, Sargeant JT Sanborn. You see, James doesn’t play “by the rules”. When he sees a car loaded with huge bombs, he takes off all of his protective gear, claiming that he’d rather die comfortable if the bombs explode. When Sanborn’s constant worries about safety get on James’ nerves, he removes his headset and works without any aid.

Bigelow uses a shaky, hand-held sort of style in filming the action, which I suppose was intended for the sake of realism. The movie takes place in Baghdad during the height of the Iraq War, and the idea is to put the viewer in the streets of Iraq… to give the audience that constant fear that any scrap of paper on the street could be concealing an IED. To create the anxiety that every person staring with wonder out of their window at the uniformed soldiers in the neighborhood could very well be the person responsible for planting the bombs. And to a certain extent, that works. Literally or figuratively, the clock is always ticking for this bomb squad, and the desert towns of Iraq seem to be lawless places where a bullet could come flying from nowhere before you have a chance to react. Every day that passes is another miracle – the miracle being that you survived.

Or maybe it’s just a whole lot of fun, which is the way it seems for James. His carelessness doesn’t take the movie anywhere, and even though the camera style appears to be intended for a realistic take, James is treated like an invincible action hero. Near the end of the movie, he actually walks out of an airplane with a look of determination and hard rock music accompanying his departure.

Perhaps more interesting, though, is the way that none of it seems very pressing. Even when the boys get into a shoot-out on the side of a sand dune, the thing that registers is not the immense danger but the amount of time that they spend waiting and watching. Other, nameless soldiers are picked off one-by-one, but our three bomb squad heroes calmly keep an eye on the prize. Even when an enemy sniper has them in sight, the sniper politely waits for the good guys to fire at him before trying to retaliate. In a later scene, James and his squad walk through a scene of destruction in the darkest of night, lit only by the flames from an exploded gas tanker. Women are wailing and men are lying on the road with limbs blown off, and yet… and yet it all seems so impersonal. The realism that the movie is striving for just isn’t there, and the characters and/or their relationships don’t have a lot going in their favor either.

Actually, I take that back. There is a B-story about Specialist Owen Eldridge and his reservations about their mission. James’ shenanigans serve to annoy Sanburn, but Owen is visibly disturbed by how close the danger truly is. Some scenes show him meeting with an Army therapist to help counsel him on the semi-trauma that he must be going through on a daily basis. Despite some corny explications of his emotions, Owen’s story feels the strongest. His worries are mostly internal and the way that his story progresses (especially after his therapist joins him on an outing) is especially rewarding. But then it’s all lost in the final act, when Owen begins acting like a totally different person.

But aside from Owen’s story, there is little of real worth. Yes, there are moments of intensity when the three guys are trying to defuse a bomb, but that tension is unearned and never has any real resolution. It’s like when people spontaneously burst into song during a musical – it feels suddenly obligatory, even if the music is quite good. Is that what is supposed to be so real — a lot of nothing and then the threat of death?

Regardless, it doesn’t work half as well as it should have. I left feeling as though I had been dragged along by the movie instead of swept up by it.