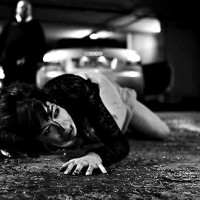 While The Human Centipede II is certainly a lot more gruesome and violent than its predecessor, and by virtue arguably a lot more deranged, to call it “an affront to human decency” or to ban it outright on the basis of the film being obscene are to give writer/director Tom Six far too much credit. The movie revels in being gross, it smiles at sadism; we knew that going into the theater. There’s a significant amount of violence shown on-screen, but it’s off-set by the cartoonish antics of the main character, Martin, a man who seems to be the spawn of Jabba the Hutt.

The first in the trilogy (yes, there’s another one coming) garnered a lot of buzz on the internet largely because of the unique premise: a mad scientist captures three people and intends to turn them into what he dubs a “human centipede” by surgically connecting them, mouth to anus. The logistics here don’t make a lot of sense, as he expects the second and third “segments” to feed off of the excrement of the first. Certainly there’s no nutritional value there – how does he expect his creation to survive? Well, I suppose that’s why they call them mad scientists. But the film was more cultural oddity than anything, inspiring surface-level, ironic responses without any regard for the meat of the movie. Those who actually viewed the film found it be a lot more tame than expected, propelled by Dieter Laser’s powerful performance as our mad doctor, and with a level of artistry which if not exceptional is nevertheless unexpected.

The sequel begins right where the first movie left off, minutes before the final moments a la Rocky II. The camera pans out to reveal that The Human Centipede is being watched by parking garage attendant Martin in his little booth. The credits of the first film begin rolling – “Directed by Tom Six” – in a winking way of connecting this installment’s beginning to that one’s ending. It becomes clear, from a scrapbook that the mute Martin keeps with pictures of the film and its stars, that he’s a little obsessed. His squawking mother and a hands-on psychiatrist provide exposition since Martin cannot or will not talk. “He keeps talking about a centipede with 12 people,” his mother complains, and the good doctor brushes it away as a manifestation of his dismay over having been sexually abused by his father as a child. This movie is really an argument in the ongoing nature vs. nurture debate.

In any case, Martin sees a couple fighting in the deserted parking garage he has been assigned to and approaches them silently. After being berated for his hideous physical appearance, he clubs them both with a crowbar and throws them in his van. The ease with which Martin accomplishes this is the first absurdist aspect of the film. I couldn’t help thinking about the blood soaking into the concrete, wondering how he would be able to clean that up or explain it away. There is no explanation for this, which some might see as a sign of the film’s weakness. There are multiple scenes where things come together perfectly for the protagonist, and there are many lines of dialogue which seem laughably one-dimensional. Despite that the parking garage is continually deserted, there’s always one car – one more person that Martin can club over the head or shoot in the leg and take back to his lair. The lair being a disgusting warehouse, complete with lightbulbs that crackle off and on because, hey, it wouldn’t be suitably horrifying if they didn’t, now would it?

Doesn’t it all seem a bit too, I don’t know, perfect? It’s easy to interpret the events of the film as being entirely a dream sequence. Somewhere near the mid-section of the movie, Martin approaches his psychiatrist being serviced by a prostitute in the garage. He shoots the driver and fires at the call girl as she runs away, while Martin’s doctor calmly dresses himself and tells the man-child that he’s behaving irresponsibly. Ya think? This moment, above all others, feels the most unrealistic. Nobody’s reaction would be so blasé after seeing two people maimed or murdered. This interpretation of events makes for a juicy contradiction: there’s a level where the centipede procedure is marked by a tighter sense of realism, but overall the, ahem, full sequence of events rings false. In keeping with the self-referential nature of the movie, Martin tries to keep his victims’ mouths shut with duct tape as he collects the twelve people necessary for his diabolical plan, but one man struggles free and screams, “It’s a film! The Human Centipede is a film!” This is more damning than when people call him a ‘retard’ or a freak.

But as we round the corner into the second half of the film, we indeed get what we were all waiting for: the creation of the human centipede. Because Martin is not a doctor, and because this is “not” a movie (bwahahaha!), this process does not go as smoothly as it did for Laser. There’s no quick cut to the final product, but instead the agonizing lack of anesthesia as Martin goes about severing his twelve victims’ tendons, carving flaps in their buttocks to connect to the next in the line, and so forth. Because of his lack of surgical skill, his victims are often screaming through their duct-taped mouths while being mutilated. Still, once you get used to the violence (desensitized to the violence?), it becomes commonplace. There’s a scene where Martin smashes a woman’s skull with his trusty crowbar, but the moment feels much more light-hearted than you might imagine for such a grisly act.

With a little bit of elbow grease and improvisation, Martin makes his dream come true (?) and gets the centipede he’s always wanted. It may sound like I’ve given away a lot of the film, but there’s so much more black-and-white, bloody violence and disgusting goings-on that I have yet to mention. The zeal with which Martin attempts to recreate the “feed her” sequence from the original film is brutal, and there’s a repugnant and hilarious childbirth scene (yes!) that doesn’t just cross the line – it leaps over the line gleefully after a running start.

As an entry in the so-called “torture porn” genre, The Human Centipede II stands out for only one reason: it is a sequel to The Human Centipede. Without the context of the first film, perhaps the movie would be closer to the artless mess that Ebert and others see. It’s easy to imply the “it was all a dream” reading, but it means a lot more here because The Human Centipede itself was truly all a dream within the context of this film, i.e. the dream of a man named Tom Six, turned into a movie that Martin obsessively viewed. And I just realized: technically, Tom Six himself is a character within the universe of this film. Those sorts of thoughts, that sort of connection is what makes this entry more than just a silent parade of gore.

Then again, why am I trying to argue that there’s another level to this film? You hold a parade for the sake of holding a parade, not for emotional depth.