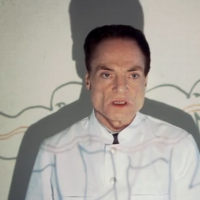 There’s really only one reason anybody would want to watch The Human Centipede, and that’s for the sheer novelty of it. It’s like watching a Uwe Boll film or Tommy Wiseau’s The Room or whatever other D-grade flick is making the rounds in pop culture’s consciousness right now. It’s called The Human Centipede, for chrissakes, and it’s about people being sewn together ass-to-mouth! The teaser trailer for the soon-to-be released sequel has director Tom Six bragging about the fact that there are people who are sickened by his film and consequently loathe it. It’s clear that this is not intended to be a great work of art.

But somehow the movie actually works on a level beyond being simply peculiar. There are three reasons for this.

The first thing that sets the film apart from the camp it sells itself as is the fact that it’s genuinely kind of creepy. The set-up is tired as hell, of course, with a couple of American tourists getting stranded in the middle of nowhere when their car breaks down on a vacation in Germany. The girls don’t want to wait in their car for morning, so they trek out into the woods rather than following the road and wind up at the house of the demented Dr. Heiter. Since we, the audience, know the title of the film and know what it’s about and have seen the grave outside of the house dedicated to Heiter’s “beloved three-hound”, the sense of dread is evident. And though the idea itself is absurd, the movie sells the idea of the human centipede by giving a graphic explanation of the creation process. I’ll tell you right now, if you’re looking for gore, you’re not going to be satisfied. The movie relies more on insinuation and implication to get its horror wheels turning. Ah, but it works. And though we know that it’s extremely ridiculous, the situation frightens still by being, I dunno, I guess maybe possible? We can imagine ourselves in the same situation, which is the draw of the set-up to begin with. Hey, that could be me as a stranger in a foreign land being abducted and abused by a criminal who will never be found out.

But this was all done on the cheap, and the fact that the connections of the human centipede are conveniently covered throughout the film by bandages is probably as much a necessity of the budget as it was of specific intent. Say what you will about Six, he at least has enough skill to make an otherwise cheap movie look as though it was slickly produced. But what helps sell the movie’s scares when the film must traffic mainly in speeches rather than bloody surgery, is the film’s star Dieter Laser. Laser plays the sadistic Dr. Heiter like he was born for the role, with a grim look and clenched jaw similar to that of Michael Shannon (Look ma, I’m already casting the re-make! Jennifer Aniston as the middle piece?). He delivers most of his lines in German, but the language barrier isn’t a problem for the actor – even though, as an English-only speaker, I can’t understand Laser’s creepy line readings demanding that his guests drink their drugged water, it’s all too easy to feel the character’s mad urgency. Heiter isn’t a mad scientist in the conventional sense, not the wild-eyed and crazy-haired scientists of yesteryear who cackled maniacally and drew on the power of lightning bolts. No, this character is disturbed in a much more deeply-rooted way. He’s the kind of mad scientist who can pull out all of a woman’s teeth with a pair of pliers, then wipe his brow and enjoy a cup of coffee with the morning paper. He’s not the type of mad scientist who thinks of himself as a mad scientist, and Laser is incredible in the role because he seems to understand that. He’s like the poor man’s Christoph Waltz (of Inglourious Basterds). Do you hear this, Hollywood? I’m doing your job for you!

Still, The Human Centipede does retain some of its camp charm. I found a lot of laughs in the fact that Heiter is a normal person aside from his bizarre hobby. Look at the set design, particularly in the good doctor’s kitchen. There are bottles of dishwashing liquid, pots and pans, a rolling pin. Can you imagine this madman in the nights before these tourists showed up at his door? Can you see him sitting alone in his two-bedroom 1.5-bath house out in the woods, cleaning dishes by hand and putting them in his cabinet? There’s a point in the film where he actually hires some men to come to his house and replace a window! Step back and think about that for a moment; think about Heiter as a man who went to his phone book in order to call a glass company, who wrote them a check and had to balance his checkbook. Think about when his victims accidentally spill drugged water all over the place – is he angry because they’re not consuming the drugged water and losing consciousness, or is he angry because, well dammit, now he’s the one who’s going to have to clean that up? Think about all of the incarnations of Dr. Frankenstein that we’ve seen over the years. Would Frankenstein ever do something so normal as purchase picture frames to keep photos of his loved ones near his bedside?

A lot of that is my own interpretation of the movie, though, but the film even embraces it campy side without the need for over-thinking it in that way. There’s Heiter’s amazing delivery (“You are the middle piece!”), of course, but there’s so much more that is so much more insane than that. A trucker inexplicably stops on the side of road just behind Heiter’s vehicle at the beginning of the film so that he can take a dump in the woods just out of sight of the other motorists. In broad daylight, Heiter pursues him with a rifle. The continued references to the three-hound, which Heiter dearly loved, are also particularly funny. But most memorable of all comes a moment when one of the girls escapes from Heiter’s clutches before the surgery. She stumbles up the stairs and reaches a window with the curtains drawn. Intending to jump out the window and run to safety, she throws open the curtains only to find a blank white wall behind them. The mood of this scene is coiled tension because we’re afraid that Heiter could find her at any moment, but taking a moment to stop and consider the situation left this viewer wondering, “So wait, he just has curtains in his house over the wall?”

The whole thing comes together in an almost pitch-perfect final sequence, combining both the despairing terror that Six is trying to sell and the absurd, gaping plotholes that the film is unconcerned with hiding. The Human Centipede certainly isn’t an expertly made film, but it does several things much better than I ever expected it to. It’s been positioned as an oddity, a conversation-starter at most. Though not award-worthy or intended to be taken seriously, Six’s film is effective at being very entertaining. Given its apparent goals, I’d say that that’s high praise.