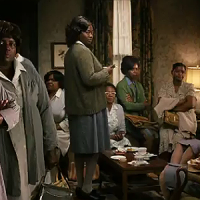 Much has been made of the tendency of feel-good end-of-summer film The Help to, ahem, whitewash the horrors of Southern segregation. Though it purports to tell the story of black maids in Mississippi in the era just prior to the boom of the Civil Rights movement, the central character somehow remains the indignant white woman (Emma Stone) who the film seems to believe should be celebrated just because she is not a horrible racist (the audience can pat itself on the back, too). A scene late in the film where the black maids detail her virtues is unnerving, as there’s no sense that the film feels any guilt in putting its characters in the role of the magical negro. As the movie tells the story of these women who are put upon and treated as less than human by their employers, its focus tends to remain on the cry from the classy white women for separate (but equal!) toilets for their maids, and the way the maids are pulled in multiple directions or generally considered inferior. Any indicators of the true depravity of the time are left off-screen: though multiple killings are mentioned, they are only spoken about. The closest the movie comes to addressing the true nature of what Jackson would be like to live in during that period comes when a black woman is arrested without any given reason and beaten with a police baton – we only witness the officer raising his arm.

But again, this has been covered already. Plus, I do wonder slightly whether I would have been as concerned with those sorts of goings on if I hadn’t been predisposed to feel that way (for the record, I’ve determined that the answer to that question is yes). Still, perhaps more offensive than its gutless depiction of the Mississippi of more than a half century ago are the choppy editing and poor handling of the multiple layers of story. It’s a sob story which wrenches tears out of its viewers with music cues alone, denying the story the ability to build to the crescendos that were possible. A powerful performance by Viola Davis stands at the center, saving the film from being altogether forgettable; but even with that caveat in mind, the moment which had the potential for the greatest weight (when Davis’ character describes what happened to her son) is ruined by a lack of follow-through on the part of the film as a whole. What I mean is that I can tell you, say, that my parents died in a skiing accident, and this will no doubt be shocking. But without knowing my parents, without having some sense of who they were as people, there’s no emotional attachment there for you.

Of course, that’s where Davis’ passionate retelling of the tale comes into play, but there’s only so much that can be accomplished when telling such a story from whole cloth. This is now the place where music cues take over and I want to be very clear here: I am not saying that the use of music to enhance the resonance of a scene is wrong. However, when you are cognizant of the scene’s weakness otherwise, the accompanying score feels inappropriate. Think of a television show that you find very funny. If it has a laugh track (or a recorded audience response), you may often not notice it or even appreciate its inclusion because it aids in focusing the scene. But now think of a television comedy that you can’t stand, which you don’t find funny in the least, and the laughter of the audience feels suddenly irksome. It’s the same principle between the shows, but because you’ve found less admirable in the latter, you begin to note discord.

With that said, let me note some discord. The most striking instance, for me, involved a character named Celia (Jessica Chastain, Take Shelter) who harbors a horrific secret that she’s been covering up (wink wink) from her husband, only allowing the truth to be revealed to her maid. Sources tell me that this subplot was given much more weight in the book that the film was based on, but the movie does absolutely nothing with it. The particulars surrounding this C- or D-story are only put at center stage for one moment, one that expects the viewer to feel extreme sympathy for Celia without selling us on her plight. In a similar fashion, our heroine Skeeter (Stone) has a superfluous relationship with an extraneous gentleman who may or may not have a drinking problem. The film has no idea how to handle their relationship, utterly fails to convince the viewer that there’s any substance to it, and lets the whole thing trail off from there. Finally, there’s an incident alluded to multiple times throughout the movie, something which caused Skeeter’s maid Constantine to leave suddenly. When the full story of the incident is ultimately revealed, it is staged with such a bizarre lack of intensity so as to be entirely unmoving. Skeeter’s mother later begs her daughter’s forgiveness for being racist, and this too comes across as arbitrary and out of step with the reality of the situation.

Davis indeed takes the lead, though; the only truly powerful scene in the film involves a tearful conversation between herself and a small child, and a significant portion of that poignancy may be credited to the fact that crying children pull at your heartstrings as a rule. In addition, it comes back to what I was saying earlier: over the course of the film, we have gotten to know Abilene (Davis) and the toddler she cares for by seeing them interacting in multiple scenes. When their moment of sadness arrives, it maintains its strength because of the gradual build-up to that moment. This, and a similar capping moment wherein Celia responds to her maid’s generosity, stand better under criticism because they are a seemingly natural progression from the movement of the plot beforehand. I find this much more interesting than the sudden, jerky will-they/won’t-they question of whether Skeeter will be able to complete her memoir collection in time for publishing.

There aren’t many reasons to recommend The Help. I could say that the parts are greater than the whole, but that’s only partially true. The parts are generally just as aimless as the whole. But those parts which are better are much better. It’s a bad movie made bearable by infrequent flashes of sincerity.

3 Responses to “The Help”