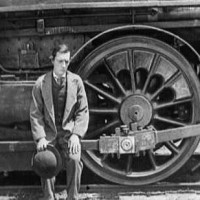 Buster Keaton’s epic comedy The General is now 85 years old. I have no doubts that it will remain one of the best comedies ever made even after a century – an extraordinary feat, to be sure, but the man was a genius. As writer, star, editor, producer, and co-director, Keaton’s fingerprints are all over this amazing piece of work. This is a must-see.

Being a product of the 1920s, the movie is in black and white and silent (with the exception of the accompanying score, which changes depending on which print you view), a fact in and of itself that needlessly turns a lot of people off of great films like this. Keaton was a master of his art form, though, and would not function as well in a talkie – that fact became painfully clear with the release of Free and Easy in 1930. Nicknamed “The Great Stone Face”, Keaton delivered his performances with a uniformly deadpan air – when something is amiss, his character will invariably look to the camera, blink thrice, then react openly to it. It’s the same effect that Wile E. Coyote uses when he walks off the edge of a cliff – a moment to consider the situation before the plunge. While he would certainly not be suited for the current day and age, Keaton’s mastery of his art makes him one of, if not THE, greatest actor of the era.

Though there are elements of a love story in The General, as well as most of Keaton’s films, the movie is above all else a comedy – an a thrillingly action-packed one, at that. A train crash near the end of the film was executed in real life, and was the most expensive scene ever shot in film at the time. But it’s not just big events like that, or the famous house-falling scene from Steamboat Bill, Jr. – Keaton’s films are action-packed throughout, owing largely to the star’s ability to take a beating and keep on going. Keaton did all of his own stunts, and his movies are brimming with stunt work. He’s constantly jumping off of things, jumping over things, tumbling, falling, getting knocked flat, and yet getting up again. It’s almost as though he wasn’t happy with his work unless he was somehow putting himself in danger. This commitment to his work pays off, though, because the man created a slew of breathtaking shorts and feature-length films which are as exciting for their comedy as they are for the skill with which they were formed.

Of the comedy, I could point out dozens of specific instances and still not have ruined the film for you – the movie is a string of gags, each as engaging as the last. I can’t watch The General without grinning.  When Johnny Gray (Keaton) goes to enlist in the Confederate army to prove his bravery to his girlfriend, he is turned down because, as the engineer of a train, he is more useful to the South in his current post. This is not explained to him, though, and he sizes up the other enlistees to figure out what it is that kept him out – even squeezing the stringy arms of one man who is clearly more diminutive even than Johnny himself. When a group of Union soldiers steal his train, Johnny calls a regiment of Confederates into action, loading the whole group onto one of the cars of a second train before starting off… leaving all of the soldiers behind, as the cars were not connected. While throwing sand on the train tracks to give his engine more traction, he spots a bug and comically stamps on it, unaware that his vehicle is leaving without him in the background. As Johnny follows the Union soldiers, firing upon them and otherwise keeping in hot pursuit, the leader of the opposition refuses to turn back to fight, assuming that his men are outnumbered by their pursuer – when in fact, there is but one man on their tail. After Johnny lights a cannon to fire over his engine toward the enemy, his leg gets caught in the connector between the two cars; as he struggles, the cannon lowers itself until it is pointed directly at our hero. Returning to my earlier comparison, it’s like a live-action scene from a “Looney Tunes” short. Needless to say, Keaton stares at the cannon pointing at him for a moment, before scrambling out of its trajectory.

Lest you think that The General is only good for exhibiting Keaton as a clown, think again. As a whole, the film is extraordinary. It’s almost hard to believe that the movie was shot nearly a century ago. Every shot is filmed from multiple angles – and as the bulk of the film is a stupendous chase sequence with trains, this means that this required several cameras moving along with the vehicle in different areas. That alone is amazing, given the time that the movie was produced, but in addition there are countless stunning images. One of my very favorites comes when Keaton sits on the wheel of an engine and is oblivious to its movement – it’s a gorgeous shot. Or how about the cannon scene, as the camera sits behind the weapon – the lit fuse fizzling in the foreground, Keaton climbing out of danger deeper in our field of vision. The scene itself is a wonder; the addition of that shot makes it all the more dazzling. Later, Johnny has difficulty chopping wood to fuel his engine – speeding along with an ax flying – as the opposing armies square off behind him. The action, the events, the comedic sensibility of that moment… god, a simple description cannot do it justice.

All of this, mind you, is not to brush off the huge contributions that Keaton’s co-stars made to the film. Although the Union officers remain nameless baddies, they often do as much physical stunt work at Keaton himself. And Marion Mack, as Johnny’s love interest, is stellar. She seems quite comfortable doing comedy – there’s a great scene where she polishes and pats her brother’s army medals in order to attack her boyfriend subtly. Later, she does as much jumping and falling and getting drenched in water as Keaton himself would. Everybody is game, everybody believed in the project, everybody contributed to what is, ultimately, a masterpiece. The General isn’t necessarily my favorite of Keaton’s work (that would be The Cameraman), but it is Keaton’s most iconic. It’s a marvelous film, easily accessible and even easier to appreciate. It’s an all-around fantastic movie.