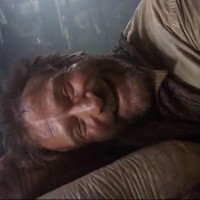 Director Terry Gilliam (Brazil, Fear & Loathing in Las Vegas) had an intriguing drama in 1992 with The Fisher King, but unfortunately it is thrown off course by the tendency toward lowest common denominator humor – largely embodied by any scene in which star Robin Williams attempts to be funny. When Williams goes into a monologue about a mystical bowel movement he once had, it took all my willpower not to take an axe to the screen, and yet – proving that truth really is stranger than fiction – the man was nominated for an Academy Award for this performance.

When the film hews closer to its dramatic roots are when it is at its best. The opening scenes are a marvel, with an outspoken radio deejay (Jeff Bridges), in the vein of Howard Stern or Eric Bogosian’s character in Talk Radio, joking that yuppies are less than human and ought to be put out of their misery. The deejay, named Jack, goes home to practice his lines for a sitcom pilot for which he’s about to audition. After spending the evening repeating the phrase “forgive me” with a hundred different inflections, he turns on the television to find that one of his listeners has gone on a shooting spree in an upscale bar, killing several people and thereby ruining Jack’s career. The set-up and pay-off here is exquisite, and it immediately made me think that I would wind up loving the film.

But then, enter Mork, and that’s when things begin to lose steam. Williams plays Parry, a homeless man who suffers a severe mental disorder due to the death of his wife years before. He believes himself a knight, on a quest to reclaim the Holy Grail from a billonaire who lives in a castle in the middle of New York City. On occasion, he sees visions of a red knight – an macabre villain who straddles a steed which breathes fire from its nostrils. The red knight is a magnificent vision, even if the metaphor is embarrassingly flat. As Jack, who is obsessed with his own pain, comes to know Parry, the two slowly become friends. Jack assists the man who was wounded psychologically by his wife’s death in hooking up with an awkward woman (Amanda Plummer). Once again, if you look past the strange creepiness of the situation – a mentally deranged man who stalks a woman he doesn’t know on a daily basis because he is in “love” with her – there are moments where the film hits amazing highs in relation to this subplot, but also points where it sinks to distressing lows. With regard to the highs, there’s a breathtaking sequence in a train station which involves masterful choreography and hundreds of extras. More impressive to me, though, is a moment where Parry explains his feelings about the girl in detail, a sad hopefulness in his eyes the entire time. Perhaps the Oscar nomination was made based on that scene alone.

But then there’s an awful dinner scene, where Williams and Plummer take turns playing with their food and generally acting like fools. Is this supposed to be endearing? Jack and his girlfriend Anne (Mercedes Ruehl, who did win an Academy Award for her performance… though I’m not entirely sure why) laugh about it later, citing this as an example of why the two social outcasts are good for each other, but certainly there’s a more graceful way of getting this across than having them throw noodles around a restaurant. Actually, the same sentiment had been expressed in a cleaner manner previously, just by showing the clumsy way that Plummer’s character sticks out from the crowd. We are shown that Parry can empathize with this in the way that he looks at her; anything further is just garbled overkill.

There’s more to the story than this romantic comedy brouhaha, of course. By and large, though, it fails to arouse excitement and relies on brutal simplicity. Parry takes Jack to Central Park at night, dancing around jubilantly and asking his serious friend to lie on the grass and watch the clouds. Because Jack is so uptight, ya get it? He needs to cut loose, relax, stop worrying about the ways in which his life has been hijacked by a stray remark long ago. It’s complex, so let me help you out here: “lying on the grass” is a metaphor for relaxation. It is at this point that the title of the film is explained – not hinted at or briefly referenced, but explained in great detail. Later in the film, we are able to make judgments on how the characters in the film represent the characters in Parry’s spoken allegory thanks to this clunky clarification.

Then there’s a silly action sequence, an unaffecting argument between Jack and his girlfriend, a cheaply sentimental and thoroughly unmoving finale, a painful song and dance number performed by Michael Jeter ( Not the baseball player!) – a great comic actor who is mostly wasted here, later serving as yet another tired thematic device. It’s interesting to note that, again, when the film plays its cards right and lays it on the line with drama, it is sometimes spectacular. Jack holds Jeter’s character in his arms in the hospital, the flamboyant homeless man wistfully noting that he’s watched all of his friends die of AIDS, and it’s a touching scene given even more depth by the fact that it parellels Michelangelo’s famous sculpture of Mary cradling her son. And it’s done without somebody saying aloud, “This is like that Michelangelo sculpture.” Imagine that!

What’s eternally frustrating about The Fisher King is the fact that there are so many ways in which it had the potential to be an extraordinary film. There’s an aching moment near the end of the film where Jack admits his fondness for his unbalanced friend, performed with such passion by Bridges and filmed unerringly – just letting the scene play out without commentary. A flashback from Parry’s point of view is memorable and startlingly vivid. And though I mentioned it previously, I can’t stress enough how perfectly the opening scenes are executed. Sadly, Gilliam had to leave room for zaniness, and it feels totally out of place. Williams’ goofy antics undercut the honesty and left this viewer groaning. It’s a testament to the strength of those scenes which are more contemplative or imaginative that the movie doesn’t fall apart entirely.

2 Responses to “The Fisher King”