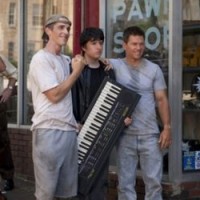 Sometimes you walk into a movie with some expectations about what sort of movie it will be – hell, let’s be honest, that’s most times. And when it comes time for the end of the year, you start hearing about movies that are sure to be up for awards when ceremony time rolls around, and so you begin going to the theater to watch movies, thinking, “This could be the best film of the year.”

It’s hard to shake. When I watched Paper Moon, I was coming off the tail end of the 2007 award-bait season and was still thinking of it as a potential candidate for Oscar nods, despite the fact that it was released decades previously. But I like to think of myself as more objective than that, even if it’s pretty obvious that I am not. Thus, while watching a lot of The Fighter and being mostly uninvolved with it, I couldn’t help but imagining the exact opposite of what I usually get caught on. “What if this wasn’t being talked about?” More specifically, I imagined myself seeing this film at a film festival – the festivals of my imagination where there are multiple films playing at any given moment and one might choose to walk out of a film if it didn’t capture one’s attention fast enough, because a masterpiece might be playing in the theater next door. Would I stay for this movie?

For a lot of the movie, my answer would have been no. Of course, there is the immediate draw of Christian Bale, who is putting more effort into his role than he has in quite some time. It helps me remember why I once thought of him as one of my favorite actors – he really commits himself to the character. Bale plays the drug-addled brother of “main character” Micky Ward (Wahlberg). Bale’s character Dicky is a washed-up boxer who nevertheless retains aspirations of making a come-back, although that’s hard to do when the majority of your time is spent hanging out in crack houses re-living your glory days. He’s an outsized character, flamboyant and ego-driven and temperamental and twitchy. My love for Nicolas Cage is well-documented, but he would never have been able to bring the same thing to this character that Bale does. Where Cage makes his characters something to see, Bale has the capacity to make his characters something to watch.

Dicky over-shadows Micky for the majority of the film, despite the fact that Micky is ostensibly the main character. We’re supposed to be watching his slow rise in the boxing world, which is being sabotaged by his clingy family almost constantly. There’s a great moment where Micky explodes, “Isn’t this supposed to be MY fight?” That could almost summarize the movie up to that point. Wahlberg is great, but he fades into the background when Bale is on-screen. As the film progressed, I began to realize that that was sort of the point. Although the movie centers on Micky’s career, it’s really more about Dicky.

I was really sold in the last quarter of the film or so. Much like this year’s Shutter Island, the movie was riding the fence for most of its runtime and could have either pulled it off extraordinarily in the end or failed miserably. It was based on a single sentence in Scorsese’s film that I found the earlier film successful. If that’s enough for me to have awarded Shutter Island four stars, then David O. Russell’s film easily clears that hurdle. The finale justifies everything that came before, in that it makes it make sense. It helped me to understand why Dicky deserves to be center-stage, and why the fact that he was does not necessarily mean that Micky was relegated to playing second-fiddle. They were both key characters all along.

Which is not to say that there weren’t things to enjoy before those final moments, because there were. The broken dynamics of the Ward family are entertaining and frustrating. They’re played a little too broadly at times, such as when Micky is asked why he agreed to a fight with a much larger opponent. “Everybody said I could do it,” he reasons, “My mom.. my brother.” OMG, he bases his decisions on how his family feels about it! Was that kind of line really necessary? There are a few more moments like this; they’re not often, but they do stick out painfully.

Still, I feel that overall, The Fighter really works. I probably wouldn’t put it on my year-end best-of list, but it’s a warm and engaging film that’s worth seeing if only for Christian’s very enjoy-a-bale performance. I liked this movie.