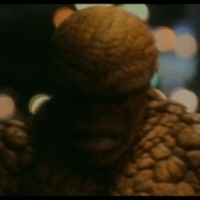 The stuff of legends, the unreleased 1994 version of The Fantastic Four, commissioned by Roger Corman in an attempt to save the rights to the title. Depending on who you trust, it was either heavily promoted and then quietly forgotten when the finished product was complete, or it was never intended to be released yet completed on a $2 million budget in order to meet the bizarre requirements of the legal agreement. The actors, of course, were unaware of what was to become of the film either way. And what did become of it? It captured the minds of comic book fans, lovers of bad cinema, and curiosity seekers. Was the film so bad that it had to be locked away like a super-hero Quasimodo, kept from public view for fear of frightening the those with weak hearts? Unfortunately, many felt doomed to a life wherein they might never know the answer to these deeply troubling questions. But then, a savior arose from the mist: YouTube.

So now that the enigma has been freed from its slumber after 10,000 years, what of it? Well, as you might imagine, it’s not a very good film. Part of that could be due to the low budget, which constrained the filmmakers to special effects such as a wiry arm on a string to represent the super-stretch powers of Mr. Fantastic. But the majority of it is due to an inept script that meanders about for what seems like eternity before throwing the group into a final battle that allows them utilize their new-found skills for once. Before that, though, there’s a prologue that has college brainiac Reed Richards and his best friend Victor Von, um, Doom trying to intercept the energy from a massive meteor as an after-school experiment. They succeed beyond their wildest expectations, insomuch as Von Doom is burnt to a crisp and taken away on a gurney by some suspicious hospital staff who have pronounced the student DOA. The ‘D’ stands for Doom.

If you are familiar with the Fantastic Four, or aren’t totally oblivious to easy-to-follow narrative threads, you should not be surprised that Victor morphs into Richards’ arch-nemesis, Dr. Doom. The bad doctor explains that his goal is to destroy Richards as a form of revenge, although I was never clear on what exactly he wants revenge for. For being a good friend and trusted confidante? For mourning his best friend’s death and seeking to finish the work that the two had started so that the death would not be in vain? That bastard! Speaking of which, the production values constantly reminded me of that ’80s horror gem Pieces. Though there are certainly glaring things to make fun of in Fantastic Four (many note the scene where we see a P.O.V. shot from a blind woman’s perspective), I might have felt more sympathy toward it due to my somewhat conscious comparison between the two films. Corman’s Folly (as it shall henceforth be named) is a slight and silly movie, but overall it’s just fun.

This is clearly no Dark Knight – there’s nothing dark about it. When a Penguin-like troll called the Jeweller kidnaps the blind Alicia to be his sewer queen, then instructs his minions to take the tied up girl to his room so that he can have a “private, uh, consultation” with her, it’s easy to think the worst. But then when the scene returns, he’s simply begging her to marry him and be his queen instead of… well, you know. Though the bad guys carry guns, the bullets don’t cause any real harm. In fact, when one of the nameless goons gets hit by a barrage of friendly fire, he shimmies and shakes like a cartoon character before falling to the ground. This is not a movie which takes things too seriously. The Thing snarls at a group of thugs that he is preparing to clobber, the image spins around rapidly, and the bad guys are strewn across a table while our orange-rock star smugly surveys the damage he inflicted off-screen. Without having had any previous experience, the Invisible Woman and the Human Torch both use their powers to an advanced degree… and nobody comments upon it. The Human Torch, in particular, realizes that he has the power to fly and to leave the Earth’s atmosphere unharmed, but it’s no biggie.

As I mentioned previously, there’s a lot to laugh about here. But what I think is the movie’s real weakness – more than the lack of chemistry between the actors, the over-acting of the secondary characters, the bottom-of-the-barrel special effects, the jerking camerawork of cinematographer Mark Parry under the direction of Oley Sassone, the groan-worthy catchphrases, or the goofy score by David and Eric Wurst (which, actually, is mostly endearing) – more than any of that, the true over-riding weakness of The Fantastic Four is in its script – that’s where it is, oh yeah. There is a character in this movie who is a blind sculptor, who makes statues by touching her subjects’ faces. Yep. There’s a strange “I’ll be back” ending once Doom is destroyed, but it makes no sense whatsoever. Richards has an epiphany on why the group have all been granted different powers, attributing it to apparently deeply embedded character traits that have heretofore not been seen. Johnny Storm has a terrible temper? Until then, he’s seemed more like the Michelangelo of the group, the party dude. It’s a script that doesn’t know its characters, that doesn’t know what it’s doing even. Dr. Doom is going to destroy New York, for what? Does he have any demands? Is it pure malice, and if so where does it come from? I also love the way that a television or a giant screen can appear out of nowhere with little or no explanation if it helps to move the story forward somehow. I love the way that the Fantastic Four, once united, inexplicably have a jet plane that they can use to fly out of the roof of a skyscraper (like the X-Men!), in order to get to Dr. Doom’s volcano lair… which is a few blocks away from the heart of New York City. Okay, not all of this is the script itself. I guess it really does all work together to make for something astounding.