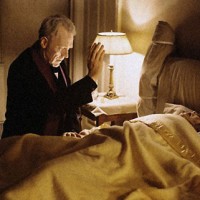 It was only recently that I viewed Fritz Lang’s 1931 thriller M, a film whose novelty has worn off to some degree due to its age, and I think it provides a great lead-in to a discussion of William Friedkin’s 1973 horror classic The Exorcist. The story of a girl who becomes mysteriously possessed by a malevolent spirit, it’s a film which often tops critic lists of the scariest horror films ever made. Without having lived during that time, it’s difficult to think about the film in the context of its release date. If it’s one of the first movies to have sound, it’s a little bit easier to imagine the great strides taken in moving from silence. Much harder is trying to conceptualize the state of special effects in the early ’70s. The film relies almost exclusively on make-up and funny voices to provide the horror, a standard which fails to deliver the same chills today. “This movie doesn’t rest on the screen,” Roger Ebert wrote on the film’s original release, “It’s a frontal assault.” I feel as though we must have seen two totally different movies. Can time alone really be to blame?

We are introduced to Father Damian Karras (Jason Miller), a psychiatrist and priest who is losing his faith. In an early vision of the film’s awful editing, Karras arrives home with his mother, talks to her, walks out while she is asleep, then finds her in the hospital dying all in the space of minutes. His guilt over having not taken better care of his mother makes him a more human character, his faltering faith another relatable trait – who hasn’t felt the courage of their convictions waning? Most synopses of the film, though, will tell you that despite the title, the movie is about a twelve-year old girl named Regan who loves horses and inexplicably begins having violent seizures and horrible mood swings. The medical establishment is at a loss when it comes to curing her because she has been possessed by Satan himself (or possibly a lesser demon with an ego). So Damian and Regan meet cute when the girl’s mother, in a last ditch attempt at curing her daughter’s deteriorating condition, summons the strong arm of the Catholic church to try a good old-fashioned exorcism.

Am I unfairly dismissing a large portion of the film, that which comes before Karras and Regan get down to business? There are many other characters who are introduced, including a detective whose role is incidental and a film director who dies a gruesome, unnecessary, totally off-screen death that apparently took place at Regan’s house. The particulars here are murky, as is the discussion of doctors having given Regan an early diagnosis despite no such thing having been shown or alluded to prior. The year 2000 re-release inserted an earlier scene with doctors to clean that bit up, though these lapses in narrative control coupled with the film’s general chaotic splicing of half-scenes leaves me wondering how this movie was nominated for an Academy Award for Best Editing. In any case, Karras isn’t fleshed out in the first half of the film beyond his relationship with his mother and his faith, Regan is introduced as a happy child before time is spent trying to find out what her problem is, and an older priest named Father Merrin is introduced in ten minutes of unrelated opening scenes.

But none of that is the horror movie part of the movie, anyway. I’ll admit that there are a number of well-staged shots, most famously the iconic image of Merrin first arriving at the house of Regan and her mother. This shot, by the way, cuts away half a second after being set up. Allegedly, the shot was intended to recreate a painting by René Magritte, but this is hard to believe given how the film rushes past it.

To get back on track, though, the horror aspect is where the heart of the film lies. The movie gets its shocks in the laziest way: a little girl who swears. Perhaps this was shocking in 1973, but by today’s standards it’s the equivalent of a fart joke. There are other moments, like the controversial crucifix scene, which still manage to raise the eyebrow of this desensitized child of the aughts, but they are few and far betw– actually, that might be the only one. Aside from this, the possession is all talk and make-up. Ooh, the demon can mimic voices… how scary? Oh, the demon levitates… I’m shaking in my shoes. Were scenes like the room getting cold really taken as frightening when the movie was released? Am I missing something?

I must be. The movie wants to eat its cake and shove your face in it, too. It wants to give its characters identities, but then does nothing with them. Regan’s mother is an actress. Why? What purpose does this knowledge serve in the film as a whole? It wants to have broad special effects, but doesn’t know how to use them. Instead of culminating in a surprising and messy exorcism, it draws the deed out and makes devil-Regan the star, in effect neutralizing whatever power she may have originally held. Imagine if Jaws had not waited to show the shark until the end, but instead allowed it to crack jokes and remain on-screen throughout almost the entirety of the film. The shark would have lost its ability to shock. But then, Jaws didn’t come out until two years later, so how could they have known?

Still, this movie would have benefited greatly from keeping the terror behind closed doors. It’s worth mentioning that the most tense moment in the film comes not when devil-Regan is around, but instead when her mother climbs a ladder into the attic with only a flickering candle to light the way. Less is more in horror. And keeping the demon contained would have allowed for a greater focus on the human story because Karras, who is the main character, would have remained the central character. In keeping with the cake metaphor, watching The Exorcist is like all the guests at your birthday party yelling “Surprise!” while you’re blowing out the candles. It’s not a surprise, you’re already at the party. All they’ve done is cause you to forget to make a wish.