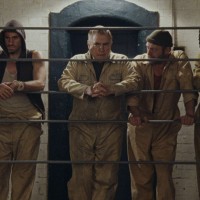 The glowing reviews of director Rupert Wyatt’s The Escapist that you will see all share a similar idea at their heart. This is a movie which breaks all the rules of the prison-break genre. Avi Offer, of NYC Movie Guru, says the movie “brilliantly reinvigorates the genre of prison escape thrillers.” Our definitions of ‘reinvigorate’ must not be the same, because the movie that I saw was far from reinvigorating, and for that matter, not even invigorating a first time. I wanted to like the film, but there’s a shocking lack of tension in the escape sequence – which lasts the length of the movie – and though the sadistic baddies lived up to their description (both sadistic and bad), they too lacked the panache which makes the best villains truly despicable.

In a simultaneous plot, we follow Frank Perry (Brian Cox) as he leads a group of convicts through the sewer system under the penitentiary he’s been locked in for years and we also see the events which lead him to the revelation that escape is the only option. In some ways, this actually does work. Though Wyatt’s directing is often listless, there are some magnificent cuts between the present and the past, such as an early shot where our hero jumps down a shaft to catch up with his comrades and the image abruptly shifts to dirty laundry falling into a hamper that Perry is pushing, several days now in the past. We are introduced to the characters through the addition of a new inmate sharing Perry’s cell (Dominic Cooper), introduced to the characters but not their character. Aside from Perry himself, the only other character who is given any depth is his friend Brodie, another older convict who has formed a fraternal bond with our hero. When Perry begins asking questions about the structural integrity of an air vent in the laundry room, it’s clear what his intentions are. After initially trying to dissuade his friend from his plan, Brodie eventually offers, “I can’t go with you.” Of course, Perry never asks Brodie to accompany him on the journey, but it’s understood that one will not go without the other.

Cut back to the escape, where the band of men run wildly through darkened tunnels, chipping away at walls and stumbling along abandoned subway tracks to get away. They run in silence, save for a few under-the-breath expletives. Is there something in this escape which is unique to the genre? When they settle too long, we begin to see flashlights in the distance, footsteps echoing off of the concrete walls, voices shouting, “This way!” So they aren’t able to stop for long, knowing that it’s imperative to stay a step ahead of their pursuers, lest they risk being put away forever in that awful prison. Let me repeat: is there something in this that is somehow original? Granted, I’m not exactly an authoritah when it comes to the prison-break genre. For instance, I didn’t know that we were calling it a genre now (off-topic, but is the “body switch” a genre of its own, too?). Regardless, I am blanking on what sets this apart from any other similar title.

Well, maybe it’s not in the actual escape that the movie shows its true colors. Perhaps its in what comes before, in the politics of prison, where everybody is sure to be mindful of the block’s tough-guy, Tony. But they only fear Tony because they fear his brother Rizza (Damian Lewis), although the reasons that he is fearsome are not quite explained. He runs the prison, it seems, simply because he’s the sort of unemotional bad guy who can stare you in the face and smile while he orders his goons to beat you down. Again, though, the movie suffers because it can’t quite sell Rizza as a monster even as it shows him ordering a man to mutilate himself in order to avoid further recrimination. Compared to, say, Christoph Waltz in Inglourious Basterds, Lewis fails to deliver the same level of intensity behind those cold eyes. It’s somewhat difficult to put into words, really, except that, okay, we get it, he’s evil. But he’s evil because we see him doing evil things, not because he exudes the air of menace that the character ought to. Perhaps it’s not fair to place the blame entirely on Lewis’ shoulders here. I’m certain that the film was operating on a fairly small budget (funded largely through the Irish National Lottery) and therefore was unable to dive head-first into the grimier aspects of its seedy characters. So a lot is done off-screen, a lot is done with intimation and suggestion. The most frightening moment in the movie comes when Tony tracks a victim into the shower room, steam rising up to cover the scene. Perhaps these limits are what in turn limit the ability of the actor to sell the horror of the character?

In the lead role, Brian Cox is of course a great choice (the role was written for him – literally). In smaller scenes, such as the conversation he has with Brodie which ignites the escape plan, or in a spectacular centerpiece that has him setting up the plan with two other inmates over a game of dominoes – another excellent scene on the basis of the editing, by the way – these are times when Cox really shines. In the more out-and-out action scenes, the ones which find the characters rushing through tunnels, he fades into the background. Or not the background, necessarily, but the fact that he is Brian Cox does not bring much more to the character in these moments than almost any other actor could. What I’m getting at here, it seems, is that above all else the actual prison break itself did very little for me; a real shame given that the escape makes up almost half of the film.

But more disappointing than the uneventful escape is the awful twist ending. If the positive reviews of the movie are finding something to admire in the ending, I must respectfully and emphatically disagree. The twist is so cheesy and frustrating, it almost ruins the good graces that whatever there is to enjoy in the rest of the film may have garnered. It tries to save face by turning somehow metaphorical, but it’s only half-hearted. And it’s not enough for the movie to put the twist out there, wipe its hands and be done with it, no, for some reason the thing is stretched out interminably, “explaining” how each moment coincides with the scenes that had come previously as though it were all somehow intricately crafted synchronously. Nope. It’s the kind of twist any hack writer could toss into a film at the last second in an effort to bring some faux-gravitas to the proceedings. It’s a few rungs below “the good guy was the killer the entire time”, in my opinion.

So The Escapist has a few things going for it in snagging Cox for the lead role, some engaging stylistic choices in the editing to help blend the two halves of the story together, and some intrigue in the build-up to the escape attempt, however diluted that might be. But it’s hurt by lacking any real exciting turns, failing to properly sell its conflict, and a tragic twist ending (tragic for the film itself more than the characters). There are bits and pieces of a really great movie here, but those spare parts are overshadowed by those which are instead agonizingly tepid.