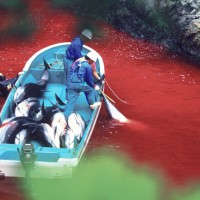 I got into the cosmos pretty recently. I get obsessed with things way too easily, and seeing the “Symphony of Science” series of videos online led me to watching the television show and reading the books by Carl Sagan. He’s a passionate man. He made me feel that same passion toward the cosmos – about the vastness of space, about how amazing it is that we even exist in the gigantic emptiness that is the universe. He made me wonder at the potential for mankind to ever find any other intelligent life somewhere. Because the likelihood is so high that there is intelligent life elsewhere, you know. There are billions and billions of stars out there; it’s inconceivable that we could be the only intelligent creatures in the universe.

Well, we aren’t. “We spend so much money sending messages into space,” one activist says in The Cove, “when there’s intelligent life right here.” Indeed, beneath our seas lie a species that is perhaps more intelligent than we are: the dolphins. Because the filmmakers knew that humans like to anthropomorphize things subconsciously, the first part of the movie is intended to give the dolphin humanity. We hear people talking about spending time in the ocean with dolphins, about how they could feel that the animals were experiencing similar sensations to themselves. Dolphins are self-aware, they are conscious – these are attributes that we tend to attribute to ourselves and not to animals. So the movie begins by trying to make the audience aware that dolphins are just like us.

And then they bring out the big guns. Following a group of environmental activists (“You’re either an activist, or you’re an in-activist”) as they try to get footage from a small Japanese cove, the gut-churning tension is always high. The force with which the fishermen in the area swarm photographers in order to keep them away from the water is incredible. If The Cove weren’t a documentary, it would be hard to believe that a group could so openly be hiding something from the public. I’m sure this sort of thing is actually happening all the time, though, in many areas of the world. In any case, the opposition from the fishermen and the government is showcased as a claustrophobic enemy that these few rebels can hardly hope to overcome… with the troops that they have as of now.

The Cove is not trying to be an objective documentary, nor should it be. One of the filmmakers says early on that they originally asked to be able to interview the fishermen in order to tell both sides of the story. It quickly became clear, however, that the push to hide the issue at hand came from people who knew what the truth was and were readily lying to the public. There is no use feigning objectivity here: Japanese fishermen are committing genocide. The point of this film is to get you the viewer to have that visceral reaction, to get you to see the dolphin as your own mother or father, to understand what is being done to them. And finally, to get you to do something.

One episode of Carl Sagan’s “Cosmos” had him listening to the song of the whales. He considered the whaling trade and referred to the poachers as “murderers”. I found the term amusing at the time, although I did think that I understood what Sagan was talking about. I knew that whales were smart, but I still found it odd that Sagan could talk seriously about carrying on conversations with the animals. Although his passion could convince me that the universe was a place of unimaginable intrigue, he wasn’t able to make me understand our kinship with these sea creatures. The Cove sets out to accomplish what Sagan could not; I doubt anyone could leave unaffected. The fishing business which slaughters the dolphins has the undeniable feel of a Holocaust. Parents are separated from children, forced to watch each other dying. It’s horrific.

The Cove is a profoundly affecting film. That’s exactly what it intends to be, so in that respect it succeeds splendidly. The construction of the documentary is a bit stock – the nostalgic interviews, the dreamy music early on, the cut scenes from television/movies, and so on. Still, the emotional tug that the events create is too strong to fight against with ridiculous criticism about the structure of the film. It does what it needs to, it goes where it needs to in order to get the strongest reaction.

If the point of a film is move you, which it is, then The Cove is a great film.