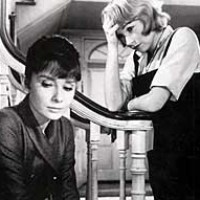 The ever-growing gay pride movement has made the MPAA’s Hays Code (which delineated how the industry should censor itself) look not only antiquated but downright ancient. It’s a wonder that a film like The Children’s Hour was able to be produced during that time, let alone that it dealt with themes of homosexuality in such a realistic manner. Lillian Hellman, who wrote the 1934 stage play which the film is based upon, has stated that the real purpose of the work is to deal directly with the “malice and power of lies”; however, the slow mainstreaming of gay persons has added new depth to an already painful film – it shows the mixed feelings and painful, sometimes self-imposed scorn that can have profoundly debilitating effects on somebody who is still “in the closet”. The power of a lie makes the movie remarkable, but it’s the commitment to the central relationships in the film which make it extraordinary.

I had avoided the film for some time because a snapshot plot synopsis had convinced me that it would be fairly similar to 2008’s Doubt, giving me the feeling that the story had been told and I would gain little from a seeing an earlier version. The Children’s Hour stars Shirley MacLaine and Audrey Hepburn as Martha and Karen, respectively. The two women run a girls’ school together out of a large house and everything seems to be coming together for them, except that Karen will soon be leaving after her marriage to Joe (James Garner). As the two girls have always been there for one another, this news is understandably troubling to Martha. Meanwhile, a bratty student named Mary overhears conversations which, taken out of context, could lead one to believe that… well, we won’t say it directly, but maybe the two teachers are, ahem, better acquainted than one might otherwise imagine? As Mary is not simply mistaken, but also malicious, she informs her grandmother about the issue, which leads to an endless string of tragedy for Martha and Karen. After all, they have to live in a world where the Hays Code is taken as a good idea. You can only imagine what hell they might have to endure if they were outed as lesbians, truth or not.

As the film is based on a stage play, perhaps it’s no surprise that the highest praise I can give starts at the actors. Karen Balkin, the girl who plays Mary, is especially wonderful in her role. I have never seen a child on-screen seem so utterly cruel and remorseless. It is clear that the character is never unaware of the actions she is taking, nor is she blind to the effects that her lies have on those around her. When she is sure that nobody else is available to witness it, she smiles devilishly at her teachers. It’s incredible to watch a child portray a character that is so unlikable in such a convincing manner. Beyond that is MacLaine, who is tortured by the lie much more than her friend, because she finds herself wondering if there may be a hint of truth at its center. Are the accusations correct, or is she being worn down by the jeers of those in the community? Finally, Fay Bainter, the actress who plays Mary’s grandmother – has the most challenging role, erupting in ineffable disgust, remaining resolutely closed to the pleas of the teachers, and ultimately coming to a deeper understanding of the situation. There’s a scene near the end of the film wherein she meets the teachers at their school to discuss the awful things that have happened and yet the two women are unwilling even to give her the time of day. It’s a heartbreaking moment in more ways than one.

If there are a few moments that seem too sudden to believe, they are outweighed almost every time by the scenes with so much more raw power. When Matha, Karen, and Joe confront Mary and her grandmother in their home, the struggle between the opposing factions is extremely tense (and the fact that Joe stands by his friends is enough to pull at the heartstrings on its own). There’s one supremely creepy instance where the two teachers have decided that they must venture outside of the cage they’ve found themselves locked away in, but when they open the door they are confronted with a truckload of men who have parked outside of the house. Do they point? No. Do they yell insults, do they throw tomatoes, do they laugh? No. Instead, more disturbingly, they simply stare.

There aren’t a lot of ways that the movie can end, unfortunately, so if the climax seems somewhat cheesy that’s because it kind of is. But the lead-in to it is fantastic, as Hepburn waits with a smile against a wall in a long-shot at the front of the house… and the mood slowly changes as she begins to have second thoughts and a sharp panic. It would be easy to say that not a lot actually happens in the movie, and being that it was adapted from a stage play, the charge would be hard to refute. But what the movie may lack in action, it makes up for in forging a magnificent picture of the interaction between human beings – man vs. man, man vs. himself. Or rather, woman vs. herself.

The Children’s Hour a powerful film not only for its honest portrayal of lesbianism in a backward and bigoted world, but more broadly, because of its keen eye toward the way that human beings communicate and relate toward one another. There are so few movies that can do even that, though it sounds so simple. To provide realism in character interactions, memorable scenes, and great acting to boot… that’s nothing short of outstanding. I am so glad that I was able to view this film.

One Response to “The Children’s Hour”