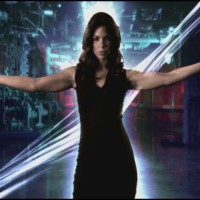 It really shouldn’t come as a surprise that The Cell 2, the direct-to-DVD, in-name-only sequel to Tarsem Singh’s masterful original film does not live up to its predecessor. The Cell was an expertly crafted thrill ride brimming with stunningly beautiful images and challenging camera tricks that remain engaging after multiple viewings. The sequel is, unfortunately, a pretty rote low-budget failure. Were you expecting anything else? All this is to say that although this movie is titled The Cell 2, and I admit that that is the primary reason that I deigned watch it in the first place (that’s kinda why they called it that, no?), I’m not going to bother comparing the two films. This movie is clearly on another plane entirely.

So I’m going to judge it for what it is. And what is it? It’s a low-budget torture thriller with bad actors playing boring roles. It’s difficult to tell whether the movie was truly intended as a sequel to Tarsem’s film, as the plot is vaguely similar. Maya works with the FBI, helping them to track down a serial killer known as “The Cusp” who holds women hostage, sadistically stopping their hearts and re-starting them again and again before finally killing them once and for all. Maya is the only victim of The Cusp who has survived, and her repeated ‘deaths’ have given her this unique psychic ability – she can enter the killer’s memories, which are envisioned like a well-lit hallway filled with flat-screen televisions playing out previous scenes. This is, of course, nowhere near as spectacular as the creepy visions of Tarsem’s film, and the frightening pathos of that movie’s killer is exchanged here for bland platitudes like, “The killer is afraid of the dark!”

But again, given what the movie is working with, these visual representations of the killer’s memories aren’t entirely without merit. I can’t forgive the dullness of the killer – trust me, you’ll know who it is almost from the beginning of the movie – and the totally awful acting from every major character is particularly grating, but The Cell 2 isn’t all bad. As the stakes get ramped up later in the film, the inside-the-killer’s-mind aspect of the plot becomes more central and the movie does employ some pretty interesting effects. I am thinking mainly of one scene where the set seems to ripple around our primary actress – it was pretty interesting. Furthermore, there is a car chase sequence which is especially impressive given the home-video looking film style. Where most actioners throw in a generic car chase and it looks flashy and typical, it’s clear that these are actual vehicles being driven by regular people. It gives the scene a little more weight, seeing a realistic chase sequence where the cars slide and skid and could very well hit a concrete barrier or roll on film. Would they edit it out? I am thinking now of Attack of the Killer Tomatoes, a movie which left an actual helicopter crash in the final film. I sort of get the feeling that this film wouldn’t be above doing the same thing.

I am not saying that The Cell 2 is good. Far from it. The macho back-and-forth between the male police officers is painfully false. The alleged brilliance of the killer is impossible to believe. Maya’s usefulness seems limited to driving the characters to new locales. Oh, and there’s a weird soft-core sex scene interjected into the beginning of the film… a film about a man who tortures women by essentially killing and re-killing them. I get that the movie isn’t really taking the gravity of this situation with any sort of seriousness, but doesn’t a pointless scene of a topless woman grinding on top of some random dude seem.. I don’t know.. tasteless?

But still, come on, as bad movies go, there’s easily a lot worse than this. Compared to American Psycho 2, this movie is gold. At least there are a few bright things to point to in the midst of all the lameness. It’s nice to be able to find something to respect, at least a little. So yeah, it’s a bad movie. But it’s just a bad movie, not a horrible one.