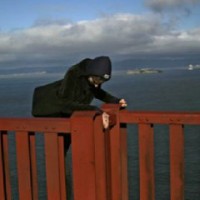 Allegedly, director Eric Steel got permission to film near the Golden Gate Bridge for a year by telling the Bridge committee that “he intended ‘to capture the powerful, spectacular intersection of monument and nature that takes place every day'” at the monument. What he instead did is film 23 of the 24 people who committed suicide by way of jumping from the bridge that year.

Many of those deaths are actually shown in the documentary, following the deceased as they stand on the edge, climb the railing, and throw themselves off the side. The camera follows them as they plummet and hit the water. This is indeed disturbing footage, even without the obligatory “eerie” music score accompanying the scenes. What is even more gut-wrenching than the actual suicide attempts, though, is the way we watch those men and women as they pace back and forth on the bridge, putting their hands on the railing and momentarily pulling themselves up before changing their minds. There are a few who do it quick, like ripping off a bandage, but it seems the majority of them have to convince themselves… it’s the waiting, the knowing that something is going to happen soon, that is what is the most memorable thing.

So people commit suicide by jumping off of the Golden Gate Bridge. Okay. What does the movie want to say about this, other than the obvious assertion that suicide is bad and these people needed more help than they got? Well, that’s not clear. It’s not difficult to see why the movie has been labeled by many critics as just an exploitative snuff film. Despite interviewing the families of many of the victims(?), IMDB Trivia says that he did not let any of the family members know during filming that he actually had footage of their loved ones’ deaths.

The interesting question of The Bridge isn’t about the people featured at all. Steel in fact does a pretty lousy job of individualizing them, of giving any indication that they were any more than malfunctioning machines. They all seem to share common attributes: introversion, a strong desire to be needed, using the internet as an escape, self-loathing. We see this collection of symptoms, not the actual people. We remember Gene because he is shown most prominently, with his long hair and black wardrobe. But what of the others? They are filmed from so far away that their faces are not visible, only their bodies as they climb over and fall away. We meet their families, but they all have the same thing to say. What can you do?

Eric Steel could have done something. The intriguing question of The Bridge isn’t about the people who jumped, but about the filmmaker who watched. It’s an ethical dilemma- is one obligated to prevent a suicide? Is it immoral to film these people taking their lives and do nothing about it? Which is the greater lapse in morality: watching, or not intervening? Or is the greatest sin here in not having anything meaningful to say about it? Could Steel’s footage be seen as noble if he had made a better film?

A man is interviewed who prevented a woman from jumping (Steel caught the entire event on camera). The man posits that if the woman had really wanted to kill herself, she would have done it immediately. He thinks that what she really wanted is for somebody to notice, to do something… which he did. Think back now to all of the people who pace on the edge of the bridge. Why do they choose to kill themselves in such a public fashion anyway? Is it merely about being noticed, about hoping that somebody will see their anguish and care about them? If so, could Steel have done more to help these people? But then, is it his place?

The Bridge is an interesting documentary, but it is not very well made. It really does not seem to have much purpose beyond showing images of people in their final moments of life. I am reminded slightly of Russian Ark, a film that was shot in one continuous take. That movie was worth watching, only so that you could say that you had seen it and be able to talk about it with your film-savvy friends. Likewise, there’s not much to The Bridge beyond the conversations you can have with your friends afterward about Eric Steel’s ethics.

That’s it. It’s a conversation-starter. Not much more.