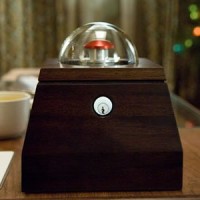 I like this quote from the A.V. Club’s review of The Box quite a bit: “[Director Richard Kelly] is supremely in control of what happens inside his Kubrickian frames, but his ability to control the story that contains them remains questionable.”

Kelly’s third feature is a mess. I recently saw R. Kelly’s masterpiece Trapped in the Closet and one of the hilarious things about that video was that every chapter closed with a cliffhanger, adding more and more tension and creating more and more questions without actually answering much. Similarly, The Box builds toward something… but never quite gets there.

It’s about a couple (Diaz/Marsden) who receive a package from a mysterious stranger. Inside the package is a box with a single red button on the top. If they push the button, they are told, then somebody somewhere in the world who they do not know will die… but they will also receive $1,000,000 in cash. If they don’t push the button, nothing happens. The offer is withdrawn and everybody forgets about it. If this all sounds a bit like an episode of “The Twilight Zone”, that’s because it is. But in stretching the story out to feature length, Kelly has the unfortunate role of devising elaborate reasons for the existence of the box, for the offer, and so on. His monster gets loose from his control and starts roaming the city.

I wasn’t expecting much from the film, mostly because I was under the impression that I knew the twist. Well, I’d read up on the original story and on the “Twilight Zone” episode before going into this. Given the similarities, it wasn’t unfair of me to expect a similar ending, was it? So when the movie took the plot in a different direction than I was expecting, I admit that it intrigued me. I was still annoyed by how easily Arthur and Norma Lewis accepted the offer. Their belief that it was genuine rested almost solely on Diaz’s character saying that the man who proposed the game sounded as though he was sincere.
There are other things about the situation which bothered me, as well. I understand that it’s a movie, but I’m not sure Lewises were thinking this through very well. If they received $1,000,000 from a complete stranger, wouldn’t their friends and family become suspicious? Will the money be taxed? Where did the money come from? These are all important considerations. Even though some of those reservations were never addressed, other intriguing concerns were brought up – ideas that never would have occurred to me. What does it really mean to know some one, for instance?

I don’t think that I’m spoiling anything when I tell you that, yes, the button does eventually get pressed. But instead of the dramatic dread that I expected to play on the characters’ psyches, this is when Kelly really takes over. Things start to get weird. The plot is picking up speed, rolling along and gathering up pieces as it goes along, growing bigger and bigger and harder and harder to comprehend. Maybe the box is an alien technology? Or maybe it’s a test from God? The devil? Maybe all of existence was just a game all along? Kelly tries to lay it down for us in clues, but they don’t really do anything to help it make sense. There’s a book about lightning that gets mentioned, and a swimming pool at a motel. I have little more knowledge about how these things are important than you do having not yet seen the film.

There’s an attempt, late in the game, at some philosophical message about altruism; but again, this is poorly managed. Are we supposed to condemn the Lewises for their choice, because they chose money (after each of them had been struck financially) over the life of a stranger? Is it fair to judge them based on a decision that was made in less than 24 hours, made in response to an offer that could very well have been fraudulent in the first place? Would we consider them to have a greater sense of morality if they had refused to press the button? No, of course not. They would have made that decision out of ignorant fear, not out of a moral courage.
Buttons have to be pressed.

So. I started out not expecting to like The Box, but its mounting thrills and peculiar questions got the better of me and I started getting into it. Which is a shame, because the movie ends with such an unsatisfying nothingness. So many questions are raised, but none are given even an educated guess. That makes for an overall less than enjoyable experience.

(And I haven’t even mentioned many of the more aesthetic problems I had with the movie… The actors’ annoying, fake Southern accents. The all-too-obvious Sartre references [these are so totally important, guys!!!]. The Arcade Fire’s jangly score [second only to Where the Wild Things Are for creating discord]. And a glaring editing mistake, wherein the audio for one scene plays over the image of the previous scene, making a character seem to be two places at once.)

Even if it is an occasionally interesting film and maybe well-shot, The Box is not really well-made. The story is wrinkled. Three movies in, I’m afraid that Kelly is just running in place.