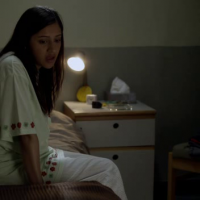 Echoing the winding, self-aware narrative of Charlie Kaufman’s Adaptation and building on the creative license given to documentarians by Errol Morris (particularly with The Thin Blue Line), but otherwise placing its own flag in the sand comes director Clio Barnard’s first full-length film, a fictionalized documentary, of sorts. It takes the audio of interviews with people whose lives are connected to the late playwright Andrea Dunbar, matching them with lip-synching actors. This unique method of filmmaking allows for a surreal atmosphere that’s virtually unheard of in the genre. The “subjects” are able to literally walk through scenes playing out their memories while describing past events, and the camera can draw visual parallels that would be otherwise impossible were we given a simple series of talking heads. Intertwined with the interviews are selected scenes from Dunbar’s play The Arbor, performed on a lawn in the neighborhood in which she grew up, a crowd gathered around in wonder. What’s positioned as a look at the life of Dunbar, however, soon reveals itself to be far more about the effect that her choices had on her three children – or to be more specific, a meditation on how the sins of the father contribute to the sins of his progeny.

Most notable of these is Lorraine (played by Manjinder Virk), Andrea’s first child and a half-Pakistani freak to the racist estate on which she was raised. Lorraine becomes the unofficial main character; though her siblings Lisa and Andrew each have their own memories of what their famous mother was like when alive, none seem to have been affected in the same ways as Lorraine. In a chilling scene early in the film, the actresses playing Lorraine and Lisa recall an incident wherein an accidental fire began to blaze in their bedroom as children. The two women stand staring at the camera in the middle of the room, a small fire growing on the mattress behind them. Their statements alternate, first Lorraine describing her memory of the event, then Lisa. Lisa speaks with a half-smile, recalling faintly that she as a child may have removed the door handle in juvenile prankishness, which obstructed their escape from the roaring flames. Lorraine’s memory is tinged with greater bitterness: she recalls her mother removing the door handle to lock them in during the night, she sees the room as a prison.

Lisa will have nobody speak ill of her mother, and despite her hard-drinking ways refuses to think of her parent as an alcoholic. Is she hiding behind sugar-coated memories to save herself from becoming a wreck like her sister? Lorraine is almost the exact opposite: her life has been filled with regrets. She has been addicted to drugs most of her life, prostituting herself to earn the money required to fuel her drug addiction, all after suffering ignored sexual abuse as child. She blames the way she turned out on her mother – a mother who said aloud that she loved her other children more. A mother who stated that she wished her Paki daughter had never been born. While washing dishes at her sun-soaked home, Lisa remembers the cold way that her sister rationalized selling her body. Lorraine, for her part, admits that although the job isn’t demanding physically, it can be grueling mentally.

Is the way that Lorraine’s life turned out a response to her mother? Spliced in with the interviews are scenes from the stage version of “The Arbor”, wherein a young girl deals with her abusive parents, drug addiction, and run-ins with the law. This semi-autobiographical work seems to parallel the events of Lorraine’s life with a strange specificity. Is it fair to lay the blame on Andrea, though, given that Lisa and Andrew both appear to have led mostly ordinary lives? The purpose of the film is not to answer this question, but to illuminate the tangle of memories and finger-pointing that have led the group to this point. The actors add depth in the way that they evoke the deeper emotional state of the interview subjects with the carefully selected tics that they employ. Virk stares off into space, only half in the moment; Christine Bottomley as Lisa smiles when she “speaks”, squinting her eyes as if putting great effort into calling up her memories (after all, Andrea Dunbar passed away from a brain hemorrhage when the eldest child was only 11 years old). Most impressive to me, though, were Monica Dolan and Neil Dudgeon portraying Lorraine’s foster parents. When the couple remember a tragic event from later in Lorraine’s life, the actors sell it remarkably well: Dolan convulsing in tears while Dudgeon holds her close in comfort.

But then, the actors are merely interpreting the sounds of the interview subjects. It is the subjects themselves who give the dialogue such poignancy. Ann (Dolan) only off-handedly makes the most cutting analysis of the situation, detailing that there are two options in response to Lorraine’s continuing chaos: either tell her off and forget her completely, or accept the past as unchangeable and wait to see if and how she picks herself up again. These are similar to the options that the children have when thinking of their mother. Lorraine has written her off completely, thinking of her as a monster; Lisa and Andrew are more apt to forgive, to try to see the best in their mother’s decisions in life. It’s not an unusual comparison for me to make, but I see the excellent 7 Up! documentary series as an analogy here – only instead of seeing Andrea’s adult children as they were when they were youngsters and urged to formulate ideas about the influences in their life from that, we see the adult children and their mother (at roughly the same age) in archival footage.

It’s a gripping documentary made with great artistry. The freedom of the conceit allows for the words spoken aloud to touch on a deeper level, and the candid sincerity of the interview subjects makes for an impressively intimate portrait of the disconnect between the family members. At the end, few questions are fully answered and Andrea Dunbar’s life and work are ultimately reduced to catalysts for the future, but the finished work – simultaneously intricately constructed and off-the-cuff, approaching its subject with unconventional technique and from an unusual angle – is a singular experience.