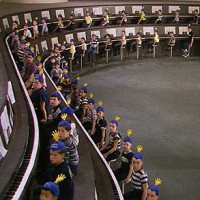 I recently re-watched the Steve Martin classic The Jerk, which may be one of the funniest movies I’ve ever seen. It’s sublime in how bizarre it becomes, delightful for its endless quotability, impressive for the commitment that each of the actors put toward their individual characters. It’s the best comparison I can make when I try to speak about The 5000 Fingers of Dr. T, a 1953 musical written and produced by the legendary Dr. Seuss. Like Martin’s movie, Seuss’ delights in the absurd – both bask in the joy of silliness and fun. Where Martin’s film was off-kilter throughout, 5000 Fingers takes the cake by being live-action but ramping up the cartoonishness incrementally as the movie progresses. It may start with a choreographed number that clearly looks to have been constructed on a soundstage, but it grows increasingly hard to distinguish where the line between reality and the upside-down visions of Dr. Seuss.

In short, it’s kind of a masterpiece.

We are introduced early on to Bartholomew Collins. Bart’s mother has him learning to play the piano under the tutelage of Dr. Terwilliker (Hans Conried, voice of Capt. Hook in Disney’s Peter Pan), in the hopes that it will teach the boy some discipline, as he has been growing up sans father. What Bart’s mother does not realize, though, is that he and the piano instructor are enemies, and when our hero falls asleep at the keys we enter into a fantastic dream world where Dr. T has fine-tuned Bart into the an expert concert pianist, all with the intention of putting him together with five-hundred other boys – the 5000 fingers simultaneously playing the most beautiful song ever written (“Ten Little Fingers”), all so that the world will know the name Dr. Terwilliker, bwahahahahahaha!

So begins Bart’s journey deeper and deeper into this dream world. It becomes easy to forget that the entirety of the movie is taking place inside of Bart’s head, as we are slowly introduced into the world. It slowly becomes ever more weird and ever more realistic in its absurdity. Where the movie begins with large, open spaces (the wrap-around piano, the cavern where the plumber Zabladowski is installing sinks), but soon the over-indulgence of the Dr. Seuss’ world begins to take hold. Suddenly there are signs with hands pointing every which way, loopy staircases that lead nowhere, trays and tables that emerge from the floor – practically anything you can imagine. Many have mentioned it already, but this is likely the only live-action film to accurately capture what it would be like to live in Seuss’ zany world. When Bart sees a concert put on by every instrument in existence that isn’t the piano, it isn’t long before it comes to include all sort of batty contraptions. And, much as in almost all of Seuss’ books, the characters speak about insane objects and activities with a strange matter-of-factness, as though it’s perfectly normal. At one point, the characters announce that the weather outside is “fabulous weather for bipping and beeping, for shnipping and shnapping, snooping and shneeping.” Is it, now?

The adherence to Seuss’ vision is one marvelous thing about the movie, indeed, but lest you think that the movie is meant simply for children, there are too many hilarious moments throughout that only the adults in the audience are bound to find humorous. When Dr. T tells Zabladowski that he is an important cog in his plan, the plumber exclaims in disgust, “I am not a cog! I don’t even like the sound of it. I am an independent contractor.” In another instance, the two meet and get into a battle of magical charms that quickly devolves into a kind of dance with one fighting in fluid, balletic movements with the other. When it is over, the two men are gasping for breath from exhaustion. “Where did you study?” Terwilliker asks. “I just picked it up,” Zabladowski responds. A very similar joke was used in the Will Ferrell comedy The Other Guys just last year. My temptation is to simply recount all of the various moments throughout the film that had me cracking up, but the adherence to Seuss’ vision and the mature level of humor are not the only things that make the movie great.

The acting, by the three principles especially, is something extraordinary. Unfortunately, Mary Healy, who plays Bart’s mother, is not given a lot to do in the film except appear alternately hypnotized or frightened. So the main players end up being Conried, Peter Lind Hayes as Zabladowski, and Tommy Rettig as the young Bart. Let’s start with Rettig, who seamlessly acts both childlike and adult, interacting with his co-stars as their equal while being also being able to suddenly decide that he is rowing an imaginary boat. When he first interacts with the audience, Barts speaks with the tone of an adult (“So that’s my problem…”), but then later takes his mother literally when she suggests that he should might have to practice playing the piano forever. Hayes is incredible, too. The imaginary boat scene from before is a great moment to point for to illustrate the skill of this performer. He begins by scowling at Bart’s foolishness, but it’s not long before he’s sitting in the boat with him, putting all of his effort into keeping an imaginary fish on his imaginary hook before the beast can swim away… in his imagination. And then there’s Conried. This man is known mostly for his voice work, but his presence here is something to behold. He’s like a true cartoon come to life, scrunching up his face into weird expressions, changing his voice in all sorts of odd ways, and looming over everybody in a menacing way – not to mention the fact that he has some of the best lines in the movie. Or maybe he just makes them the best lines by delivering his dialogue in such a kooky way. And the whole cast shines in the dance numbers, which reminds me…

What makes The 5000 Fingers of Dr. T spectacular is not simply its adherence to Seuss’ vision, the slyly mature humor, or the skill and commitment of the actors at the center of it. The movie is enhanced dramatically by its use of music. There are a number of musical numbers, wherein the cast break suddenly into song. It usually comes without warning, but the tunes are endlessly catchy, without fail. The “Dungeon Elevator” song is one particular stand-out, but I’m sure I’ll be humming “Ten Little Fingers” in my head for the next week. This is not to mention Hayes’ sentimental “Dream Stuff” or Rettig’s strange, mournful “Little Kids”. These are all great songs, but it’s not just the out-and-out musical numbers that work to the film’s favor. The score for the entire movie is suitably twisted and yet light. When Bart initially falls alseep at the piano, the fading sound of his fingers playing on the keys makes for a Twilight Zone-like accompaniment to his descent. Then, when Bart shows of his new-found virtuosity in his dream, the moment works not only as a wry joke – it’s also powerful and beautiful.

But in the end, the reason that I loved The 5000 Fingers of Dr. T is not because of the film’s faithfulness to the mind of Dr. Seuss, nor its occasionally sophisticated humor, nor the terrific performances by all of the actors involved, nor even the bewitching musical pageant. No, the one thing that made this movie so spellbinding for me is the way that these things all work together, all add up to make a film that is ultimately unlike any other. There are comparisons I can make, sure, but the movie is quite simply one that has to be seen.