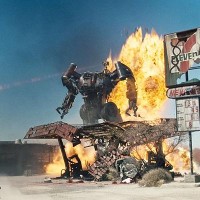 I didn’t read any reviews of Terminator: Salvation before going to see it, which may have led to my general acceptance of the terms it was playing on. I didn’t have any fore-knowledge regarding what aspects of the film were weaker than others, so I wasn’t able to hone in on the movie’s flaws and keep my eye on them throughout the runtime.
So I liked the movie.

Which is not to say that it’s perfect, and certainly not anywhere near the original Terminator or even its stellar sequel, T2. Oh yes, the movie is a great deal more about providing stunning action sequences than building a coherent story. Sorry to give it away, but that is the reason that the critics are coming down so hard on T4. It seems that the purpose of this movie isn’t to draw the story into a new direction, really, so much as to fill in the gaps. Not even gaps, so much as just backstory (in the future!) that has yet to be mined for money-making purposes, molded into a feature-length film.

The movie opens on shaky ground. Marcus Wright (Sam Worthington) is a cold-blooded killer, sentenced to death in Texas – surprise, surprise! – in 2003, just before the events in T3 transpired. Only, like most people who kill both police officers and innocents with a gleeful malice, Marcus has an inherent moral code and knows that he deserves to die. A woman from Cyberdyne (do you remember??? from the other movies???) convinces him to donate his body to mad science after being executed, in exchange for a conjugal visit, which, for some reason, the filmmakers chose to show in graphic detail.

Now we cut to the near future, 2018, after the “Judgement Day” that you already saw in T2, so there’s no point in showing you again. Let this scrolling text at the beginning of the film serve as a quick synopsis: we’re in a post-apocalypse, there are roving pockets of resistance around the world – humans fighting their machine overlords, and because of his initials John Connor is being shoe-horned into some kind of Jesus role (some people think he’s the savior, others think he is, quote, “a false prophet”). The similarities between Connor and Jesus are innumerable: both had to send their father back through time in order to have sex with their mother so that they could be born in the first place, both lead a band of rebels in a fight against sentient machines, both have mothers who were thrown into a mental asylum because of their delusions about killer robots, and so on.

John Connor is searching for Kyle Reese, who, if you have seen the first Terminator recently enough to recall, was sent back in time by John Connor in order to have sex with John Connor’s mother (what an awesome destiny that is), so that John Connor can be born. Meanwhile, Marcus wakes up and is a Terminator. We know this pretty much right off the bat, but for some reason the movie thinks so lowly of us that it has creepy rises in the musical score every time Marcus does something kind of robot-y; for instance, when he gets punched in the jaw and doesn’t even flinch. Marcus, being a very kind-hearted and gentle murderer, hooks up with Kyle Reese and his unexplained mute minority child in L.A. while trying to come to grips with what has happened to him and, I guess, set about atoning for the murders that he committed in his previous life. Which leads him to search out J.C., get it, cause, like, he’s a sinner and needs to repent or something.
Or maybe not. I don’t know.

Look, man. I know this isn’t a very good movie. This isn’t the return to form that we were hoping for, and it certainly isn’t this year’s The Dark Knight. But it takes the reality of the situation more seriously than the previous entry in the series did. Although T3 adhered closely to the thread of the story, it didn’t manage to evoke any sense of dread. It was a given that John and Arnold would live, and every action sequence, no matter how eye-popping, failed to hit home.
Yes, T4 relies on your knowledge of the series so far for most of its story. And yes, when it tries to stand on its own feet it falls flat on its face (Marcus’ entire story is just horrendous). But as action-packed filler, the movie takes the cake. Even at PG-13 levels, when Reese and the other resistance fighters are packed into a smoke-and-flame factory with angry, red-eyed robot guards, it’s frightening. When a gigantic robot attacks a hide-out in the middle of the desert, you are (or I was, anyway) on the edge of your (my) seat. When J.C. and one of his henchmen hide just outside the machines’ evil lair, the tension is high.

So. All in all, yes, the left-wing media cabal is right that the story is given short shrift in exchange for action. But the action is done with more finesse than it was in the previous film (do I credit McG for that?), so that I felt that it mostly worked. And with how gag-worthy the Marcus plot-line was, I’m not sure that a bigger focus on the story would have been beneficial. Here is what needs to happen: the good elements from T3 need to be scraped out of that movie, and the good elements of T4 need to be collected from this movie, and then those two elements combined will be pretty damn amazing.

Terminator: Salvation is good, but not great, for all the exact opposite reasons of its predecessor.