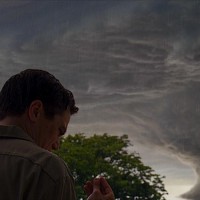 I’ve been looking forward to director Jeff Nichols’ sophomore effort Take Shelter for what seems like ever. After being bowled over by his first full-length, Shotgun Stories, it was clear that this was an artist who had a careful hand on the release valve of tension in a film’s structure, not to mention an eye for a powerful image – exhibited both by the sweeping landscapes of southern Arkansas and by the actors’ powerhouse performances, particularly that of lead Michael Shannon. This follow-up also stars Shannon, this time as a man haunted by dreams of ominous storms. He becomes torn between competing fears: 1) that he’s being consumed by mental illness, and 2) that something supernatural is coming to annihilate his family. From the trailer alone, it’s clear that Take Shelter sets out to up the ante from Nichols’ previous work, and after viewing the film I’d say that in a lot of ways it achieves that. Unlike its predecessor, though, this second film does not build gradually to a subtle crescendo; instead, it lashes out with bolts of sudden intensity.

My initial reaction was to declare that I liked this film less than Shotgun Stories. I suppose that’s still true, since Nichols’ first film excited me in a way that this follow-up couldn’t hope to achieve. But the more I think about the films, the more I realize that though the two may share some characteristics – a measured pace, authentic Southern stylings, the intense performance of Shannon at the center – they are nonetheless discrete entities. Where Nichols’ previous film allows its audience to see the way that its characters live and intuit conclusions about the state of mind of its protagonists, here we are invited into the visions that Curtis LaForche (Shannon) is having. What  might play as mere gimmick in other movies, the shock of waking from an all-too-real nightmare state, here helps the viewer to understand the real terror that the man must contain from his friends and family. Each dream grows more disturbing, beginning with dark storm clouds and reaching a violent fever pitch before he is able to snap himself free. Soon, those visions bleed into the daylight, as Curtis hears thunder when there’s not a cloud in the sky.

The mood is accentuated by a brilliant score, composed of two elements: a persistent, low rumble + a twinkling melody, reminiscent of the sound of windchimes at the start of a gale. It’s a perfect match for the story, allowing some sense of the threat continuously. But overall, the tension doesn’t slowly build in the same manner as Shotgun Stories. It’s true that Curtis’ visions grow increasingly terrifying, but between them the character is a man aware of what may be happening inside of his mind and desperate to keep his family safe while doing what he can to stay with them. So a lot of the film is devoted to the shaky relationship Curtis shares with his wife and daughter, doing what he thinks is the right thing to protect them as he uses up the family’s income to expand their tornado shelter while unwittingly widening the gulf between them. I’ve been watching a lot of the AMC television series “Breaking Bad” lately, making it easy for me to draw a parallel between the two. Just as Walt, the protagonist of the series, must navigate a web of lies while cooking methamphetamine in an effort to provide for his family before succumbing to cancer, so too does Curtis hide his true motives from his family in a misguided attempt at preserving the status quo.

And once again, what sells this slow erosion is the actors. Shannon is matched by Jessica Chastain (Tree of Life, The Help), who play his wife Samantha. Another movie might feature a spouse who doesn’t understand her husband’s actions, decides they are too much to bear, and leaves. Here, though, Samantha is a woman who doesn’t understand her husband’s actions, decides they are too much to bear, and bears them anyway. Why? Because she loves her husband. Because she loves her family just as much as Curtis himself does. The two actors together are a revelation, making many of the stand-out scenes ones in which the two are sharing some personal interaction. Without getting into spoilers, there is a moment where Curtis lashes out belligerently and of course that is a powerful scene; Shannon has already shown his ability to tilt the scale toward the manic in many of his previous roles (Bug and 8 Mile come to mind, for me). Shannon even declares “There’s a storm coming!” during this particular scene, a cliche which usually rankles me, but I found far less egregious here. What really sets the moment apart from its somewhat generic trappings, though, is in Samantha’s response to her husband’s explosive outburst. Does she gasp in horror and turn to flee? No, she embraces him.

It’s in this way that the true meaning of the title comes to the forefront. “Shelter” must not necessarily be a physical location, just as so many other movies have taught us that a coming storm must not necessarily be a literal storm. In this instance, “shelter” for Curtis is the security and love of his family, people who are determined to stick by him and help him weather his own storms. With that said, though, do not make the mistake of thinking that those two words can be simplified in metaphorical terms either (e.g. “storm” is not necessarily short-hand for mental illness any more than it has to indicate a real-life weather phenomenon). There is an abundance of layers of meaning and emotion within the film, all bound by the many spectacular pieces clicking together like clockwork: from the actors’ emphatic performances to the haunting score, from the tasteful special effects to the brooding atmosphere, from the gorgeous landscapes to the sudden shifts in perspective.

I still can’t say that I liked Take Shelter quite as much as I did Shotgun Stories, at least not without another viewing (or two, or three…), but I feel confident saying that both are stunning works of art. You should see this movie.