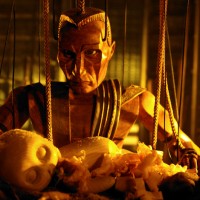 The story of Strings is a bit hackneyed. Perhaps that’s the wrong way to view it. Perhaps I should be calling it a “classic” tale of love, betrayal, et cetera and so on. But when you find yourself mentally comparing the plot to things like Star Wars, The Lion King, and Avatar, it’s hard to think of the elements as genuine but overdone. Instead, it’s easier to think of it as just lame.

Which is not to say that the movie’s plot hinders the film in any way. It is a classic sort of fairy tale story. The Kahro, or King, of the city of Hebalon is sick with disgust for the way that he has run his kingdom. In one last act of repentance/cowardice, he commits suicide – bequeathing the kingdom to his son Hal (McAvoy). Unfortunately, the Kahro’s evil brother Scar.. er, I mean, Nezo, claims control of the kingdom and blames the Kahro’s death on the nomadic tribe of Zeriths, enemies of the kingdom. Hal thus goes out into the world to find the Zeriths and kill their leader Soro.

What follows is not difficult to foresee. Hal has to travel treacherous ways, meets strange characters, and falls in love with a Zerith girl named Zita who is clearly not important in any other way. Clearly not. Meanwhile, back at home, the rest of the royal family has to deal with the evil ruler who has declared a state of emergency in the kingdom. The movie was intended to be a commentary on the infamous “War on Terror”, but maybe the reason that it strikes so close to similar films is that the generic bad force in each of these films is fascism.

So. The story has been done before, so what makes the movie work? Well, how about the fact that all of the characters are played by marionettes. No, it’s not just the marionettes – that’s been done before, and in worse movies (yeah, I’m not afraid to say it: Team America). What makes Strings stand out is the way that it incorporates the fact that the characters are marionettes into its mythology. Each of the characters is keenly aware of their strings, they refer to them often. The worst thing that can happen to a person is that their “head-string” gets cut, effectively a beheading. A glance across the landscape shows endless strings reaching endlessly up into the sky, ending who-knows-where.

The commitment to the marionettes’ universe is astounding, but it is bolstered by the incredible set design that takes the characters’ reality into account. No buildings have ceilings (how could they?), so rain pours in constantly. Where most medieval cities would have a drawbridge or a gate to keep out intruders, all that the city of Hebalon requires is one small bar covering the entrance and nobody can get through. In their jails, instead of cells, there is a horizontal grid – that’s enough to keep the prisoners separated. The sets are lush, dark, and beautiful. And what emotion! It must take years and years of practice in order to get to the point where you can control a marionette so well that its every emotion is plain despite its painted face. The way the characters hold themselves, the way they walk and quiver and stand – so much is communicated in each tiny motion, it’s truly astounding.

Look at this scene of Nezo standing over a victim in front of a large crowd: http://bit.ly/duXvR0 . The endless array of strings gives the movie that darkness, like black rain falling endlessly. Urban Cinephile’s incredible RT blurb to describe the film calls it a “[n]ightmarish adult fantasy set in a shadowy underworld where rain is frequent, court intrigue is rife & marionettes dangle from black wires as if undergoing daily crucifixion.”

All this is to say… Say what you will about the story. It conforms too well to tired plot devices. The pacing can sometimes be abhorrent – often, the camera will linger on one character’s face despite the fact that they lack the ability to move their mouths. Say what you will. But the tone of the film, the atmosphere – it’s informed mightily by this disturbing world that the characters live in, where the fragility of everyone’s life is on display at all times. For whatever flaws Strings may have otherwise, it has a powerful vision which makes it a film absolutely worth seeing.