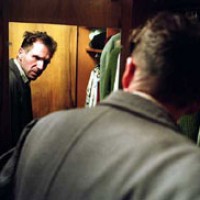 I’ve been avoiding writing this review for a week and a half. I had made it a resolution to myself not to do that sad thing that I used to do back in those bygone early days of my movie criticking. I had vowed never to say those awful words: “I don’t really have anything to say about this movie.” But dammit, Cronenberg, you’ve beaten me down.

Of the films of director David Cronenberg, I have now seen eight. I would consider myself a fan, and so I went into Spider with fairly high expectations. Not to imply that I was let down in any way by the film. It’s a fine movie. It’s almost a one-man show, as Raif Fiennes plays the titular Spider, a man who is beyond repair. He may or may not have witnessed his mother’s brutal murder as a child and that’s done all sorts of messing with his mind. Actually, this is more of a two-man show, as really the only other major player is Miranda Richardson (Rita Skeeter, from the Harry Potter franchise) in a triple-role, and she certainly makes each successive character a bright shade away from the previous one.

Now I will recount the events that take place in the movie. This is a poor stand-in for legitimate criticism, but perhaps it will give some idea of why it has been difficult for me to begin. Spider stumbles around, mumbling. He picks up trash and stores it in his pockets. Occasionally, he walks through the background of childhood memories and watches them unfold. I suppose that these memories are where the atmosphere of the movie, or where the center of the film, lies. However, where they should be creepy (and actually start out that way), it is not long before they get too surreal and silly to be taken seriously. The rest of the “joy” of the film comes in watching a decrepit man be just that. He’s like a child, with a made-up language and a warped sense of reality. Fiennes certainly puts himself into the role, but there’s not really a lot of range from there.

Roger Ebert’s review manages to put into words the effect that the movie has on a viewer. “The movie is well made and acted, but it lacks dimension because it essentially has only one character, and he lacks dimension,” Ebert writes. He continues, “The details of the film and of the performances are meticulously realized; there is a reward in seeing artists working so well. But the story has no entry or exit, and is cold, sad and hopeless.”

Indeed, the arc of the movie seems to be mostly that Spider arrives at a boarding house full of others who are broken down in some way, and then he stays there. No great revelations are found out, since we see Spider’s perspective of everything in his world and he cannot make sense of it all. The movie cannot make sense of it all. There’s a moment where Spider’s mother serves her family a bowl of snakes – the shot lasts only a few seconds, but maybe it illustrates the issue I’m having with the movie. Things are bizarre for Spider, and that’s it. Here’s a bowl of snakes for dinner, that’s it. Thanks? I guess I’ll, I’ll just interpret that as a dream?

Cronenberg is a master of the type of macabre horror that is likely to make you squirm. It’s strange, in a way; I easily fell in love with Videodrome, The Fly, Existenz, and Dead Ringers. But it’s when Cronenberg ventures into more serious, or more straight-forward territory, that it takes a little bit more work on my part to get in the game. Not to say that this movie is straight-forward, as it certainly is not, but at the same time I don’t really feel challenged by it. The film flirts with violence and surrealism but doesn’t have the courage to dive in head-first. So I can say that Fiennes and Richardson were both great, and they were, but what else?

Is it fair to write it off as “lesser Cronenberg” and be done with it? Is there something that I missed? I keep coming back to Ebert’s comment that there is not an entry for the story. I’d so very much like to find some angle to approach the film from, something that can root this review and make it more than just the repetition of the phrase “it’s ok”. But I don’t see the angle, aside from just a general feeling that the movie doesn’t really go anywhere in spite of a coiled backstory that winds around and around on itself. There are some really fantastic moments which work on a scene-by-scene basis, but as a whole the movie feels slight.

Hey, did I mention the performances of Fiennes and Richardson? They were both really good.