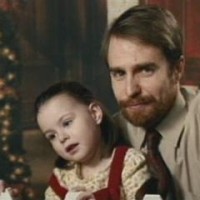 I’ve seen all of director David Gordon Green’s films now, with the exception of Undertow, which I certainly plan on seeing as soon as I can. Knowing the bulk of a filmmaker’s oeuvre often makes one feel as though one knows what the director is about. That’s become a more difficult claim to make now that Green has turned his eye toward James Franco led stoner comedies, but the first half of his career seems focused more toward a smaller scale: personal human stories that exhibit people hanging out together and talking, and, yes, they are almost always punctuated with some large-scale, life-changing event for the characters, something heartbreaking and emotionally shattering. Snow Angels certainly has the human story down, but it can only manage to hold the larger plot by the edges without damaging it.

But first, there is a lot that the movie does right. It’s become the standard praise to heap onto a DGG film, so much that I feel that it makes his work easy to parody, but the cinematography in his films is always extraordinary. Between scenes involving the actors, the movies focuses on trees shuddering in the wind and powdery snow whipping across the plains. It’s beautiful. In addition to this, the film benefits from some amazing actors. Sam Rockwell, in particular, has proven himself time and again in some great movies recently (e.g. Moon, The Assassination of Jesse James…, Conviction). His work continues here as he portrays a broken man who turned first to alcohol, then to Christianity to cure his aching heart. His relationship with his wife is on the skids (more on that in a moment), which has also fractured the relationship he has with his daughter – now couple that with his failures in his career and it’s not hard to see how this man could feel the need to seek shelter in bars and pews. Kate Beckinsale, who plays Rockwell’s wife Annie, is equally astounding as a woman who feels that life has passed her by. She wants desperately to focus on her own needs but has so many people demanding things from her that she feels just as torn as her estranged husband.

This is to say nothing of Michael Angarano and Olivia Thirlby, the two teenagers whose budding romance forms the heart of, and indeed the most endearing portion, of the film. As Arthur and Lila, the two share adorable moments where they simply smile at one another while talking on the bleachers, where one talks affectionately of the other in his or her absence, where they share their fears and frustrations as the other sits silent, listening. While the children are a joy to watch as they awkwardly find the words to say to one another to express their feelings, a movie does not necessarily need to traffic in warmth and smiles to be outstanding.

Which brings me back to Annie and her husband Glenn. Their story is tragic, not simply because of the awful events that befall them over the course of the film, but for where they are right now. Annie is abrasive, easily upset – Glenn is the same in a lot of ways. But Glenn is trying to change himself because he is aware of these flaws, or at least aware of how they have upset his wife. Her continuous, unconditional rejection of Glenn’s attempts at bettering himself only drives him further toward Jesus and the bottle. It’s easy to see Annie as villainous, as many of her choices seem to motivated by being extremely self-centered, and indeed many critics have noted that it’s difficult to feel much sympathy for the character because of it. It’s not hard to see where these critics are coming from, but I think the issue here is not that the movie forgot to make her relatable, but rather that it forgot to explain why we should find her relatable.

The entire point of the movie is summed up in a split-second shot of a picture frame at Annie’s house. The photo shows the couple together as teenagers, smiling and holding each other at their senior prom. Indeed, Annie says that she has not been with a man other than her husband in her entire life. Her decisions are selfish, yes, and perhaps unforgivably so, but they are done because she has felt trapped in the life she’s been leading. That certainly does not make the things that she does into heroic actions, obviously, but they can be reassessed with this understanding as human actions. And that’s exactly what I’ve long seen David Gordon Green’s movies to be focused on, the reality of living in a social network where people can make mistakes and hold grudges and have regrets and learn from the past or choose deliberately not to. Where people are people rather than characters, and the things that are never said are often just as important as the things that are.

However, Snow Angels does not succeed in maintaining that cool representation of the human condition. It gets bogged down in plot details and loses sight of what it had been creating. The movie begins with a gunshot in the distance and feels compelled to work its way back to that driving force. But the gunshot isn’t exciting, what leads up to it is. I make the comparison constantly, but I can’t help but think of Jeff Nichols’ masterful Shotgun Stories (which, incidentally, Green executive produced). There’s violence in that film, yes, but often the strings tighten more with the threat of violence than by actually providing it. In a similar fashion, Snow Angels accomplishes more with the sound of a gunshot than with the shot itself.  Similarly, more is accomplished through the idea of infidelity being introduced to the characters than in actually providing a tangible representation of the infidelity. I sort of wish that the existence of Nicky Katt’s character has been left ambiguous.

PopMatters has a review by Bill Gibron which I find myself agreeing with to a certain degree.  “Much of what happens here would probably come across better on the page,” Gibron asserts. “We recognize how minor moments can evolve into unfathomable horrors – human or otherwise – but we miss most of the internal monologues that fiction uses to flesh out these situations. Green hopes his camera and contemplative cinematography will carry us across these plot potholes. Sadly, we struggle to see the significance.”

The A.V. Club’s review talks of the film as being two “separate movies smooshed together”, the story of Arthur and Lila versus the story of Annie and Glenn. I believe that it is two movies, but not in the way that the pop culture website contends. Instead, it’s the quiet movie about the relationships between these many characters coming to important boiling points… unfortunately overshadowed by the louder movie about late-night fist fights and treachery and gunplay. The depth of the first is made shallow by the routine of the second. There are many aspects of the film that work in its favor, but Snow Angels ultimately feels slight because it errs toward the expected.