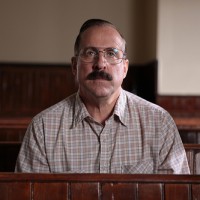 In the past year, there have been numerous films which have been enhanced spectacularly by a score crafted by a band or songwriter rather than a traditional orchestra. There is Daft Punk’s electronic mosaic for Tron: Legacy. There’s the sharp witted, grungy music from The Social Network, as provided by Trent Reznor and Atticus Ross. And most recently, there was the revelatory score from the Chemical Brothers which accompanied Hanna. Intriguing and unique, these scores take what might have been an alright movie before and push them beyond the limit, sometimes adding so much more depth and atmosphere than the images on the screen possibly could. And to this list we can safely add director Ed Gass-Donnelly’s Small Town Murder Songs, a movie which ostensibly stars Peter Stormare (Fargo, Dancer in the Dark), but which finds its breakout star in the form of Bruce Peninsula, the band behind the music of the film.

There are many things to enjoy in Donnelly’s sophomore effort; they are exactly the things that the trailer promises, and exactly the things that made me interested in seeing the movie in the first place. A quiet and conflicted man who must suppress his rage, played by a serious Stormare; gorgeous landscapes evocative of the works of David Gordon Green or Jeff Nichols; a murder mystery set off with quotations making comparisons to the work of the Coen brothers. But standing above all of this is the jangling, rock-gospel sound of Bruce Peninsula. There are a multitude of scenes where characters move in slow-motion to the thumping, ominous sounds of the band’s songs. I don’t doubt that the movie would have worked narratively even with a more conventional soundtrack, but the use of songs like “Shutters” brings a striking emotional intensity to the simplest of scenes. Imagine a group of police officers staring at the body of a murdered woman with a sadness in their eyes, slowly putting up the yellow police-tape to cordon off the crime scene and shaking their heads at the sight. Now imagine that scene again with “Rosie” playing over it. The scene works fine either way, but it’s so much more powerful with the stomping percussion, the echoing discordance of the choir’s portion of the call-and-response, and the growling of lead singer Matt Cully. The fact that the soundtrack seems to take center stage can be no accident: there’s a reason the movie is titled Small Town Murder Songs instead of just “Small Town Murder”.

Beyond the music, though, there’s an extraordinary performance by Peter Stormare (who has put on some weight and is at times unrecognizable). Stormare plays Walter, a police officer in a small Canadian town populated largely by Mennonites. He has recently gotten baptized in an effort to turn his life around from the flying-off-the-handle monster that he, presumably, had once been. We see his past transgressions, where Walter’s violent temper got the better of him, in brief flashbacks. When the body of a naked woman is found in the reeds under the bridge, our boy does his best to keep himself in check despite his gut instincts regarding who the killer may be. The crime affects Walter in a variety of ways; the sight of a dead body is traumatizing enough for a law enforcement official who up until now has never had to deal with a homicide case, but the way that things play out also begins to bring up history and people that Walter had been trying to let go of. It takes a toll on both his relationships and his mental stability. In maybe the greatest moment of the film, Walter sits at the dinner table with his current girlfriend Sam (Martha Plimpton) discussing the case when he suddenly loses it, slamming his fists on the table and barking in frustration. It frightens Sam and the two are hesitant to touch hands again. It’s an incredible shot, a small and perhaps instinctual reaction, but nonetheless one which etched itself into this viewer’s memory.

The mystery of the film, of who this woman is and why she was murdered, never really comes to the forefront of the picture. This isn’t the sort of movie where the clock begins ticking and the good guys have to catch the bad guys before the bomb explodes or what-have-you. There is a murder case at the center of the film, and there is a fair bit of detective work that goes into putting the pieces together and forming a picture of how a body was found where it was found. But the movie is less about the murder and more about suspicion, about making the choice to change the way you act even if you can’t change the person that you are, about acceptance and catharsis and rebirth. How strange for a movie about murder to begin with Walter being “born again” in holy water, except that the journey our protagonist is on is toward purging himself of those sins of his past as much as it is toward finding a killer.

So in some ways, it’s a slow and uneventful film. A lot of the drama involves inner turmoil, exhibited only through those flashbacks and Stormare’s heavy stares past everything, lost in thought and memories. At 76 minutes, the lack of external factors to drive the plot do not feel so burdensome. Still, it’s hard not to feel similar to other critics who have surmised that we the audience are kept at arm’s length from Walter’s personal issues, despite Stormare’s near-constant presence on the screen. The movie is about him, about the transition of his life at this juncture, and yet somehow does not manage to click in the way that it should. The “climax” of the film, wherein Walter is forced to face his demons (both internal and external) head-on, works because we understand what is going on and can comprehend the significance of the moment. But because we can conceptualize Walter’s story while not necessarily being drawn into it on a personal level, the impact is not as great. A horror film should feed your fears, a bitter drama should spur tears, but Small Town Murder Songs shows its viewers the issues Walter must consider – without helping the viewer identify with them. Perhaps more on his personal life or a clearer picture of the focus it took to control his own volatility might have helped to smooth out the roughness.

For all that, the climax does work structurally even if it doesn’t hit you in the back with a baseball bat emotionally. Stormare and Plimpton are both great, but thank god for the score. The times when there was only one set of footprints, that’s when Bruce Peninsula was carrying the movie.