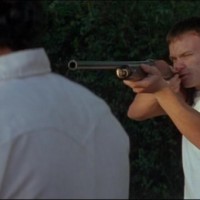 There are a few movies that I find myself returning to time and again when I am writing reviews. I look to them as the standard-bearer in their particular genre or niche, something to which other movies can only hope to emulate. For children’s film, my go-to comparison is Walt Disney’s Lady & the Tramp, a movie which mostly maintains a respect for its audience despite their age. For romance, it’s Say Anything. When I want to talk about a movie that reaches to be comprehensive, making everything work together, I turn to my favorite movie – Atonement. And when I want to talk about what it means to have raw emotion, pitch-perfect plotting, and remarkable achievement in dramatic grasp, it’s Jeff Nichols’ incredible debut Shotgun Stories.

I recently wrote a review for Paul Thomas Anderson’s first feature-length film, Hard Eight, and commented on the relative simplicity of the story. It’s about these characters, their interactions with one another primarily. It gets so much out of so little, reducing the action to motel rooms and diners. Similarly, Nichols’ film is very small, but brings so much to light. It takes place in the economically downtrodden areas of central Arkansas, showing beautiful images of the scenery: cotton fields in the waning sunlight, empty streets with loose dogs, train tracks overgrown with weeds. The characters themselves are trapped in this empty town by their station in life. Son (Michael Shannon) makes $20,000 a year working a blue-collar job at a fish farm, gambling in his spare time in an effort to luck his way out of the life he is living (“It’s not gambling, it’s a system,” he would say). One of his brothers lives out of a tent on the back lawn, another sleeps in his van. They don’t have the money or the resources to change their lives. “This shit is hard,” one brother says, of life in general.

Son’s father was a hard-drinking sunuvabitch who cared even less for his children than their hateful mother, saddling his three offspring with monikers which exhibit how little he cared for them. Son’s two brothers are named “Boy” and “Kid”. After leaving their mother, though, the man began his life anew. He quit drinking, became a Christian, and started a new family with four boys who were given actual names. Since it’s impossible to escape their half-brothers, even more impossible to escape the town they live in, there has long been a bubbling tension between the two families, like a reverse Romeo and Juliet situation. When their father dies, Son curses his father at the funeral and ignites the tension which had previously sat under the surface for so long. There’s only one way that this can end.

Shotgun Stories is a very tense film; the threat of violence is very real throughout, and the action ramps up as the movie progresses. Throughout, though, it could very well be called slow. We see panoramic scenes where Boy and Kid watch some boys play basketball on a court with cracked concrete. They talk idly about the best movies starring athletes, about their favorite sports icons. Boy sits by the lake, drinking and listening to music from the broken radio in his van. Son finds that his wife has left due in part to his gambling addiction and stands, silently, staring into their empty bedroom. I could call the pace “measured” or “deliberate”, but I’d rather use the word brilliant. We are introduced to the characters, their lives and how they live them, we see how little they have and begin to understand how important it is for them to protect their dignity above all else.

It’s not simply the directing of Jeff Nichols or the expert cinematography of Adam Scott, though. There’s a wealth of emotion delivered by the actors that really helps to carry the film through patches that might otherwise be too slow to stay with. Michael Abbot, Jr., as Cleaman Hayes, leader of the named set of brothers is well-cast as the moral guide to his brothers. He shares the same anger of the other six, but he most of all seems cognizant of the drastic consequences that their actions could have in the long run. It’s a fine line that he has to walk, between the strength of remaining defensive while genuinely wanting to keep the water calm. There’s a great moment where he visits Son at his home, asking that the two factions do what they can to prevent the feud from erupting any further than it already had. You can tell that this is a difficult visit for him, but Son refuses to see the significance of it. On a similar note, Douglas Ligon as Boy (in his first feature role, no less) shines as the troubled middle brother. He doesn’t realize the disaster unfolding quite as soon as Cleaman may have, but he is frightened. It is when that fright turns to determination that the performance becomes something extraordinary. As the feud nears its conclusion, Boy’s mood goes from denial to frustration to rage to resolve, all fluidly, all perfectly staged in an understandable mix of emotion.

But most stunning of all is Michael Shannon, whom Nichols was so impressed with that he was cast in the director’s second feature film, Take Shelter, which is due out later this year. One of my favorite scenes in the entire film comes when Shannon stands beside his brother’s tent, ruminating over the events that have thus far unfolded. He is racked with guilt, anger, doubt, an immense sadness. He stares at the tent, teeth grinding and fists clenched. That’s it. When I first saw Harry Potter and the Order of the Phoenix, I praised actor Daniel Radcliffe in my review for moving beyond the point where he had to scream into the wind in order to convey his feelings – he could now bring so much depth to the character with just the look of pain on his face. In a similar manner, Shannon is a real stand-out; the character would have been strong already, but it is through this actor’s performance that it becomes closer to heartbreaking. Watch as Son, provoked by his half-brother Stephen (Lynnsee Provence, Cotton County Boys) growls in retaliation that the battle began a long time before the events of the film. See him look longingly after his wife as she leaves. And when things get rough, the methodic manner in which he continues his work at the fish farm, refusing any offer of consolation. Shannon doesn’t need to fly into a frenzy in order to make his point, although his work in films like Bug and Revolutionary Road indicate that he certainly can play crazy just as easily. Instead, he plays Son as the character is: fiercely protective of those he loves, confident yet flawed.

In my original review for the film, I couldn’t help my excitement at how beautifully written the film is. “When the story takes its inevitable turn for the worse, there’s no corny monologue from the ‘bad guys’, no celebratory epilogue from the ‘heroes’, nothing. The terror is much more casual than that.” Indeed, it’s the threat of violence and the simmering tension which makes the movie click. If there is no ultimate sense of closure, it’s because that is the way that life really is, no title card explaining that this is the end and the story is over. If the events of the movie are settled somehow, it’s a tenuous conclusion at best. It rests on the goodwill of all involved, their will to hold those things at bay which are pressing them down.

Shotgun Stories is an incredible movie. The sincerity of its characters, the perfect pace of its plotting, the revelation of its actors. I really love this movie.