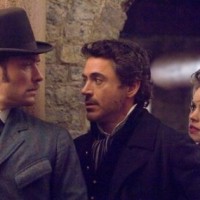 In the interest of full disclosure, I had extremely low expectations for Sherlock Holmes when I first saw the trailer. In fact, I had initially rated this movie as ‘Not Interested’ on the Facebook and disgustedly described the trailer as looking “like one of those fake movie trailers that plays during a real movie… you know, when you watch a movie satirizing the movie industry.”

I can’t say that I really feel much differently about the film now that I have actually seen it. Netflix predicted that I would give the movie a solid 3 stars (Liked It), and what can I say? Netflix knows me. It’s an agreeable film and nothing more. The movie stays firmly just okay for the duration of its runtime. So yes, perhaps it has something to do with my predisposition toward the film that the bulk of this review is going to be a laundry list of complaints, but please: the movie was never all that great even if I hadn’t gone in with lowered expectations.
And heck, if my expecatations were low, shouldn’t a good film have exceeded my expectations?

Actually, one thing did exceed my expectations: Robert Downey, Jr. In my initial ‘Not Interested’ paragraphs, I wrote: “I don’t know how Downey got popular again, but he is squandering it like a pro.” The performance that he gives in this film is a pretty good indication of why he got popular again – he’s a very good actor. He really inhabits the Holmes character and brings him to life. I was very much impressed by that. Beyond that, things start going downhill.

Let’s start with the worst offense. At one point, Holmes and his on-and-off girlfriend Irene Adler are having a conversation when they are interrupted by Holmes’ pet dog farting loudly. There is a brief moment where the two actors stop talking to allow the audience to wipe the tears of laughter out of the corners of their eyes, and then the conversation resumes. I don’t care what other positive attributes a film may have, I am not giving full marks to a movie that sets time aside for a doggie fart joke. Upon hearing my knee-jerk disdain for this film before I had viewed it, fellow critic Caleb Chadwick told me that it is not nearly as bad as Transformers 2. This moment was the one time when it might very well have been.

I can probably sprint through my next few complaints.
1) There is the matter of Watson’s bride-to-be, a woman who shows up in the movie for maybe two scenes and is of no importance whatsoever. I don’t really understand what her function is, except maybe to reinforce the idea that Holmes & Watson are inseparable. I’m gonna whip out Occam’s Razor on this one and say that that sentiment could have been expressed just as easily without hiring another useless body.
2) How about the incomprehensible plot? Holmes is on the trail of a mysterious Lord Blackwood, a supposed sorceror who rose from the grave and is plotting out some weird conspiracy that involves the murder of dozens of innocents. Blackwood’s sorcery is (spoiler?) obviously an elaborate sleight of hand, but if the viewer expects to guess along with Holmes how each trick is being performed, then said viewer is out of luck. The methods are ridiculous. It feels like a sadistic sort of bait-and-switch when you’re led to believe that you should be able to see the strings and then come to find out that the marionettes were actually being supported by an elaborate, futuristic, magnetic air-compression device all along. I’m speaking metaphorically, of course.
3) I’m being perhaps needlessly critical here, but there was at least one moment (I think you’ll know it when you see it) where Watson, if not Holmes, should certainly have died. There is no compelling explanation for how Watson managed to survive the catastrophe that befell him, so the film doesn’t even try to make one. I know, I know, it’s just a movie!, but come on. While I’m being too critical, let me also mention that the overt reference to a thrilling sequel was hard to stomach (though I know that more and more movies are doing it these days), doubly so for referencing said planned sequel with that vomit-inducing phrase: “There’s a storm coming…” If I could excise any cliche from all of movie-dom, that just might be it.
4) Crappy CGI. Why? Here’s my stance on terrible computer graphics: if you don’t have the money to do it well, then don’t do it at all. Certainly there are ways to write dazzling action sequences that don’t rely on special effects gimmickry. If you can’t do it right, don’t do it at all.

That’s about it, I guess. You might think that I’m being too harsh, and maybe I am. Maybe I was determined not to like the movie, but I tend to believe that if Sherlock Holmes had truly been good then it ought to have been able to overcome my initial skepticism.

HOWEVER, let me mention real quick that there was one particularly stunning scene. Holmes is waiting in a restaurant for Watson and his bride-to-be, as the three of them are going to have an evening together. While waiting there, Holmes has to work to block out the sounds of the other patrons chatting around him. That’s one more point in the movie’s favor, actually, the style with which director Guy Ritchie showed Holmes’ mental processes being slowed down and thought through before repeating the same events in real-time. In this instance at the diner, though, it was just a matter of cutting to each conversation or sound for a split-second while Holmes’ expression grew increasingly perturbed. It’s no wonder that the detective had holed himself up inside his apartment: when your powers of perception are as enhanced as Holmes’ have to be, it must be nearly impossible to function in society. When you perceive everything around you, how can you have any sort of normal interaction with other human beings? This idea was hinted at very briefly, but unfortunately was never really addressed again. Afterward, all instances of the detective’s superior powers of perception were included as ways for him to deliver a biting quip.
Too bad.