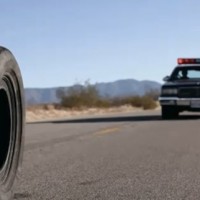 “Ladies and gentleman, the film you are about to see today is an homage to the no reason,” a police officer explains, staring directly into the camera, as Rubber begins, “that most powerful element of style.” It’s a compelling opening statement, and this emphasis on style lets the viewer know from the beginning where this film’s true allegiances lie.

There are many critics who have complained that the film effectively inoculates itself against criticism by admitting from the start that it intends to be bizarre, that its goal is to experiment and play around, that it wants to make you uncomfortable, and that it has no reason for doing so. I can’t see that as a valid form for a critical view of the film to take, this complaint that by discrediting the detractors, the film is thereby immune from any negative critical analysis. Likewise, writing Rubber off reflexively on the basis of its self-aware, or, ahem, “meta” nature is a form of criticism that is surprisingly common and equally unfounded. The excellent television show “Community”, which shares a star in Charley Koontz, has been subject to similarly shallow criticism.

One of my favorite filmmakers is Gaspar Noe, director of Irreversible and Enter the Void. I bring Noe up quite frequently in my reviews because of my fondness for his work; because I regard his films so highly, it’s easy to make comparisons to other movies that I watch. In Irreversible, the first half hour or so of the film is accompanied by a dull humming noise which, in some viewers, induces nausea. This is in addition to Noe’s wild style of camerawork, which has the image spinning upside down and at odd angles at any given point in the movie. These choices can make his work a challenge for many viewers, a good portion of whom are immediately resistant to the style. It’s an easy parallel to draw between Noe and Quentin Dupieux, director of Rubber. After the opening monologue, the camera cuts to a group of people standing in the desert with binoculars… waiting for the film to begin. One member of the group spots a garbage dump in the distance, and as we see from her point of view, the credits begin to play as an eerie, wavering score warbles over the scene. Throughout the film, music plays a huge role in setting the tone – perhaps not surprisingly, given that Dupieux is better by his techno-music persona Mr. Oizo.

The film proper concerns a tire, who we later learn is named Robert (because it sounds like Rubber, get it?), which comes to life mysteriously. Well, it’s not exactly a mystery. Only so if you’re the sort of person inclined to ask, “Why does a tire come to life?” The answer, of course, is in that opening monologue: no reason. Robert has some trouble learning to move properly at first, but as he gets the hang of it he realizes that he can crush things by rolling over them. When he later encounters an object that won’t just crush, he takes a step back (a roll back?), shuddering violently as the sound of a jet engine starts up and crickets chirp loudly, eventually destroying it purely by using hit new-found psychokinetic powers. Why does he have psychokinetic powers? If you need to ask, you aren’t listening. In some ways, Robert is a sadist. As he experiments with destruction, he soon learns that disemboweling living creatures is more fun than blowing up beer bottles. His attention naturally turns to making people’s heads explode, which you may have gathered if you have seen the trailer, and at this point the film sounds exactly like an unintentionally hilarious D-grade horror flick. In some ways, it is.

In other ways, it is much, much more than that. While there are times when Robert appears to be the villain of the film, there are an equal amount of scenes in which we are invited to feel for the tire. When first introduced, the tire starts to slowly shake its way out of the dirt as the camera lovingly watches in soft-focus close-ups. We watch Robert roll in circles at first, see him cautiously approach a plastic bottle – the first object that he has encountered in his short existence. He touches it with gentleness at first, then once he’s sure of its malleable properties, speeds over it. The way that the movie makes its viewers believe in this tire’s consciousness is extraordinary. As one of the desert-viewers marvels, “Amazing. This is the first time I’ve identified with a tire.”

Now, as for those viewers watching through binoculars in the sand, they interject into the action at odd times to comment on what is going on… or rather, to remind the audience that nothing is real or important. They aren’t needed long, though, because the action grows so absurd that it’s hard to tell where the line between the supposed reality of the film and the “reality” of the viewers can be drawn. The police officer from the opening re-appears as a character within the story of Robert the tire, then later calls his squad together to tell them that the movie they are in has reached its conclusion and that they should all walk off set now. The other officers, just as you might in the same situation, wonder if he has lost his mind. Though some take the events of the film with deadly seriousness, others don’t mind stepping out of character or taking out a script to read their lines when it feels right. This blurring of the lines between the two realities of the movie (and our reality, in some instances) makes for an exciting ride – one whose twists and turns are impossible to see coming. Where Gaspar Noe’s films are enhanced by their fluid handling of spatial relationships and Spike Jonze amazed with an in-Malkovich race through time in Being John Malkovich, Dupieux’s film has a playful relationship with the very fabric of existence. It’s astounding.

I’ve probably already gone into too much detail in my attempts to describe the unique vision of Rubber. On a more technical level, the film has some majestic cinematography. Watching the film while thinking about which image would serve as a good thumbnail/banner for Glasgow to the Movies, my wife and I were amazed to find that practically every shot was artfully composed, so much that practically any single frame of the film would be perfect as a example of what the movie has to offer. And if the deft handling of the film’s reality, the atmospheric score, and the dazzling cinematography weren’t enough for you, the movie is also hilarious. Led by go-for-broke performances from Jack Plotnick and (especially) Stephen Spinella, the movie has a bevy of quotable lines which often made me double over in laughter.

I don’t know what else I can say. Rubber is a refreshingly original, tightly handled, gorgeously shot, riotously funny, spectacular movie.