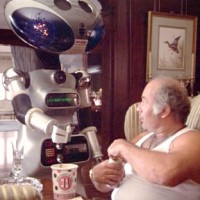 I went into the first Rocky movie expecting little more than a sports drama, and what it turned out to be was one of the most moving romances this side of Say Anything. The second movie was not quite as heartfelt, but the third movie managed to find some of that magic once again. It had me thinking that I was happy to declare that I am a fan of the “Rocky” series.
But then came Rocky IV.

Everything that I ever loved about the movies is forsaken here. At the start, we are invited to a party that the Balboas are throwing at their opulent mansion for Adrian’s brother Paulie. He blows out the candles on his cake and is given his birthday present… a giant, talking robot. “Make a wish!” the Balboa family screams at Paulie.
“I wish I would wake up from this nightmare!” Paulie exclaims. I’m with you there, buddy. Alas, it is not a nightmare at all. There really is a giant, talking robot in the movie. It plays music and speaks with the other characters as though it were a real live boy. At one point, Rocky says this immortal line to his son: “Don’t forget to feed your robot.” But we’re just getting started.

In Roger Ebert’s review of the film, he asserts that the movie “represents almost everything that the original 1976 Rocky Balboa would have found repellent.” Indeed. It’s a depressing thing when the most emotionally affecting moment in your movie is a montage of the previous three movies. IV tries, but without any passion, it seems. Adrian and Rocky share a tender moment thinking about the nine years they have been together, but it is devoid of any of the sweetness that the previous movies managed to convey. It feels forced, false, and sickening.

Soon enough, a Russian boxer named Ivan Drago (Lundgren) arrives in order to face all challengers. He is more cartoon-ish than Mr. T, able to punch his foes with something like 2500 pounds of pressure. He is also pumped full of steroids, but that subplot doesn’t really go anywhere. I guess it’s just because the only way that anybody could be stronger than Rocky is if they’re doing a lot of steroids. Whatever. But first, Apollo Creed decides that he can take Drago on and the next scene is a grotesque American pride extravaganza in the boxing ring, complete with fireworks, dancing women, a giant golden elephant head, and of course… James Brown. I know that Creed came out in the first movie dressed as George Washington, but this? This is ridiculous. That lunacy thankfully leads to perhaps the one amazing moment in the movie: the fight between Creed and Drago.

I don’t want to get too spoilery here, so I’ll try not to say too much about how Rocky ends up flying to Russia in order to fight an unsanctioned boxing match there and later gives an impassioned speech encouraging our world leaders to end the Cold War. Instead, I’ll mention that the Rocky IV is chock full of stupid ’80s adrenaline-rock songs. Almost every scene is propelled into the next with a heavy dose of rock music, regardless of whether it makes sense or clashes drastically with the tone of the previous scene. It’s very sloppy.

Drago is stupid; there’s an attempt near the end to give him some motivation, but it’s tacked on and cheap. In III, there was a wonderful moment where a seemingly monstrous challenger showed after the fight that he was actually a very nice person – he was just playing the part of the bad guy for the crowds. IV doesn’t bother with trying to humanize Drago or the Russians. Even though Rocky claims that people can change during his speech at the end, nobody is shown as having changed. Nobody is shown as a real human being at all.

I loved the previous Rocky movies because even when the dialogue got corny, the interactions between the characters really sold me the realism of the scenes. That is entirely missing from IV. Either the characters are turned into weak shells of who they once were or are not expanded on at all. Creed is a joke, Adrian is pointless, Rocky is a bore.

And there’s a giant, talking robot. Is there really any more than needs to be said? This movie sucks.