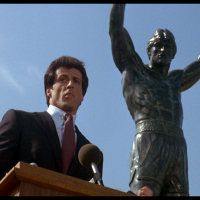 I think I may be in the minority among viewers of the Rocky series, in that I saw the first film and realized that it was in fact a romance… and I’ve been watching for that ever since. It’s true that this movie can in no way live up to the one that started it all, but it still surprised me by making the characters actions remarkable for their realism (even if the dialogue gets clunky).

Also, I realized for the first time while watching Rocky III that our hero Rocky is a lot like Popeye. After the third movie, it’s a bit of a formula. The Italian Stallion thinks he can beat his challenger, but needs to do a lot more training to get into the peak physical condition in order to come out on top. Unlike Popeye, though, Rocky isn’t a wimpy guy who turns into a super-hero when he eats a can of spinach. He’s pretty strong all the time, but he’s got to overcome real-world problems: pride, fear, a lack of focus.

So even though we kinda suspect that Rocky’s got to win in the end, this is the first movie where the fight itself really interested me. The story was built around the fight, which is unusual for the series. In the previous movies, there was the story… and then it led to the fight. Here, the fight is an integral part of the story. It works as more than just a spectacle – it’s another dramatic moment, complete with its own turns.

There are a few real dramatic moments like that which make this film stand above the mostly middling second installment, I feel. There’s a touching scene with Mickey right after the first fight, a scene with Rocky/Adrian and their son, the conversation with wrestler Thunderlips (Hulk Hogan) where Rocky introduces his family and they discuss the nature of wrestling, the first ending, and of course a spectacular scene on the beach involving Rocky and Adrian (mostly Adrian). All of these are powerful scenes, a couple of which almost brought a tear to my eye.

That’s not to say that the movie doesn’t have its flaws. As I mentioned before, the dialogue is often clunky. An argument that Rocky and Adrian have late in the film sounds way too scripted coming out of both actors’ mouths. Adrian’s brother Paulie has largely been a nuisance in all of the films and completes his metamorphosis into full-blown pest here. Perhaps he can be salvaged if there is a better focus on him in the future films, although I suspect he’ll probably remain a useless secondary character… but my fingers are crossed. Apollo Creed shows up and repeatedly implies that Rocky owes him a favor… which leads to the second ending, an epilogue that ought to have been cut from the film altogether – along with any references to it. It’s cheap and not amusing. And yes, sort of going back to the dialogue, I have some problems with Rock’s decisions early in the film; they don’t seem to make much sense, even given some information we find out later.

Still, the things that work actually work really well. Again, I turn to the final showdown against Clubber Lang (Mr. T) to illustrate the difference between this film and its predecessors. There’s more to the fight than “they fight, Rocky wins”. There’s strategy here, stuff that the audience is not aware of at first… and which we are unsure of the effectiveness of later on. For my money, that drama is worth more than the mistakes every time. I definitely liked this movie.

Have you seen this movie? Then continue reading below…

But going back to my first paragraph, a few words about the romance of Rocky. The first movie was very much a romance, which was not at all what I was expecting when I saw it. Adrian was a reclusive, dowdy pet shop girl who was afraid of being hurt. She and Rocky found each other and the second movie showed them living in a pretty nice apartment that his winnings had earned him. They were both working for a living, and in my review for that film I mentioned that it was showing them making it through their marriage, “for better or worse”.

I thought back to the 7 Up series of documentaries when watching this movie. That series chronicles a group of children as they age, viewing them once every seven years and letting viewers interpret their choices and actions by the people that we knew that they were before. Was a given person’s divorce preordained? In Rocky III, Rocky has been doing advertisements and charity events which have made him a huge star. He and his wife are living in a mansion – a striking departure from the neat little apartment from the previous film. Adrian has begun wearing make-up… she’s hardly recognizable as the shy girl from the first film.

And so we move to the scene near the end of the movie where she confronts her husband on the beach after he seems to have given up. Yes, the dialogue here is pretty bad. She keeps prodding him, trying to get him to reveal the reason that he doesn’t want to go on. Eventually, he screams at her that he is afraid. They are not alone on this beach – there are people in the background, playing in the surf. This is a private argument that has come to a head in an unfortunately public area. Adrian yells back at the boxer, “I’m afraid too!” But she tells him that it’s okay to be afraid, because as long as you give your all to what you feel strongly about, there will be no regrets. When all is done and gone away, all that will be left is themselves and their family – Rocky should do what makes him the happiest.

There’s a pause. Rocky looks sweetly into his wife’s eyes. “I love you,” he says with a slight smile. “When did you get to be such a good fighter?” BAM. Wow. I almost cried. Because we have witnessed the growth of this relationship over the course of three movies… because we know who Adrian was before and how different it is than who she is now… because of the real love that these two characters share. Goddamn, it was about the best thing I’ve seen since the original Rocky.

And that’s why I’m giving this movie four stars.