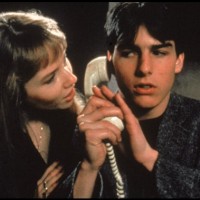 Risky Business has a plot that could go two ways.

It’s about an upper-class college student named Joel (Cruise), who is unlike his peers in that he has not been guaranteed a spot in a prestigious Ivy League college. Even his pal Curtis Armstrong, who plays the drug-obsessed friend of John Cusack in Better Off Dead, is destined to go to Harvard. But Joel, well… his grades are pretty mediocre, and although he’s been participating in a whole bunch of after-school programs to create a winning resume, he still feels that he doesn’t have what it takes. He isn’t in it to win it. He asks his classmates, “Are we all just trying to make money, or do we want to do something?” Perhaps unsurprisingly, they all want to make money.

And have sex. When Miles (Armstrong) calls an escort service to help loosen Joel up, the stakes get higher. In trying to embrace his buddy’s philosophy (“Every once in a while, you’ve just gotta say, ‘What the fuck?'”), he greets the prostitute who arrives at his door with a great deal of enthusiasm. Luckily Joel’s parents are out of town, so when this girl Lana refuses to leave the house, it’s only a minor problem. But it’s soon to grow, as Lana steals a priceless crystal egg from the house, getting Joel mixed up with her “manager” Guido. Then, foreshadowing Ferris Bueller’s Day Off, Joel manages to wreck his father’s Porsche, and before you know it…

Yes. He turns his house into a brothel. Hilarious and sexy, no? It sounds like a right good old teenage coming-of-age romp, right? There isn’t as much nudity in the movie as one would expect considering the subject matter, but a lot of times it does seem to live up to the silly and light-hearted affair that a one-sentence synopsis like that would seem to imply. Lana’s hooker friends joke that they have found a great source of business, since Joel’s friends are sweet and fast. Joel begins wearing the iconic Ray-Bans because he has become so cool and awesome. And so on.

But there’s a darker undercurrent here, too, which the movie also occasionally hits on. If Joel does not make enough money from running a prostitution ring out of his house (how adorable!), his parents are going to return to find a vandalized house in disarray. As Joel embraces the philosophy of WTF, he loses track of himself – he misses tests, he ruins his chance at getting into Princeton, he allows himself to be taken advantage of. And now that he’s taken away all of Guido’s whores, Joel has to face the very real prospect of having his appendages removed by hired goons. But we’ve gotta get it all done by Sunday morning!

And I didn’t even mention the other theme, the capitalist scrawl that underlines the entire thing… a suggestion that may or may not have been serious at the time, but can’t be seen as anything but satire now. Or it would if it weren’t for the way that the movie ends. Rumor (i.e. IMDB) has it that there were two different endings filmed for the movie, and the test audiences were left to decide which one was the most appropriate. In one ending, Joel gets everything he wants and the movie ends on a happy note. In the other, Joel’s having succumbed to this dark philosophy eventually catches up with him and his life comes crashing down around him. Take a guess which one ended up in the final cut, then consider whether the film would have been more impressive if it had gone the other way.

If Risky Business is a comedy, it is funny only intermittently. If it’s a dark drama, it is too often absurd. If a combination of the two, the pieces are jagged and in odd places. It is my expert opinion that if the movie had stuck to its guns and gone one way or the other – fully embracing either its comedy aspects or its darker moments, it would have been a much stronger film overall. As it stands, there are interesting parts but it all amounts to a less than satisfying whole.