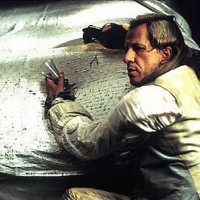 I’m not entirely certain what the goal of Quills is, whether to revel in the perverse mind of the Marquis de Sade or to hold high the value of art for art’s sake, or is about the libertine lifestyle – some celebration of freedom of any stripe? Perhaps there is no greater goal in mind and looking for one is reading too deeply. In any case, it’s not clear where the movie is coming from and so aside from being occasionally humorous and featuring a typically flamboyant performance by Geoffrey Rush (often fully nude), the film itself ends up feeling useless. Its central character thrives on the written word, but has nothing to say.

Well, that’s not entirely true. De Sade has a lot to say, in the very literal sense, in the sense that he will turn to wine and chicken bones for writing utensils if his quills and ink are removed from his quarters. Given the chance, he would cover the world in prose – his mind is bursting with lines, a sickness which seems to consume him seriously but which is not explored in any meaningful manner. That’s the issue here, though: that nothing is explored in any serious way. De Sade turns out manuscript after manuscript, we get snippets of titillating sixteenth century sexual innuendo which all other characters find thrillingly obscene. When the authorities, in particular Dr. Royer-Collard (Michael Caine) begin to crack down on de Sade’s publishing, those brief snippets are replaced by mere images of words that our intrepid hero has written. Words without meaning, words that exist simply because they are words. In protest of the good doctor’s strict rules, de Sade writes a novel from head to toe on his own clothing, but is it a novel? Is the purpose of the film in what he is writing, or in the fact that he is writing at all? I think the answer must clearly be the latter.

What, then, is the meaning of his writing? Is it individualism? There are countless scenes where the Marquis proves quite reactionary, so it cannot be about pure individualism. Could it be, as Roger Ebert suggests, about the virtue of embracing who you are? It’s difficult for me to sympathize with this reading either, as the need to compose – though comic and enjoyable for his readers – is hinted at being a genuine illness in his mind. Unless we’re content with saying that de Sade was simply embracing that he is a sick, sick man, this interpretation doesn’t hold water. Perhaps it’s time that we take the argument and pare it down with Occam’s Razor – that principle which states that the simplest explanation, the one which requires the least extraneous parts, is usually the one which is accurate. Sometimes a cigar is just a cigar, as they say, and in much the same way, perhaps sometimes a borderline PG-13 movie about the Marquis de Sade is just that, nothing more.

Which is to say that Geoffrey Rush is enjoyable as the demented yet inventive Marquis. Joaquin Phoenix is also memorable as the abbot who is torn by his dedication to his God and his very human lustings for the companionship of a woman. Michael Caine and Kate Winslet are also in the movie. This alone is fine, and there certainly is some bit of fun in the back-and-forth between the Marquis and those who run the mental asylum Charenton where the writer is kept. It does remain silly and light, despite the fact that Dr. Royer-Collard is introduced in a castle filled with assorted simple tortures. When it comes to de Sade, the worst that can be done is putting him in a dunk tank. And though the doctor takes a young bride and sexually assaults her on their wedding night (on the basis that it is a wife’s duty), this rape is hardly discussed and even made light of later. There’s even the suggestion that perhaps it was equally pleasurable as humiliating for the young victim. I guess we could say something like “well, what do you expect in a movie about the Marquis de Sade”, except that this is one of the few times when the perversity of his writing actually seeps into the film itself.

In general, Quills is spectacularly dry. Despite Rush’s gung-ho performance, there’s little else to recommend here. Whatever the movie intends to explore about its cast of characters, it’s done in a particularly shallow way. Take the Abbe du Coulmier, for instance, in his inner battles with the desires of the flesh versus the grip of his resolve. He’s the most conventionally conflicted character and in that way perhaps the most rounded. In contract, the hypocrisy of the doctor is dramatically agreeable but much too obvious to be engaging, and his young bride Simone is entirely one-note. But returning to the abbot, he gets into many a verbal tussle with the de Sade over the utility of his religious beliefs, then later has to restrain himself from gettin’ romantic with the servant girl Madelaine (Winslet). And… that’s about it. That’s the extent of his character, the depth of his demons. Maybe I’m wrong to seek emotional weight in everything that I watch, but the film has otherwise failed to be relatable on a thematic, metaphoric, or even erotic level – it seems the least we could ask for is characters worth caring about.

Alas, it’s not to be. The one truly note-worthy aspect of the film, as has been mentioned repeatedly already, is its lead. That is it. That is all. There is nothing to say about the directing, nor about the script. When I got done watching Quills, I was asked what my rating would be. I responded that the movie was okay, but that I was unsure how to rate it because I was unsure whether I liked it or disliked it more, or even why I would have cause to feel one way or the other. Having written this review, I’ve come to an easy conclusion: I dislike the movie more than I like it. I dislike it not because it makes some egregious cinematic faux pas, but more because it provides nothing to be excited for.

Let me step back and say this a little bit more floridly. Quills does not skimp on the words – it covers the walls with them, in all sizes and styles of script, in any type of ink you please. From there, though, the best it can manage are short phrases, some bold swear words, the illusion of some larger coherence. The words are there to construct into proud poetry, but without an author more adept, they relate to the reader almost nothing at all.