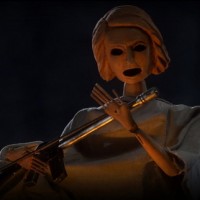 What really drew me to Protagonist, directed by Jessica Yu (Ping Pong Playa), was its central conceit. Taking stories from four different men with wildly unrelated experiences – one an ex-gay minister, one a martial arts enthusiast, one a former bank robber, and the last a former terrorist – and winding their thoughts together to deliver more profound ruminations on such lofty topics as certainty, self-image, community, and masculinity, it was easy for me to imagine that the film would be an unofficial follow-up to Errol Morris’ stunning documentary Fast, Cheap, & Out of Control.

So if my judgment of Yu’s film is wrapped up in what it lacked compared to Morris’ work, I apologize in advance. However, throughout the entire runtime of Protagonist, I could not get out of my head these thoughts about how Yu fails in comparison to Morris. One of the magnificent things about Fast, Cheap, & Out of Control is that although it had some ideas about where the four subjects’ thoughts can be strung together, it leaves a lot of the heavy lifting to the audience. The movie gives its viewers wood and nails, but allows you to build bridges of your own design between the men on-screen.

Yu’s film does not allow its audience that luxury. The entire film is framed with a contrived marionette show which sometimes acts out the memories of the interview subjects, but mostly just provides a way for the movie to direct the audience’s thoughts. “Okay,” the movie seems to be saying, “Now think of these next few answers within the context of the ‘cost’ of these men’s decisions.” I understand that there is a great skill involved in taking seemingly disparate experiences and sorting them together in order to create a larger picture – that is certainly impressive in its own right, and I would be lying if I said that Yu’s ultimate thoughts on the above mentioned topics aren’t engrossing. But it’s hard to stay in-the-moment when you’re drawn out by the staged interludes.

I’m not the only one with these concerns. The A.V. Club’s review of the film seems to share my feeling of being rubbed the wrong way: “Where some documentarians approach their subjects and say, ‘Tell me your story,’ Yu seems to say, ‘Let me tell you what your story is.’

Again, let me be clear: this does not mean that the film is useless altogether. Though the stories of the four men do not seem to be driven naturally from one plot point to the next, they nevertheless all seem eager to speak about the dramatic turns that their lives have taken. Each has come to a realization about themselves long before the cameras began rolling, they all feel very comfortable explaining their journey. Each man grew up with this intense desire to have control of their own destiny (hence the overwrought marionette symbolism), but find that in their attempts to exert control, they have lost themselves to the temptations of false idols. Before you can know who to follow to find the “truth”, you must first know yourself or else know that you know nothing. But then, the movie is nudging you in the side and whispering, “Now think of this in terms of Reversal.” Thanks a lot, movie, I definitely would have never made that connection without your help. Now think about that last sentence in the context of Sarcasm.

The lines of thought that the documentary tackles are intriguing, but not absorbing. Maybe I’m not drunk enough for it, but it’s hard for me to imagine the need to pause Protagonist every few minutes to explain some deeper connection that I’ve made to the meaning of life in the same way that I do when I watch Fast, Cheap, & Out of Control. Because the scope is much more limited, it’s easier to be distracted by those blatant framing devices. Altogether, Yu has crafted an enjoyable documentary, but it’s certainly too measured and contained to elicit any greater truths. In short, it’s missing the quality that made Morris’ film so free-wheeling and fantastic: this movie is not out of control.