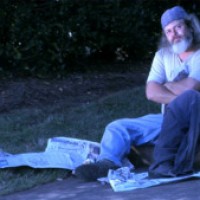 I know that this is “gonna rile some feathers”, but Praise Band: The Movie does not deserve any praise!

Now that we’ve got the pull-quote out of the way, let me tell you what this movie is “shaping up to look like”. The movie tells the tale of a church pastor named James who has to choose a new music leader after the one that has been working for Crossroads Community Church for the past 20+ years decides to retire. James is caught in the middle of a terrible controversy here, as he really needs to find a way to appeal both to the younger generation who are into this new-fangled devil-music rock’n’roll while also appealing to the conservative older generation who prefer to hear hymns the way their mothers and their mothers’ mothers used to sing them.

Oh woe is James! But then he meets Matt, a charismatic youth who is eager to help out at the church, even though it means leaving his friends and family by moving three hours away from them. The only problem: Matt wants to start a praise band! Oh no, the elders at the church – represented pretty much solely by the crotchety Wayne Wilson – aren’t going to like this!

But Matt’s music manages to grip everybody else in the congregation. I’m sorry, it’s not Matt’s music at all… it’s GOD’S music. Matt has nothing to do with it. It’s not long before others are trying to audition to join the band. By audition, of course, I mean that they are accepted immediately. There’s Jenny, the piano player. There’s Mark, who tries to speak to Matt about how he saved the church from falling apart, then concludes his speech by saying: “Anyway, I just want to let you know that I play bass.” Mark, by the way, is experiencing some trouble at home with his wife. She wants to get a divorce, but he is unwilling to accept that their relationship is dead. Every time she is around, he tries to convince her that she still wants to be with him… he even tells people that he meets that their separation is not permanent. He is living in a deep state of denial. But then, the film doesn’t really explain why they’ve grown apart in the first place. Mark is shown always as a good guy, despite his references to fights he’s had with his wife where “insults were thrown… and so was the hair dryer.”

And then there’s Luke, who plays the drums. When we are first introduced to this character, he mentions that he is a science teacher. For anybody who knows anything about Christian films, there is no such thing as a Christian science teacher. Christianity and science are in direct conflict with one another, mostly because Christianity is bogus superstition… but the movies like to set it up as science being closed-minded and exclusive. Despite the reticence he feels playing drums for a Christian band, Luke joins up with the guys because he’s got nobody else to play with. But hanging around with a bunch of Christians only weakens his defenses. It’s not long before sublimely ridiculous incidents are making him question his, ahem, “faith” in science. There is a scene where Luke is teaching his students about the Big Bang theory. “What about the widespread belief in an intelligent designer?” a girl asks, using the phrase widespread belief to lend an unearned credence to the preposterous notion. Luke wisely responds by saying that that isn’t a scientific theory. Way to go, Luke – you’re not overstepping your bounds as a representative of the state by taking sides in a religious argument, just dismissing a fairy tale as being unscientific. But then a second girl interrupts: “Actually, it is.” What?? She goes on to explain that Intelligent Design is, like, totally a scientific theory because [WATCHMAKER ARGUMENT]. Amazingly, Luke seems to be impressed by this batshit insane and a million times refuted analogy. Some science teacher. But then, it later comes to light that Luke is very much afraid of death. We atheists are always very worried about death because we will have to spend our afterlife conscious, but in eternal darkness. How nice it to believe in an unspecified Heaven area where unspecified good things happen all the time! So perhaps it is unsurprising that Luke does not remain an atheist for long.

Finally, there is John. John plays the guitar also, and he is mostly introduced to complete the Mattew, Mark, Luke, John, and Jenny combination. He came to Jesus because some guy gave him bread in the park. In exchange for the slice of bread (which the the guy was going to give to birds instead), John agreed to read the entire Bible. And his life was transformed! So, like a warped Wizard of Oz, our intrepid group – Jenny (Dorothy), Matt (Toto?), Mark (The Scarecrow), Luke (The Tin Man), and John (The Cowardly Lion) – set out to make the church into the jumpin’ joint that we all know it was meant to be. They’re bringing more people to Christ every day, and you know why? As Luke explains, Crossroads Community Church is a place where you “don’t have to check [your] intellect at the door.” No, because you’ve got to get rid of your intellect long before you even get to the door of this church.

But hey, stupidity comes part and parcel with Christian films. How about the production quality? The acting is all very wooden, and many of the things that I quoted above (e.g. “gonna rile some feathers”) are actual quotes from the movie, where the actors read the lines as they were written instead of realizing that metaphors were being mixed and correcting them on location. There is a lot of singing here, and the lip-synching is consistently terrible. The guy who plays Matt barely opens his mouth, while the soundtrack has a full-throated wail coming through. The actors are obviously unfamiliar with the instruments they’re playing, and for some reason, a narrator is introduced at the film’s conclusion to help wrap everything up.

Ah. Praise Band: The Movie (as opposed to…?) is a bad movie. It’s also a dumb movie. But compared to a lot of the Christian films I have seen, it’s relatively tame and the production gaffes could probably be forgiven by one who was trying to take the film seriously. All in all, it’s an earnest film that is unfortunately not well-written or well-acted, and which even more unfortunately refuses to take its characters or their religious beliefs seriously. The trailer shows Wayne Wilson erupting at the idea of a praise band, and that is pretty much how shallow the movie is. Motivations are unnecessary, we’re doing this for Jesus.