Planet of the Apes 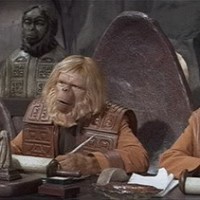 Going into the original, Charlton Heston laden Planet of the Apes from the late 1960s, my knowledge of the film was mostly limited to the “twist ending”. I put it in quotation marks like that both because it has become so ingrained in our cultural psyche that it’s as well-known as what the ingredients are in Soylent Green, or the truth about the identity of Darth Vader, and also because once you watch the movie it’s clear that the ending is obvious from the opening lines. Aside from that, I knew little except that the movie involved a human crash landing on a planet run by… well, I don’t want to spoil the surprise for you. What I was not expecting was the venomous attitude that the film would hold toward religion – a product of the McCarthy years, I’m told: a period during which alleged Communists were put on trial in the nation’s capitol at the behest of ultra-conservative fearmongers. It’s hard to imagine the film becoming so popular amongst the masses with its blatant anti-religious leanings, least of all while starring the guy who played Moses in The Ten Commandments.

To begin, we are introduced to an astronaut who goes by the name of Taylor (Heston), one of a group of three – and one sex slave – who have been shot into the outer reaches of space with no particular purpose in mind. They crash land on a mysterious planet, get out of their aircraft without any type of spacesuit, and paddle a raft across a lake until they get to shore. Not one of the astronauts is inclined to comment on the fact that the air on this planet perfectly allows the three of them to breathe, that the temperature is mostly comfortable (though perhaps a touch humid), that there is liquid water in great quantities here, or even that they managed to fly through space for thousands of years without getting hit by meteors/burned up in a star/sucked into a black hole. Scientists, these men clearly are not. The more I think about it now, their indifference to these miraculous coincidences combined with the fact that they’ve each volunteered for a mission to nowhere that will leave them stranded thousands of years in the future with no hope of ever returning home, makes me wonder whether they were not in fact criminals being used in a sadistic experiment like some kind of animals that are used in experiments.

This is all well and good for a while, but then the group stumbles upon the dominant species of this particular planet. SPOILER: It’s apes. Through a series of disastrous events, Taylor ends up alone and caged up just like all of the other humans on this planet. Yes, there are other humans on this planet. He is treated like an animal, expected to mate with whatever female is put into his cage (not that this is a problem for Taylor, but it’s still demeaning). His captors talk about him with disgust, spraying him with a water hose to keep him away from the lock and stripping him of the tattered scraps of clothing that he has managed to hold onto.

But all of this is mere prelude to the revelation of what Taylor is for this simian culture: a missing link. There are those, such as the ape scientists Zira and Cornelius, who study human beings because they believe that the work might somehow provide greater insight into the ape condition. But since their government is a theocracy led by an orangutan name Dr. Zaius, the Chief Defender of the Faith and also the Minister of Science, whatever work they have done is sure to fail. In a moving centerpiece marred only by a stupid “hear no evil, see no evil” joke, a group of Elders hears Taylor’s case in a courtroom setting, denying scientific findings because they are not in concordance with the writings of their holy book. The image of a man standing up against authority figures who turn a blind eye to truth or justice in favor of closed-mindedness can be applied to a multitude of scenarios of course (e.g. the terror of McCarthyism wasn’t specifically religious), but Planet of the Apes deals directly with religion by making the Ruling Council analogous to evangelical Christians.

Where Zira and Cornelius see the arrival of a talking human as a sign that apes did indeed evolve from man, the Elders insist that he is a fraud and wish to see him killed in order to remove themselves from the problem of having to answer to a living, breathing heresy. I had stupidly imagined that the movie would be mostly an action-thriller: we the audience would watch Heston doing his damnedest to escape from the clutches of those dirty monkeys. While there is a fair bit of that action vibe going on, including numerous near-escapes and threats of violence, the majority of the film involves the suprise and awe that the scientists feel in the presence of the anomaly that has fallen into their society, or scenes of Dr. Zaius and his comrades doing their best to obscure the issue at hand by throwing their holy book in front of it. When Taylor questions the book’s description of a Forbidden Zone (“Why is it forbidden?”), it seems a question that has never been brought to mind previously.

Taylor describes his ship’s requisite sex slave as their “Eve”; that is, they had planned on procreating once the ship landed and starting the human race anew. In reality, it is Taylor himself who fills the role. The Bible’s book of Genesis has the Eve character taking a bite of fruit from a Tree of Knowledge despite her leader’s explicit prohibitions against the stuff. Knowledge is evil here; Taylor’s insistence on making a scene of existing, or of galloping out into the Forbidden Zone on a horse (seriously, they have horses on this planet? Even if you’re unimpressed by the water as a non-scientist, you’ve got to admit that having horses is fairly strange, right?), makes him the inevitable downfall of Apekind. With knowledge comes a desire for liberty. But to those in charge, the best policy for the people is the idea that “ignorance is bliss” and liberty is better left long forgotten.

So what I’m really trying to say is that Planet of the Apes is a fun little sci-fi tale, one with a unique perspective and some jarring directorial choices virgule camerawork that help it really pop. And it’s one which addresses the terror of authoritarian corruption along with limiting religious constructs in a shockingly unambiguous manner. In short, I kind of really liked it.