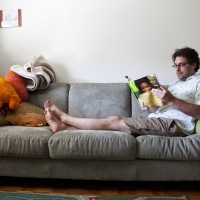 A while back, I watched a movie called Queen Sized based primarily on the fact that it starred Lily Holleman. There is only one reason that I know who Lily Holleman is, and that is because she is the girlfriend of director Phil Leirness, who I know way too much about thanks to the magic of the internet. There is only one reason that I know who Phil Leirness is, and that is because I went on IMDB to read about a film called The Story of O (which Leirness re-made), read his comments there, subsequently found his website and Twitter account, and then watched every film he’s made that has been available to me. It’s about to get creepier, so buckle up. The reason I bring up Queen Sized in particular is because there is a man who does not appear in the movie at all – his character is already deceased at the start of the film, and so he appears only in photographs. Because of my connection to Leirness, which led to my connection to Holleman, which was bred by this frightening ability to delve into everybody’s lives on the internet, I was able to find the Facebook profile of this man who wasn’t really even in the movie. I could see his personal photos and read his Facebook wall, no problem. I have similar stories about the cast of Facing the Giants, who were not very appreciative of my admiration, but that’s a story for another time.

The reason that I tell you these personal and somewhat disturbing anecdotes is because I am exactly the sort of person that Hal Niedzviecki’s Peep Culture is about. Our lives have moved onto the internet, to such an extent that 13 hours of footage are uploaded to YouTube every second. That footage is not the stuff of brilliant auteurs, generally, but instead mostly random snapshots of people’s lives. Their thoughts, their buying habits, their sexual preferences, their weirdness on full display. Before there was Facebook and Twitter, there were LiveJournal and Xanga (readers of the future, I’m sorry that these words have likely lost all meaning to you), blogging sites which invited users to share their every thought for the world to see. I know I’m not the only one with the compulsion to dig distressingly deep into other people’s lives online; it’s a tendency that’s hard to escape since the shovel is right there: just click on somebody’s profile and start scrolling down.

All of which is to say that there’s a very intriguing premise behind Peep Culture. How did we come to this? Why do people put all of their information on the interwebz for anybody to see, willingly voiding their privacy – is it out of a need for some kind of attention, or does it come from a maybe unconscious desire to be a celebrity? Why do others spend their time exploring the lives of those who put themselves out there – is it a way to feel some connection with others, to feel some sense that these people are just as strange as we ourselves are? LifeCasts are continuous video of people’s lives, and they are extremely popular. FrankTaylorsLifeCastBeach currently has 10 viewers, and has had more than 700,000 views altogether. Why are there 10 people watching a deserted patio on a windy day? These are fantastic questions, and given that Niedzviecki’s film is based on a book that he wrote on the subject, you might expect that the documentary would attack the issue from an academic angle. You might think that the film would be a psychoanalytic discussion of the wires in our brains which make these behaviors become conventional.

You would be wrong. The movie is largely a Morgan Spurlockish (Spurlockesque?) gimmick, as Niedzviecki agrees to set up camera around his house to monitor him 24 hours a day, driving himself and his family slowly insane. The reasoning behind this is: “How can I say that the peep culture is wrong if I don’t try it myself?” How can I say that eating nothing but McDonald’s every day is wrong if I don’t try it myself? To be fair, he does travel and speak to some people who are big players in the phenomenon. There’s a man named Justin, your typical LifeCaster; there’s a girl who is an artist but posts nude photos on the internet because it attracts more attention to her art; there’s a woman who lost some 400 pounds and kept a blog about it which remains popular to this day. But do these people really have anything useful to say about the phenomenon, other than to explain the reasons that they themselves put their lives out there for people to see? Their reasoning isn’t particularly insightful; for instance, Justin’s answer seems to boil down to a simply just because. Niedzviecki later joins up with a group of twenty-somethings in a kitchen to discuss the problem, and they spout off such falsely profound truths as: “Gossip has moved online”, “It doesn’t make you a celebrity, but it feels like it”, and “It’s about company, not friendship… who would talk to you if you left?”

Then, to prove that he’s really serious about this project, Niedzviecki attends a camp for wannabe reality television stars. The camp teaches you how to find your inner character without inventing a character – how to find the essential, dramatic aspects of your own personality to accentuate them for the camera. Hilarious, right? But what does it mean? Sure, it’s a gas to watch people sitting around thinking about how to brand themselves so that they stand out in a crowd of nobodies, and sure it’s hysterical to watch a production team view a video of our narrator and discuss the pros and cons of why he should be on reality television, but is there really any deeper truth here? Are we any closer to determining why I have access to a photo from Ben Savage’s nephew’s birthday party? It doesn’t seem like it.

There is an attempt at providing some kind of metaphorical Jerry Springer final thoughts about the subject late in the game. Niedzviecki talks about a video he once saw of a streaker being tased by police officers while a group of gawkers gathered around in a circle. He talks about how disturbing the video was, not for the action of the authorities, but because of the way that everybody watched as though it was not a big deal. They took video with their camera-phones, they texted each other about it, it felt so commonplace. So is “peep culture” about becoming desensitized somehow? That was never addressed previously in the film, am I just misinterpreting the meaning here?

Peep Culture takes a fascinating concept and goes nowhere with it. The film is ultimately very shallow, hardly scratching the surface of what’s driven this massive shift in human communication. Rather than showing our narrator playing games and making jokes, the film would have benefited from interviews with scholars who have studied the subject – anthropologists, sociologists, neurologists… not some drunk kids in a kitchen.

The movie wanted to be about the social network, but in the end it does not work.