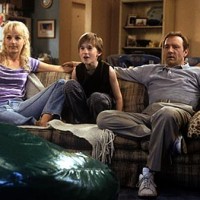 One of the reasons that I started the “Letter Game” on my website here, aside from being a desperate grab for attention, was the hope that I would receive suggestions for movies that I would otherwise never have seen. Very recently, it was suggested that I watch the 1970s noir Night Moves, which I had maybe heard of before but never thought much about, and I found it to be extremely enjoyable. For the letter P, I unfortunately did not receive any suggestions. Looking through the choices available to me on Netflix Instant, though, I found myself gravitating toward the only movie Haley Joel Osment was in aside from The Sixth Sense (just kidding, of course, Osment was also in Edges of the Lord with Willem Dafoe). I had avoided Pay It Forward for eleven years – it seemed pretty clear to me that if I was not given a reason to watch it, I probably never would.

To be honest, a lot of the reason that I never had any interest in the film is that I had imagined it to be sappy and sentimental. To those of you for whom the film has faded from your consciousness, it’s the story of a boy named Trevor (Osment, duh) who gets it in his head to begin an altruistic science project, wherein one does something extremely helpful for three other people (say, giving them a brand new car when theirs is totaled) – but it’s gotta be something big, something that they could not have done on their own. Then, assuming that the human spirit can truly conquer all, those three people will then do something nice for three other people, and so forth ad infinitum, until the whole world is, in essence, passing it forward in a continuous loop. Terrible as it is to say, I don’t think I’m alone when I admit that the idea of a movie showcasing a bunch of people being nice to each other and then finding fulfillment and happiness afterward sounds booooorrrrriiiiiiiiinnnnnggggg.

But the movie is not as shallow as I, or most of the critics who panned the movie at the turn of the century, might have imagined. It might be easier to look at it with a more objective eye now, years later, where what looked like insincere Oscar bait at the time now feels much more like a solid picture. I had expected the movie to be brimming with sappy scenes of good deeds, smiles, a general feeling collective understanding and celebration of the indomitable kindness inherent in us all. In fact, the phrase that gets repeated most often here is: “the world is shit.” Don’t get me wrong, it’s all to lead to a greater understanding of the human condition, but the journey there is a lot more fun than most give it credit for.

When Trevor is given an assignment by his teacher, Mr. Simonet (Kevin Spacey), encouraging the boy to change the world, he immediately sets about inviting a homeless man into his house. It’s a small thing, really, just giving him a bowl of cereal, a bed (!!!) to sleep in, a little bit of cash. Despite the assistance, the homeless man returns to the drugs that had put him on the street in the first place, and Trevor has to cross him off of his list. Well, he tried. He then turns his attention to Mr. Simonet, the teacher who had inspired him, and the bulk of the movie from that point turns much more introspective. Simonet, Trevor’s mother, and to a lesser extent Trevor himself, are all damaged souls. They have been mistreated by life, by those around them, making it easy to see why each of these characters might have gotten it into their minds that life does not get better.

But here’s the thing: the movie is not about what Trevor does. I spent a lot of time in my review of Let Me In, the remake of the superb Swedish vampire movie Let the Right One In, discussing the significance of the aggressiveness in its title. Similarly, I think it’s important to point out here the significance of this film’s moniker. The movie isn’t called something like “Forward Paid” or “The Pay It Forward Movement”, and maybe part of that is because those titles don’t have the same aesthetic appeal. In addition to that, though, there’s the the verb tense. It’s instructive, it’s continuous, it’s active – it’s an action. When our boy hero believes that his attempts at making the world a better place have all but failed, his teacher tries to console him by saying, “I was grading you on effort anyway.” That sentence is the crux of the film.

I’m sorry to give this away – SPOILER, if you must, but it’s such a small thread in a larger story – but the homeless man who disappointed Trevor by returning to his old habits later finds himself walking along a bridge in a new city. He sees a woman who plans to take her life by jumping from the bridge and frantically tries to dissuade her. It’s only in that moment that the meaning of Trevor’s gesture hits him, that the boy put himself out there for another human being in a way that nobody else would be willing to do. It’s not about what is accomplished when you pay kindness forward, but instead about the gesture itself, about the paying itself. Of course, there’s a lot of drama in finding out whether what the intended effect takes root, but the reason that a reporter (Jay Mohr) dedicates months of his life to tracking down the originator of the “pay it forward” concept is not because of the gift he was given by a complete stranger. Instead, it’s that he was given a gift by a stranger in the first place.

There are certainly things about the movie which are hard to stomach. Jon Bon Jovi’s awful performance as Trevor’s abusive father is thankfully off-set somewhat by a timeless classic playing over the scene. Jovi is nothing, though, compared to the disgustingly schmaltzy finale. I couldn’t help but laugh after reading the RottenTomatoes synopsis for the film, which concludes that “the movie itself is too emotionally manipulative and the ending is bad.” Indeed, the ending is just that: bad. Where I had been impressed by the rest of the film for avoiding becoming too cheesy, the final moments cobble together everything that I had been afraid of and throws it all together before the credits roll. There may be other moments where the movie reaches toward the over-dramatic (it is my belief that these moments are have been purposely exaggerated by other critics), but we can at least find consensus in the determination that the ending is just terrible, absolutely terrible.

These things are not just glaring missteps, they’re blinding. It’s a testament, then, to the strength of the story otherwise that the movie rises above them. Maybe it was Oscar bait, but I loved that all of the actors – Kevin Spacey, Helen Hunt, Haley Joel Osment, Jim Caviezel, Angie Dickinson – everybody had a chance to deliver one great monologue, to tell their story. When Simonet, shaking, describes the way that he came by the scars on his face… I don’t care what the haters say, it’s a powerful moment. And Osment, like Macauley Culkin, would never be capture the same gravitas as he did when he was eleven years old. Every scene between he and Spacey is like magic, and the intensity of his stares stands in contrast to his otherwise adorable-moppet persona.

While not life-changing, nor is it extraordinary, Pay It Forward is a perfectly enjoyable film despite its groan-worthy last leg. Outside of any expectations, the movie can easily thrive. It’s a simple movie with above average performances from its leads, and a score from Thomas Newman that is strangely.. familiar. Altogether, I feel that Pay It Forward is a much better picture than many give it credit for. While nobody would dare call it perfect, I found it entirely endearing – that alone is more than I had expected.

One Response to “Pay It Forward”