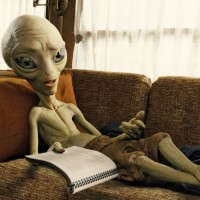 Paul is a pretty fun movie. Let’s get that out of the way right now.

From having written reviews for years now, with more than 1000 under my belt (most of them have yet to be liberated from Facebook), I’ve gotten a pretty good idea of what constitutes, say, a 3-star film. That consistency is something that I pride myself on, and when other film critics (e.g. Roger Ebert, the A.V. Club staff) complain about the star system, claiming that the stars are meaningless, it grates on my nerves. I’ve written about this topic before and will certainly do so again in the future. My firmly held belief in the value of consistency in the star rating has led those closest to me to sometimes make a game of it, turning my rating system to things other than movies. Christmas? 4 1/2 stars. Fourth of July? 3 1/2.

What I’m getting at here is that once I was finished viewing Paul, I knew immediately that it was a four-star film. There’s not really any way to put into words what a 4-star film is (aside from, you know, writing a review); what I mean is that there is no rubric that I can provide where I say that in order to attain four stars, a film must meet these specific requirements. It’s a gut feeling, in a way, but one that I feel confident can be discerned by people who are paying attention. I liked Paul a lot – it was very funny, in places, and the references to various science fiction films from the heyday of Spielberg feels warm and sweet, rather than tawdry in the way that most of today’s entertainment approaches cultural milestones, where reference=joke — ’nuff said.

But how to write a review of the movie? I don’t really feel like I have a lot to say, and since I feel that the review is a place to defend the star rating, to explain the issues that I had with the film that prevented me from awarding the film a higher number of stars and to discuss the things in the film that make me want to talk about it, how could I provide a coherent account of what makes the movie work? Despite liking Limitless a bit less than I liked Paul (both were released the same week), I felt more confident in being able to complete a useful review for that film because I had a pretty good idea of what I did and did not like in that movie. With this movie, it’s just… I mean, it just wasn’t… it didn’t quite… the thing is that I…

I was discussing this with my wife last night when I suddenly realized what my problem was. The problem is the way in which I have been approaching the stars. I’ve always thought of 5 stars as the starting point, and when I feel compelled to award a movie less than five stars (which, truthfully, is about 99% of the time), my thought has been that I have to explain what left me cold that forced me to deduct points. It occured to me, though, that those few times when I’ve felt driven to hand out the 5-star rating, it was because I could find little to complain about, yes, but also because the movie reached out to me in some way. You don’t get to five stars simply by not doing anything wrong – you get there by doing something right. When I give out the highest grade that I can to a movie, it’s because it blew me away. My image of the prototypical 5-star film is Atonement, and what continues to amaze me about that film is not that I had little to criticize. Instead, it’s because I found myself marveling at the extraordinary cinematography, the gorgeous score that weaves its way into the action, the spectacular acting by leads James McAvoy and Keira Knightley. I don’t mean to turn this review into a four-years-late defense of Atonement, but instead to simply illustrate my point: I don’t love that movie because it is flawless; I love it because it is fantastic.

So, 700 words in, can we finally tie this all back to the movie at hand? Like most everything that Simon Pegg and Nick Frost have created, Paul is extremely enjoyable. Their two characters, English chaps who journey to the U.S. de A. in order to visit Comic-Con and wind up harboring an extraterrestrial fugitive (voiced by Seth Rogen), are quite likable and charming. They have an easy friendship between them, which gives secondary characters the tendency of referring to them as gay. They are not, but they do rely on each other substantially, so that when one of them begins to experience new things without the other’s presence, feelings of hurt and betrayal are felt. Paul, being a literal outsider, can brush off these emotions as ridiculous – and he’s right – but the fact remains that the two men begin the movie closer to one another than anybody else, while events force them to allow other people into their circle.

So I do have praise for the movie, and very little negative to say. There are several very funny scenes throughout the film, and I particularly love how easily the characters accept Paul. He’s a “little green man” with huge, bulbous eyes and a gigantic skull; it’s no wonder that many people are afraid of him at first sight – in many movies that include aliens from outer space, the aliens are billed as monsters, villains, beasts that have come to abduct our women and probe our anuses (ani?). Aside from being initially startled by the sight of Paul, though, most every character finds it easy to treat him as an equal. It’s not two guys, a girl, and an alien trying to stay away from the Feds. Instead, it’s just four people mostly just on a wild road trip.

But there’s nothing that pushes the movie further for me. Maybe that’s a strictly personal judgment, but let’s not kid ourselves – it’s impossible to be flatly objective no matter how hard one tries. This is a movie that makes me smile, and one that I’d be more than happy to watch again. But it’s not one that pulls me back for repeat viewings, not one that has me shouting excitedly from rooftops. Viewing Paul is a great, great ride, but it is a ride. You get on, throw your arms in the air and scream giddily through the loops, but once it’s over you get off and move on to the next attraction. The film simply did not provide the interactivity or sense of awe that would encourage me to give it more stars.

There is absolutely no shame in a four-star movie, of course. I feel very positively about this film. Because it didn’t resonate with me in the way that I would have preferred does not mean that the movie has in any sense failed. As I said before, I’m sure I’ll continue to refine my feelings about the star system and write about it again in the future. I can’t really tell you what the stars mean, I can only tell you how I feel.

I feel good about this movie.