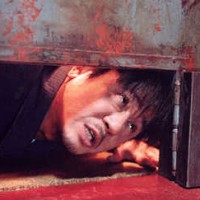 Oldboy is a lot of style, and a lot of substance. Whether the substance is anything substantial, though, is open for debate.

The movie is about a drunk named Dae-su, who is picked up by his friend from a police station on the eve of his young daughter’s birthday. Before the night is through, he will have been abducted. He awakes to find himself locked in a room with little more than a television set, a bed, and a painting that reads, “Laugh and the world laughs with you; weep, and you weep alone.” He does not know who his captor is, why he has been chosen for this detention, or even how long he will be locked up. He spends his days becoming close friends with the television and teaching himself to fight by punching figures he has drawn on the walls. After spending 15 years in captivity, Dae-su is freed.
It’s all downhill from there.

Not to degrade Oldboy, since it’s a Korean film and all foreign films are masterpieces, but the movie that it reminded me of most is Saw. After his release, Dae-Su is far from free. Whoever has had him locked away all these years is still keeping tabs on him. He can’t go anywhere with any certainty that he will be free from the watchful eye of whatever evil person has kept him locked up. He’s not even sure who he can trust. The outside world is just a bigger prison, and the claustrophobia does not let up. Dae-su desperately searches for answers, while his life and that of the girl he loves are both in danger.

And that’s the movie. Giving away more is giving away too much, as the plot really depends on the little clues and false leads that Dae-su gains throughout the film. There’s a one-take fight scene in a beautifully-lit underground tunnel, which I guess is supposed to be memorable. One-take scenes are starting to lose their sense of grandiosity, though, because they’ve gotten so popular. Everyone’s doing it. And although it came out two years later, The Protector pretty much wins the one-take fight scene battle hands-down.
But seriously, director Chan-wook Park finds some pretty magical moments. When Dae-su passes out while eating a live squid, the sight of a bright light underneath his face and the squirming tentacles is pretty memorable. A chase scene near the end involving images from both the past and present reminded me of Tarsem Singh’s The Fall for its Escher-like staircase sequence and also of John Sayles’ Lone Star for the fluidity with which the past and present scenes intersected.

What kind of ruins the movie is the ending, which I don’t want to spoil for you. So let me try to speak in general terms. The full extent of the evil plan is explained, and we all get to smack our foreheads saying, “Of course!” But then Dae-su reacts to the news in a manner that doesn’t suit his character at all, at that point. Then the movie takes a rather convenient out, rather than seeing its twisted story through to the end.

In addition to the stylistic choices, the real treat of the movie is in the endless psychological and physical torture of Dae-su, the fact that he is trapped even when he is supposedly free. Where Saw saw that plotline through to the bitter end (not to mention innumerable bitter sequels), it almost feels as though Oldboy slams on the brakes just before it crosses the finish line.
And I don’t really understand why.