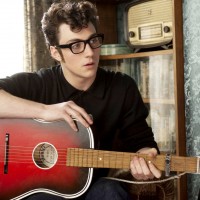 Early on in the weird John-Lennon-has-mommy-issues flick Nowhere Boy, a school official who is frustrated with Lennon’s REBELLIOUS streak announces, “You’re going nowhere!” Thus, in addition to a shameful joke on an actual Beatles lyric, the title is also deeply MEANINGFUL. That line is humorous, also, because we of course have future knowledge. We know that young Lennon would one day become bigger than JESUS.

But this movie takes place long before Lennon overtook Jesus in fame. Here, a young and vaguely emo John Lennon shakes his fist at God for not making him Elvis Presley. THE rock star of the time, Elvis represents for this movie the desire for FAME. Or else, he represents CONFORMITY. The movie doesn’t really seem to have that all hammered out yet. Maybe I’m wasting my time looking for symbolism and deeper themes in a movie like Nowhere Boy, where the central idea seems to merely that Johnny L’s mommy didn’t love him enough.

The movie consists almost entirely of Lennon (Aaron Johnson) bouncing back and forth between his seemingly drugged out mother and his perpetually scowling aunt. His aunt has been his caretaker since Lennon was very young, but now that he is in his mid-teens, John wants to have a relationship with his mother – and boy howdy, does he ever. Lennon’s relationship with his mom borders creepily on the edge of romance. She lies in his arms while the two of them listen to music together, he tries desperately not to touch her breast. Her husband seems oblivious to the flirty way the two interact, or perhaps he’s just giving her the benefit of the doubt – she can’t really intend to have sex with her own son, can she? I wouldn’t put it past her.

It’s difficult not to see this through the lens of the real-life events in star Aaron Johnson’s life, given that the 19-year old married the director of this film, 42-year old Sam Taylor Wood. Is Lennon’s mom supposed to represent Wood? Either way, it’s extremely disturbing, not least of which is because of the bratty and childish way that the character acts throughout the movie. He has violent mood swings, thrashing around at people and then apologizing in tears. He pretends not to care about what his mother thinks, then gets jealous when she starts licking her lips at young Paul McCartney.

Speaking of which, yes, the younger versions of Paul and George enter the picture with John. I feel so bad for the actor who plays George, though, because he is in maybe three scenes and has one line of dialogue: “I forgot to bring a hat.” I’m sure he was so elated to get the part of George Harrison in a movie, and then it’s such a useless role. But that’s because the movie isn’t about the Beatles at all. Lennon’s interest in playing music seems to be merely part of his REBELLIOUS attitude. When he tells Paul that he has written a couple of songs, it’s hard to believe because, hey, when would this kid write?

Altogether then, Nowhere Boy is NOWHERE NEAR as good as it could have been. See what I did there? There is one effective moment, a montage showing Lennon’s slow learning of the banjo, which I really enjoyed. Some hints at a traumatic past that the character has nightmares about held a lot of promise, but were unfortunately rewarded with a limping pay-off. It’s hard to tell who we are supposed to be rooting for, as an audience, or even if we’re supposed to be rooting for anybody. The characters are almost all obnoxious, the transformations over the course of the run-time either forced or false.

There’s no reason that Nowhere Boy had to be about John Lennon. One might argue that it’s allegedly a true story, but if that’s so, it’s a boring story that never needed told. A friend that I saw this with said he’d heard that the movie was having trouble finding a distributor. After viewing the movie, he said he could understand why: “I don’t know who it’s supposed to appeal to.” This film will be unsatisfying to Beatles fans and casual movie-goers. It’s just a little pitiful movie.