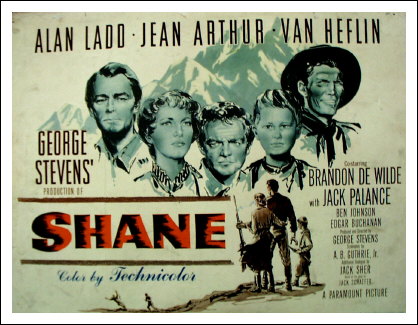 The day and time are officially set! The third ever MCT Live will be this coming Sunday August 28th @ 8:00 PM EST. Once again, the film this month is Shane starring Alan Ladd, Jean Arthur, and Jack Palance. This 1953 western has twice made the 100 (Greatest) Movies list composed by the American Film Institute and was nominated for 6 Academy Awards, winning one for Best Cinematography (View the original trailer here).

In case you missed this event the last two months, here’s how it all works:

Step 1: I choose a movie to sit down and watch for the first time.
Step 2: I log on to Twitter as @MEIER_in_a_CT.
Step 3: You log on to Twitter and follow @MEIER_in_a_CT (if you don’t already).
Step 4: You read and, if you like, respond to my tweets as I’m watching the movie. Since live-tweeting a film demands a good chunk of an individual’s attention, don’t be too heartbroken if I don’t immediately or ever reply to your tweets (If I can’t find a chance to personally respond to you – and I will try – I may just retweet your tweet.) Also, watching the same movie at the same time is greatly encouraged! (Perhaps with Netflix?) If you choose to actively take part, remember to include the hashtag phrase “#mctlive” within your message of 140 characters or less.
Step 5: You go to GlasgowtotheMovies.com the next day and find the entire live-blog (Warning: I WILL post anything that includes the aforementioned hashtag or that I’ve chosen to retweet during its formation – obscenity censored) under “Meier! in a Crowded Theater”.