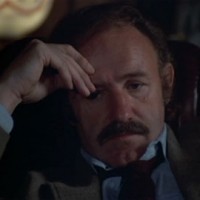 “What’s it about?” my wife asked, when I told her that I was planning to watch Night Moves. It’s a noir starring Gene Hackman, I told her. “It’s supposed to be complex.”

Boy, is that an understatement. Hackman plays Harry Moseby, a private detective of the classic variety. He smokes and drinks and whiles his hours away in an office that is usually empty. He’s committed himself to the lifestyle of the private eye, and though he is offered a job in an office that utilizes high-tech surveillance equipment on a regular basis, Harry is more comfortable laying low and picking up the clues one by one. My knowledge of the film noir is hideously limited; the only other film that I can make a comparison to is Robert Altman’s The Long Goodbye. Well, that and Who Framed Roger Rabbit. All three movies have a similar theme to them as detective stories: the idea of a good investigator who has overstayed his welcome. In this film and Altman’s, the P.I. tries to make the gumshoe life fit into the world of the raging ’70s, often to little success. Roger Rabbit similarly features a detective wishing to stay immune to the changes going on around him (the good ol’ days of Eddie Valiant, played by Bob Hoskins, will soon be disrupted by the invention of the freeway).

Harry Moseby is almost anachronistic. He doesn’t belong where he is, in more ways than one, but what’s even more important than that is the fact that he doesn’t know it. I’m not going to play coy with you, the point of the movie is that nothing adds up. I wouldn’t have understood that if it weren’t for the multitude of other reviews that I read as soon as I finished viewing the film. Some have gone to great lengths analyzing the disparate threads and overwhelming symbolism that the movie holds. There’s hardly a line in the thing that doesn’t have a double meaning. I don’t feel that I’m spoiling anything by admitting that up-front, unless you’re one who believes that the discovery of the loose ends is part of the fun. Maybe it is. Maybe I’m being incredibly insensitive to those who have yet to see the film, but I don’t know how I could talk about Night Moves without speaking about it directly.
It only makes sense in the sense that it doesn’t make sense.

In that respect, it makes for a movie that I appreciate far more than I like. Which is not to say that I didn’t like the film – I enjoyed it immensely. There are so many absolutely beautiful shots (the most famous being an underwater view through the glass bottom of a boat), and I’ve read about the staccato way that the film cuts between scenes, an effect that I was aware of only subliminally while viewing. And though it has the tendency of sounding entirely too literary and therefore unbelievable, at times, the poetic way that the characters talk is often quite poignant, or at least gives the illusion of poignancy. Believe me, for a movie that delights in false leads and miscommunication, this is far from a slight. When asked who is winning a football game, Harry deftly responds: “Nobody. One side is just losing slower than the other.”

This is to say nothing of the aching relationship drama which underlies the entire plot. Harry and his wife have a marriage that is falling apart. Their conversations together are loaded with tension; there is as much miscommunication here as there is throughout the rest of the movie, in the sense that neither husband nor wife are aware of the true feelings of the other, even after they have a shouting match in the kitchen. Or perhaps they are aware, but unable to cope. There’s a remarkable moment when Harry opens up to his wife about a case that he followed in his youth, but again the lines between what he’s saying and what he means are hard to distinguish. Is the story a sincere moment of honesty, a metaphor, both? There are so many moments like this, where the action freezes momentarily and Hackman delivers a stunning soliloquy. A reflective moment concerning the JFK assassination (itself open to interpretation, natch) is unforgettable, and the chess game which provides the title of the film is another almost perfect moment.

Which brings me back to my previous point. Night Moves is a fantastic film. Perhaps on a second viewing I will regret saying this, but this insistence on style over substance can make for a frustrating watch. Maybe that’s unfair to say. Maybe it would be better to say that the style is the substance. The mistakes, the misleading clues, the multiple meanings, the lack of any hard information… this is what the movie is about, really, and looking for a coherent and clearly drawn story arc is a fool’s errand. This isn’t the story of an event, it’s a slice of life, of Harry Moseby’s life. And it’s a marvelous mystery which would feel right at home being analyzed in a classroom setting. The movie is dense. It’s, well, complex.