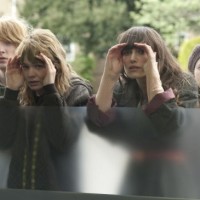 Never Let Me Go is science fiction, though only tangentially. The dotted line that makes up the outlines of the plot involve three children who grow into young adults with only one purpose in their lives – to eventually donate their organs for the good of mankind. That alone is kind of a spoiler, but I don’t think it will ruin too much for you to know that. There is more that will be revealed in the movie that I have not yet touched on: things that you will not recognize the importance of at first, but which will gain weight after the fact.

But although the film has these loose ideas holding it together, the strongest facet that the movie would like to bring to the forefront is its emotional center. These children are being harvested, basically, so their lives are sure to be much shorter than the average lifespan. How can you build a solid relationship when you know that you’re likely to outgrow your usefulness before you’ve even turned thirty? What if a relationship takes time to bloom, when time is not an asset that you can lay claim to?

So the movie wants to be a melodrama, narrated by Kathy (Mulligan) as she reminisces on her time growing up with friends Ruth (Knightley) and Tommy (Garfield). Kathy has a crush on Tommy that is not a secret to anybody, but unfortunately it is Ruth that ends up with the boy. But they’re all friends, so Kathy is content to think wistfully of what might have been and listen repeatedly to a cassette tape that Tommy once gave to her. Isn’t it romantic? I had heard from a friend that the movie was going to be incredibly sad, monumentally depressing. Perhaps my perception of the film was colored by these preconceptions, but I don’t think so. The movie wants its viewers to feel bad for the kids, for their short lives, but I didn’t.

The problem, I think, comes in the fact that the characters are not humanized well and in the rushed pace. We cut quickly from the schoolyard teasing to the teenage curiosity to the adult resignation without any driving force to make these act breaks necessary. The story doesn’t come about organically, but is instead forced from one point in time to the next. This might not have been so noticeable if the characters’ relationships were better developed. Keira Knightley’s presence in the film naturally reminded me of the stellar film Atonement, which is perfect on almost every level – not least of which is the emotional one. Here, Knightley has a moment where she confesses her own atonement… but the scene is listless. We just don’t care about the characters to invest in how their lives turn out, and when Ruth claims that she has spent a great deal of time considering her options, it’s impossible to take seriously because there is no concrete sense that time has been progressing naturally for the characters.

So a movie which aims to move its audience totally fails to deliver. The strongest moments in the film come when the children have to interact with the outside world and do not know how to react. When a waitress tries to take their drink order at a restaurant, the three main characters have absolutely no idea how to respond. Perhaps this could have been given a stronger focus, along with a better sense of time elapsing. The movie could have been driven by the idea that she characters are still just learning to function as human beings when their lives are expected to be stripped away from them. That might have actually given the movie some of the weight that it thought it had achieved.

Instead, we have… I don’t know. I can follow the plot and I understand what it was going for. The filming is adequate, although not extraordinary. There is nothing that is extraordinary about Never Let Me Go. Not even the fantastic actors at the center of the film bring anything to the table. The movie comes and goes and the more I think about this movie, the less I like it. I wanted to say that it’s a good movie, but doesn’t reach the emotional resonance it wanted to. But when the emotional resonance is almost all the movie was seeking to achieve, can I really still say that it was a good movie?

Maybe it would be more accurate to say “it wasn’t a bad movie”, or just “it was a movie”. Never Let Me Go is a movie.