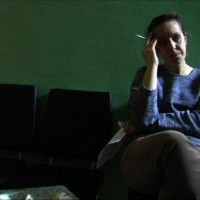 I have a lot of respect for Robin Hessman, director of the documentary My Perestroika. Going to a screening that has a Q&A with the director afterward will tend to do that, since it gives the creator a chance to talk about the struggle that went into producing the finished product. And given that Hessman is a truly independent filmmaker, serving as producer and cinematographer in addition to her duties as director – I mean the kind of independent filmmaker who sleeps on people’s couches during production because there’s no budget for anything more – it’s easy to see her film and admire the woman for her spirit of perseverance, just for finishing the film at all. I must remember not to let my admiration for the director color my analysis of the film too much. Hessman’s brainchild is a feature-length film following five middle-aged Russians, classmates who went to the same school in Moscow and came of age through the fall of the Soviet Union and the birth of modern Russia. While this is an intriguing concept, the movie doesn’t do much to push it beyond a concept; that is, I’m not sure that the film has a point of view other than simply being historical.

To some extent, it remains effective nonetheless. The AV Club’s review makes the comparison that I had in my head during the screening, which is to the Seven Up series of documentaries. Those films follow a group of children every seven years to see how their lives have changed and to allow the viewer the opportunity to reflect on what influences from the past have shaped them in their future. Though Hessman only interviews her five participants at their current age, she provides the illusion of a long-term project by incorporating home video footage of the group as children, newsreels, and the testimony of her subjects’ own children. The five speak about their lives in the USSR, being taught the rightness of Communism, at least one woman indoctrinated to the point that hearing the national anthem was enough to cause her to shoot to her feet in salute, weeping with passionate love for her country. They discuss their teenage years in the tumultuous political landscape that ultimately led to the Soviet Union’s collapse, and how each as an adult have adapted to their newly capitalist society.

There are no leading questions, in fact the documentarian’s presence is not felt in the movie at all. We never hear her asking the group to elaborate on anything, no “Tell me more about how you perceived the United States as a child”. Errol Morris, a former private investigator turned documentary director, treats his interviews like a game. He seeks quirks in his subjects, he latches onto phrases said in passing when he sees that there may be something of interest in it. By contrast, Hessman’s work is more anthropological. She took the time to get to know these people, to gain their trust and patiently follow the story that they wished to tell. The word My in the title is key: this is a story from the subjects’ perspectives only. So it follows that the film takes on a fairly conventional narrative structure, revolving through the interviewees and following their growth in a linear, chronological fashion. There are few times when Hessman has a clear aim to purposely juxtapose thoughts or images in order to drive toward some larger point.

So with the exception of the shifting political landscape – which, I grant you, is a major consideration, but stay with me here – with the exception of the shifting political landscape, there’s not much to ground the movie. I know, that’s like saying that with the exception of the sinking ship, there’s not much to Titanic. But what’s so wrong with that, really? There should be more to develop the film than an iceberg. Similarly, without the moment where the Soviet Union hits its own iceberg (metaphorically!), what we have here is a group of middle-aged people whose experiences are not too far removed from that of somebody who grew up in the U.S. Yes, these people endured a fundamental change in their country’s entire economic system, a change which they necessarily must learn to cope with. But in general, they all claim to have had blissful childhoods (you don’t get many opportunities to use the plural of ‘childhood’), went through some teenage rebellion of varying intensity, and have blossomed into politically desensitized adults who marvel at the way that their own children live with a blissful cognitive dissonance regarding the fact that their country had a significant upheaval in their parents’ own lifetimes (not as unusual to use the plural of ‘lifetime’).

Or, as one viewer put it in a question after the screening, “The more things change, the more they stay the same.” There are hints that perhaps this is the overriding narrative that Hessman was intending to portray. We see footage of the subjects as children, walking with their parents and carrying flowers on Knowledge Day, the first day of school. Later, we see them now as adults, maintaining the tradition with their own children as the bells ring in the 131st year of this particular school’s existence. If this is indeed Hessman’s goal, it makes the title of the film brilliantly ironic, given that “perestroika” is Russian for restructuring. There may be some truth in this reading, given the inclusion of a founding member of a metal/rock group who has grown older and left the band, though the group itself soldiers on. Or for another example: though the controlling Communist state has been abolished, the citizens still have little sense of democracy. At-the-time current president Vladimir Putin backed Dmitry Medvedev as his successor; all five interviewed subjects believe the elections to be largely for show. Sure enough, Medvedev took control.

So My Perestroika is an engrossing picture of the lives of five Russian citizens from Moscow, one that may have benefited greatly from a stronger guiding hand from its director. It has an interesting story, it has thoughts that could be explored with more depth, but the film doesn’t corral them into a defined shape. It’s a very good movie, and it works, but with some restructuring of its own, I feel that it could have had more bite.