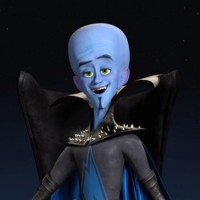 There are dozens of examples of movies that were separated at birth, yet are released just around the same time as one another. It’s almost like it’s some kind of conspiracy, y’know? One movie studio gets word that the other is making a comedy about mall cops and we get Observe & Report alongside Paul Blart. A thriller about magicians in the early twentieth century? Hello The Illusionist, bonjour The Prestige. And for 2011, two words: Snow White. All of which is to say that it’s nearly impossible to consider the Will Ferrell-voiced Megamind without also mentioning the Steve Carell-voiced Despicable Me.

Both movies are about villains with hearts of gold, which I imagine was part of the pitch that sold the studios on the concept. It’s about a killer, right, but he like, he’s a good guy at heart, yeah? And so he’s, like, he’s all twisted up inside because he can’t square his criminal lifestyle with the humanity bubbling underneath. OH MAN, sounds awesome. Can we make it about super-villains fighting super-heroes instead? And what about making it a CGI comedy aimed at 8-12 year olds? BRILLIANT.

I’m being hard on both movies unnecessarily. It’s possible to take a dull pitch and make something more out of it, and both movies achieve that to some degree. I’d say that Megamind manages the feat to a slightly greater degree than its twin. Both movies are light, the villainy of their villains is never addressed in much detail. There is a point in this film where our protagonist literally incinerates another man, but the moment is quickly cast aside to make room for bigger ideas about a super-villain suffering a severe crisis of identity. On the surface, that sounds like a mighty cerebral concept for a children’s movie, but the filmmakers do precious little with it. Aside from Megamind feeling sad and sometimes explaining his feelings to the audience (“I feel so melancholy”), the struggle between these two diametrically opposed values – where he finds himself feeling positively about both evil and kindness – is not well balanced. Perhaps it’s not surprising, then, that the movie essentially flips back and forth, like Fred Flinstone trying to make it to the party at the Water Buffalo lodge and to Pebbles’ birthday party at the same time. Here’s a scene of Megamind proposing some diabolical plan, here he is being sweet on the lady reporter Roxanne (Tiny Fey). Uh-oh, now here he is trying to keep both lives separate from one another in a hilarious scene where he has to switch back and forth from good to evil repeatedly. Hilarious, I tell you!

I don’t know why I’m being so hard on the movie. I enjoyed it in the moment, and there are certainly several funny scenes. Megamind’s mispronunciations of words are a cute gag, and the relationship between our protagonist and his side-fish Minion (voiced by foul-mouthed comedian David Cross) is sure to leave audience members with a smile. There’s really not much to Megamind’s nemesis Metro Man, though, so maybe it’s best that he bows out of the picture fairly early on. A subplot involving a new super-hero rising creates big, loud bangs of tension in order to keep the action moving but does little for the smaller story – the one about Megamind’s changing psychological state.

Am I wrong to see mature themes in the material and then to expect that the film would follow through on them? I’ve drawn this parallel a million times, but I often think about Disney’s magnificent Lady & the Tramp. Do you remember what the centerpiece of that movie was? Two dogs having spaghetti. Forget that they’re dogs for a moment, if you can, but that movie was mostly about two characters that slowly fall in love with one another despite initial misgivings. Almost the entirety of the movie is about these two characters spending time with one another, enjoying each other’s company. The movie darts off into useless B-stories still (the Siamese cats, in particular, are awful), but the heart of Disney’s classic is in that Bella Note. Even if we give Megamind the benefit of the doubt and say that the film’s heart comes in this bad guy and his desire to change his scheming ways, is that handled with any dexterity? Do the characters grow as the movie progresses, or do they just change?

There are times when there are the briefest hints of something more, just as there are in Despicable Me, but nothing real is ever really addressed. There’s a reason that this movie was released in theaters in 3-D: because it’s all about the spectacle. It’s not about a man working in an office, it’s about super-heroes. It’s about flying around and flashes of light and giant mechanical monsters. It’s about enlarging things to the point where a fish is a gorilla and rejection leads to homicidal rage. I don’t know when I stopped being okay with cartoons being funny and expecting little more from them. I guess I just hold them to the same standards that I hold all movies now. What is that standard?

A movie doesn’t have to be serious or real, necessarily. What it does need to do is be serious about what it’s trying to accomplish. Unfortunately, Megamind doesn’t know what it is trying to accomplish. It wants to have hints of deeper thematic meaning, but relies too heavily on broad gags and bright colors for the bulk of its substance. But it’s a fine kid’s movie because we all know kids won’t demand much more. Come to think of it, neither to adults. Regardless, there are films that are designed to appeal to younger audiences that nevertheless excite me, make me eager to watch. This isn’t one of them. It’s a fun diversion, but little else.