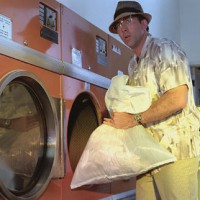 The A.V. Club, pretty much the only site that I ever read for film criticism and therefore the one I reference in practically all of my reviews, recently had a piece over Nicolas Cage’s first appearance in Moonstruck. The article was ostensibly about that one scene, but it turned into an eloquent appreciation of Cage as an actor, which I thoroughly enjoyed – being a Cage addict myself. The author wistfully recounts a time when the actor put his all into every role. “Nearly every performance back then was a fearless high-wire act, regardless of the context,” the piece reminisces. “Often, he seemed to be acting in a completely different – and usually far more interesting – movie than any of his costars.”

Perhaps it’s fitting then, that this is the last older Cage movie I have left to review (provided I never see Never on Tuesday, although Cage’s inclusion in that film is a mere walk-on). In Matchstick Men, it becomes clear that the piece is much better than the sum of the parts; Cage is a stand-out in an otherwise lackluster relationship-thriller.

Altogether, it’s the story of a con-artist named Roy (Cage) who has an endless array of tics and neuroses. He is psychotic about cleanliness, goes into fits when the outside world gets too close to him, and obsessively opens and closes doors. He’s a mess. His partner in crime is Frank (Rockwell), who serves as a mere back-up player to Roy’s intricate crimes and nothing more…….? Then enters Angela (Lohman), the daughter that Roy never knew he had, a revelation which turns everything on its head. How can a man who makes a living from taking advantage of other people open himself up to his own daughter? Things are going to get wacky! And heartfelt.

So the story becomes about Roy’s balance of his work life with his home life, the man who never had children adjusting to the inclusion of a teenager in his life. This is all pretty yawn-worthy stuff. There’s some excitement to be had when Roy realizes that the best times he spends with his daughter are when he includes her somehow in his work, but this is not given the focus that it deserves. Instead of opening up a new facet of the characters’ relationship, it simply serves as a catalyst for plot devices. During this time, Rockwell seems to exist for the same reason: he drives the plot forward by introducing new external forces and by narrating the action. “This isn’t good for us,” he muses when he learns of Roy’s new responsibilities. OH, BECAUSE SHE’S GOING TO INTERFERE WITH THE CONS. I GET IT.

But Cage saves an otherwise mediocre movie by, well, by committing to the character. He gives himself nervous twitches, he gesticulates wildly, he easily goes into barking anger or defeated tears. Some might call this over-acting, but I side completely with Ebert when he says that “Cage is accused of showboating, but I prefer to think he swings for the fences. Sometimes he strikes out, but more often he connects. He has a kind of raging zeal that possesses his characters; what in another actor would be overacting is, with Cage, a kind of fearsome intensity.” Exactly.

Late in the film, there’s a scene that takes place in a pharmacy. Roy is off is meds and growing increasingly unruly. He breaks in line in front of a long line of people, much to the consternation of the other customers. When one customer confronts Roy, Cage shoots back: “Have you ever been dragged down the sidewalk by your hair until you PISSED BLOOD?” It’s a manic moment, the kind of surprising thing that the Moonstruck piece is referring to when they reminisce about a time when “A sense of genuine danger accompanied [Cage] from role to role, as if at any moment, we might witness some sort of unscripted, inexplicable act of self-combustion.” Furthermore, there are some genuinely tender moments between Roy and his daughter, most of which are often the product of the surprising chemistry between Cage and Lohman, as opposed to the script-writing. Often, the script states things too bluntly (e.g. “You’re not a bad guy, you’re just not a very good one”).

What really hurts the film, though, is its insistence on a twist ending. The ending feels very much forced, and if you spend too much time thinking about it, the plot-holes become too obvious to ignore. It requires the inexplicable collusion of seemingly minor characters from throughout the film, and all for a wholly unsatisfying conclusion. This is likely why an epilogue was tacked on. IMDB Trivia tells me that audiences were expected to be unhappy with the ending before the epilogue, the implication being that the dumb viewers needed to be sated with a more, well, conclusive ending. Personally, I feel that the epilogue was necessary precisely because the original ending was so weak. It’s like being invited to a lavish dinner party, watching the food be prepared and set out on the table, and then to watch the host pull the tablecloth out from under the food – Ta-Da!- and send you home without supper because the trick was all he had intended from the beginning.

The epilogue doesn’t save the movie anymore than Cage’s exuberant performance does. But it breathes a little bit of life into a film that consciously avoids getting in too deep because it’s more interested in card tricks than playing a great hand.