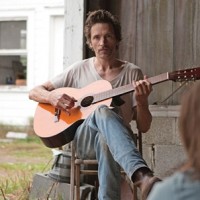 The tongue-twisting Martha Marcy May Marlene has that good old-fashioned independent film spirit. It deals in limited sets – a lake-side vacation home in present-day scenes, a family cottage for those in the past – and its story is largely internal. There’s a scene where the subject of the film, Martha (Elizabeth Olsen) breaks a car’s window and scratches the paint: I think it may have been the most action-packed scene in the film. Which is not to say that the movie is boring, but it is pointedly reserved about what it’s getting at. The plot unfolds carefully, giving the viewer little bits of information about the time that Martha spent as part of a religious cult, while giving us the full picture of her fractured state of mind in those present-day scenes. The idea is compelling, but Olsen is unfortunately given little to work with.

Above, I said that the story is largely internal; perhaps I should refine that statement. The story intends to be largely internal, but it lays its ideas flat on the table before simply mulling them over. Martha calls her estranged sister from a roadside, sobbing, and the siblings reunite after years apart… but of course Martha does not seem at ease. She acts withdrawn, quiet, combative, due to the skewed morality that she was taught by the cult leader Patrick (John Hawkes, Winter’s Bone). We witness Patrick’s soft brutality, in scenes such as one where he bursts into the girl’s room with fire in his eyes, pinning her to the wall by her throat, then claiming that he cares deeply about her. We see how Martha could be traumatized, in the peer pressure and brainwashing that led her to become a willing victim of sexual abuse. Where the movie trips up, though, is in forgetting the adage “show, don’t tell”. In the present-day, Martha breaks things and lashes out verbally at her sister without provocation. It’s obvious that the stuff she endured as part of the cult is what drives her to act this way, but we don’t get a sense of what drives her to act this way. At one point late in the film, Martha stands at the top of a staircase while her beleaguered sister stands sighing below. In a fit of concentrated malice, Martha spits at her sibling, “You’re going to be a terrible mother.”

Olsen certainly holds her own in the role, convincingly evoking the character’s mixture of wide-eyed naivete and paranoid cynicism, but the movie’s choice to simply exhibit the ’cause and effect’ of the girl’s state of mind feels like a mistake to me. Showing the ’cause’ and then really diving into the effect would have made for a more, ahem, effective film, in my opinion. The movie accomplishes this in a wonderful way through a bit of Hollywood magic called editing. The trailer features a quote from a critic claiming that the film “shifts nearly imperceptibly between dream, memory and reality”. That’s not just flowery language; the best moments are ones where the line between the past and present is blurred. It’s such a small thing, but I was moved by a shot where Martha, sitting next to a friend in the yard of the house where Patrick plies at the minds of teenagers, stands suddenly and finds herself by the lake with her sister in Connecticut. This was more interesting to me than the image of a sinister Patrick instructing our girl Martha to shoot a kitten, then a man.

It’s not that the “gun scene” didn’t work for what it was – the tension here is palpable indeed, though then again tension tends to arise naturally when you introduce a loaded gun into a scene and start waving it around at people. But the set-up is enhanced considerably by the presence of John Hawkes, who proved in last year’s Winter’s Bone that he can do menacing with ease, even if the dialogue he’s given is nothing to write home about. Seriously, I can’t foresee Sean Durkin (who also directed) winning any awards for the screenwriting. With that said, the aforementioned slide through time does more to give life to Martha’s mental state than does her drone-like repetition of the phrase “I am a teacher and a leader”, a designation which Patrick used to describe the girl in one of the previous flashbacks. Highlighting the sexual abuse that Martha suffered, then having her freak out when she sees her sister’s husband in the dark (because she thought he was going to molest her, you get it?) only tells us what’s going on in Martha’s mind. Drifting from a memory of cooking food at the cult house, only to have the words of a fellow cult member splice with those of Martha’s sister as we come back to reality – that shows us the score, in a way that’s infinitely more entertaining and emotionally charged. Jeff Nichols’ extraordinary Take Shelter, which came out earlier this year, ran with this philosophy to great results.

In fact, the more I think about it, the more I realize that the majority of Martha Marcy May Marlene is remarkably shallow. It gives broad, easy answers to what it is that so badly messed our protagonist up – to the point that her story is less about losing one’s self-identity at the hands of a charismatic individual with selfish goals, and more about remaining paranoid after being party to unspeakable atrocities. There are, I think, only three times that the thread through time is utilized. Instead, we’ll get a scene of Martha gardening with other women on the compound, then later hear her sister’s amazed proclamation: “You’re really good at gardening!” Cause and effect. It’s not that, say, the smell of the dirt brought her back to the memories she’s trying to leave and her sister’s voice jolts her back to reality. Instead, it’s Event A happened, and Event B has a surface-level correlation. She thinks her sister’s house is too big… OH, it’s because she used to live in a house where twelve women shared one bedroom!

So the movie is notable for the strong performances of Elizabeth Olsen and John Hawkes, certainly, and though I didn’t mention it previously there is some stunning cinematography (that shot of Olsen running across a street and into the woods is vaguely chilling, even out of context). And there are times where the movie spells out the story in a useful manner, as I’ve noted. But mostly, the plotting is clunky and the dialogue is awful. Martha Marcy May Marlene is like a plane that can’t fly; it has a gorgeous paint job and it looks elegant when it taxis down the runway, but that’s just not enough.