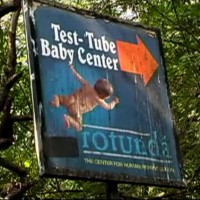 As documentaries go, Made in India is fairly straight-forward. It moves in chronological order, and though it has some moments of intense emotion, it never seems to present a point of view. It’s a story about surrogacy in India, essentially when couples (like Lisa and Brian Switzer from the United States) go to the country in order to allow a woman there to carry their child. The film does acknowledge that the conditions for the surrogates are difficult, that the system is flawed and a lot of that is due to the country’s reluctance to acknowledge that the industry exists at all. But where other films might demonize some player in the machinery, here there is no such stand. In that way, I have some mixed respect for what filmmakers Rebecca Haimowitz and Vaishali Sinha accomplished. By remaining matter-of-fact and dispassionate, the movie allows its viewer to peer into this world without feeling manipulated; on the other hand, it leaves the finished product feeling oddly lifeless, without a recognizable voice.

There are certainly intimations of what the conditions in India are like for these surrogate mothers. When the Switzers arrive in the country, they are surprised by the living standards in Mumbai. The couple lives comfortably, economically speaking, given that they have the ability to make repeated trips across the world, eschewing work for weeks on end while dealing with the surrogacy clinic. But on the streets of the city, poverty reigns. The streets are severely over-crowded, with garbage littering the sides of the streets and children begging for hand-outs. Seeing this image, I wondered whether the Switzers felt any sense of guilt over the lives that their choice to come to India would be affecting. But the documentarians rarely sit their subjects down to pose such pointed questions at them, so the question doesn’t get asked and only partially answered. The desire to overcome their inability to have children naturally has led them here, and there’s no second thoughts when you’re wandering the streets of Mumbai.

Meanwhile, the film also chronicles the choices of Aasia, the Muslim woman who agrees to carry the Switzers’ child after tricking her husband into allowing it. I suppose you might say that there’s some kind of judgment drawn by the way that the film parallels the journey of the American couple with that of the Indian woman who assists them. Where the Switzers utilize technology which allows them to speak to each other despite being separated by thousands of miles (during times in which Brian returns to the States), Aasia is taken to a sort of halfway house for pregnant women where she is not able to stay in contact with her husband or children. Aasia agrees to be a surrogate primarily for the money and has to live the next nine months with a sense of shame – hiding the truth of how she became pregnant from friends and family. The Switzers, however, hold a jubilant baby shower and appear on national television with smiles on their faces. While it’s clear that there is a parallel to be drawn here – it’s intriguing to note, for instance, that the Switzers are shown walking through New York City in what has to be the one area that is clean and unpopulated – I don’t think its judgment so much as observation.

Then again, a lot of the later part of the movie details the run-around that the clinic gives to Aasia when it’s time to pay up. She is supposed to receive $7000, or so the American couple was told, but ends up receiving $2000 or less. The staff of the clinic seems unconcerned with the discrepancy, making the obvious question: is this how they do business regularly? Again, though, the filmmakers don’t say this aloud. If they did, it’s likely that the clinic would refuse to respond. There’s also a long section where Aasia is rushed to a public hospital which turns into a bureaucratic nightmare of paperwork, the hospital refusing to release either the surrogate or the child she gave birth to. We see the building only from the outside, as a title card explains that the hospital refused to let cameras in. This has the tendency, in documentary, to make it appear that there is something to hide. In Food, Inc., fast food chains were asked to comment on the sensationalist claims that the filmmakers made, then made to seem sinister with the implication that “no comment” was a tacit approval of brutality to animals, etc. Likewise, the hospital’s refusal to allow cameras in makes it appear that they deal in false imprisonment on a regular basis, no matter how untrue that is.

But the clinic itself does what it can to get the Switzers access to their child. The staff takes care of Aasia to make sure that her pregnancy goes smoothly, even if their ultimate reasoning for this is the dollar signs that accompany a successful childbirth rather than concern for the woman’s well-being. It is a for-profit business, though, and what we see as deflection and unfair business practice may seem commonplace in Mumbai. When the Switzers go to purchase goods at market, they are told that there are no set prices: everything is done by haggling, by negotiating an amenable resolution for both parties. Is the clinic’s attempt at giving less money to Aasia a late-in-the-game haggling strategy, to see how low they can drive the price? I can’t say with any certainty. The movie, once again, may nod toward the iniquity of the system, but ultimately refuses to place its cross hairs on any one party.

In the end, the surrogacy industry in India is just that: an industry. Its focus is on churning out its product (babies) in as cost-effective a manner as possible. Until the national government takes a stronger interest in regulating the industry, corners will be cut whenever possible. To some, this is a benefit; to others, not so much. But everybody is working for selfish reasons, even if the degree differs wildly. As long as there are those who are willing to contribute to the system as it is, it will thrive. It feels like the film should end with a call to action, but it’s really not that kind of movie. All it really intends to do is give the viewer a glimpse of the lengths one will go for a child, or for money, and how easily that can be exploited. Made in India is a look inside of a growing system, lurching forward and gaining strength. It’s up to you how to respond to that.

2 Responses to “Made in India”