Wheelchair Chase
Mac and Me — MOVIECLIPS.com
Embed This Video 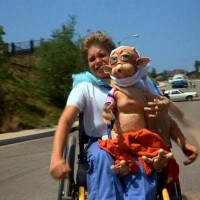 In this day and age, if Mac & Me is remembered at all, it is as a hare-brained knock-off on Spielberg’s E.T. (or should I go the Super 8 route and call it an homage?). Both films feature adorable kids who befriend curiously human-like aliens while the government stumbles around trying to locate said alien in order to perform sick medical experiments on it. In addition, both films have extremely conspicuous product placement. Mac & Me is unfairly remembered for being one long McDonald’s advertisement. Not that McDonald’s isn’t featured prominently in the film, but this reputation does a disservice to the greater, more awkward and constant product placement by Coca-Cola. As we soon find out, the only thing that keeps aliens alive on Earth is that sweet nectar from Atlanta, Georgia. As one character theorizes, “Maybe this is like what they drink on their planet.” Yes. Maybe they drink Coke on Mars.

The Coke conundrum is the most visible of oddities in the film, but it’s hardly the worst. I’m tempted to give the “worst” title to a scene in which Alan “Smithee” Silvestri lifts note-for-note his iconic score from Back to the Future because, I don’t know, he stayed up all night partying and had to finish this movie’s score before class started in the morning? Paul Rudd is fond of pointing to a scene where our invalid protagonist Eric careens off of a cliff in his wheelchair and plunges into a pond with no discernible injury. Christ, this entire review could be an endless list of bizarre and incredible moments. There is a sequence which takes place at McDonald’s; perhaps it sticks in the minds of most viewers because the customers all spontaneously get up and break into an intricately choreographed dance routine (including a group of football players in full gear, for some reason)… all while our little alien friend, by now going by “Mac”, dances on the counter-top to the applause of Mickey D’s employees like he’s Roger Rabbit. Is it a coincidence that that movie, too, was scored by Silvestri? Hmm. Oh, and did I forget to mention that the alien is dressed like Nicolas Cage in The Wicker Man during the counter-top dance? You better believe it.

I really could go on and on, but I’d rather save some of the surprise for when you watch the movie. Okay, one more. There’s a remarkable moment (see the video accompanying this article above) where Eric and Mac evade pursuers at speeds in excess of 70 miles per hour, while the good citizens of Sacramento speed wildly out into the street or inexplicably slide across the pavement. At one point, Eric appears to get clipped by a vehicle that narrowly misses his wheelchair, but he keeps on going like the Enagiza bunny. There’s a point somewhere in here where the movie asks its viewers to stop suspending their disbelief and just start accepting the absurd – and it is going to become so, so absurd. The final moments of the film are stolen directly from the finale of Short Circuit 2, released the same year.. hmm.. and they are just as out of place here as they were in Johnny 5’s picture.

I’d like to find something positive to say about the film, so I guess that for the most part director Stewart Raffill alongside cinematographer Nick McLean (fresh off of the one-two punch of Spaceballs and, ahem, Short Circuit) have composed an adequate picture. Aside from some ridiculous stunts done with obvious dummies – there’s one moment in particular where a character would clearly have broken her legs in multiple ways if she had actually been party to the event on-screen – most of the smaller moments are done with little to complain about. The slow reveal of Mac as Eric cautiously wheels himself around the house in pursuit of a toy car that has come to life on its own is done with a certain level of restraint, for instance. However, the vast majority of the film is big on action. When Mac shoots across a crowded highway early in the film, the drivers on the road all forget how to drive and crash into one another in a huge, mangled mess. One truck even launches into the air. The police characterize it as a minor accident, saying that a raccoon or something had simply frightened somebody.

I tried to say something nice about this movie, really I did. It’s just too damn hard, though, because I started thinking about the fact that a plot point late in the film is ripped directly from The Terminator. And it’s not the scene where the aliens ransack a grocery store because they need to pick up another twenty-four pack of refreshing Coca-Cola. Oh man, and the actors are so awful. Christina Ebersole as Eric’s mother and Jonathon Ward as his brother Michael are both stand-outs when it comes to over-the-top, ridiculous performances. It doesn’t help that their characters act in insane ways, such as when the two of them blast the wheelchair bound younger child for moving all of the family’s furniture onto the lawn and filling the livingroom with all kinds of plants. “How could you do this?” they demand accusatively, the shame at Eric’s lack of respect for his family’s possessions apparent on their faces. Instead, they should be asking, “How could you do this?”

I wish that there were a movie I could think of to compare this to. One IMDb user helpfully suggests Showgirls. I know that not many are familiar with the title, but the closest I can think of is C Me Dance. The theme between these three titles is that they extend beyond being bad, beyond being unbelievable, and become unthinkable. Not morally repugnant, necessarily, but so divorced from all of reality that it’s hard to believe that anybody would have put time into them with any measure of sincerity. It’s scene after scene of jaw-hanging-open-in-utter-disbelief insanity, and if you’ll allow me to throw one more movie connection onto the fire, I swear that the sounds that Mac makes are straight from the mouth of R2-D2.

Yep, there’s something amazing about Mac & Me. The fact that it exists at all.